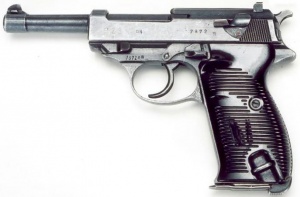 Ferdinand aims a pistol while performing for tourists.

The dwarf (Jimmy Karoubi) holds two handguns, one of them is a Walther P38.

One of the gangsters (Roger Dutoit) picks up the gun...

...and aims it at Ferdinand in the bath.

Marianne Renoir (Anna Karina) has a nickel plated Colt M1911 pistol on her bedside table. The pistol is fitted with an early type magazine with integral lanyard loop.

The dwarf aims his gun at Marianne.

Ferdinand pulls the revolver on the man in the car.

Fred (Dirk Sanders) (right) in the car shoots the driver of some gangsters with a Colt Official Police revolver.

Three SMGs are seen leaning on a bedroom wall. On the left is an M1A1 Thompson.

Among the submachine guns propped against the wall is a United Defense M42.

Among the submachine guns propped against the wall is a MAT-49 with the empty magazine well in the folded position and the stock extended.

MAT-49 with magazine well in the folded position - 9x19mm

The MAT-49 is the middle of the three guns.

An M3 "Grease Gun" is seen hanging off a radiator.

MAS-38 and MP40 submachine guns are seen in the OAS arsenal.

The dwarf (Jimmy Karoubi) inspects both the MP40 and MAS-38.

Marianne Renoir (Anna Karina) uses a Mauser Gewehr 1898 rifle with a scope, which she had taken from the OAS arsenal. The characters talk about the weapon:
Marianne: "Give me the rifle".
Ferdinard: "The same make that killed Kennedy!"
Marianne: "Sure, didn't you know it was me?"
It should be noted a Carcano M91/38 Short Rifle was used to assassinate John F. Kennedy.

The sniper rifle in Marianne's bedroom was fitted with a silencer.

Marianne anticipates the arrival of the gangster's car with rifle in hand.

Marianne has her sights on the first of the gangsters.

Marianne hands Ferdinand a sniper rifle while fleeing her apartment.

Marianne shoots the gas tank of a car owned by a dead member of the OAS.

An MG34 machine gun is seen next to a murdered OAS member lying on a bed.