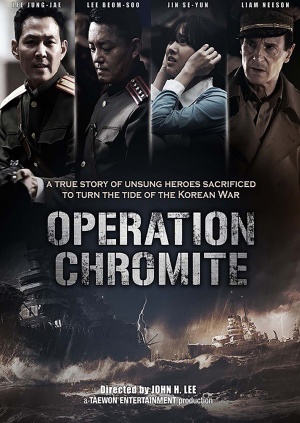 Operation Chromite (or The Battle for Incheon: Operation Chromite) is a 2016 Korean War film, directed by South Korean director John H. Lee (born: Lee Jae-han). The film covers a fictionalized account of the espionage actions of the X-RAY team with the assistance of the Korean Liaison Office that eventually led to the successful Incheon Landings. The film is notable to Western audiences for co-starring Liam Neeson, who portrays General Douglas MacArthur in the film.

The film is part of a trilogy of Korean War epics produced by Taewon Entertainment, with a sequel, The Battle of Jangsari released in 2019, which covers one of the diversionary assaults made to cover for the Incheon Landings depicted in this movie.

The following weapons were used in the film Operation Chromite:

Members of X-RAY are provided with Colt M1911A1 handguns fitted with sound suppressors by the KLO (Korean Liaison Office) fighters for the extraction mission in the hospital. US and South Korean marines are also seen with standard-issue M1911A1 pistols during the US-South Korean joint raid on Wolmido Island.

An X-RAY operative attaches a sound suppressor to his M1911A1 before a mission.

Jang Hak-soo (Lee Jung-jae) fires his suppressed M1911A1 while disguised as a doctor in the hospital.

The suppressed M1911A1 dropped on the bed of the truck as the team removes their disguises.

Hak-soo loading up his regular M1911A1 before the final mission.

Hak-soo aims his M1911A1. Despite the blur, his pistol appears to be nickel plated.

The Mauser C96 "Red 9" with black grips is seen carried by Korean People's Army Commander Lim Gye-jin (Lee Beom-soo) as his personal sidearm. Notably he is only seen reloading his weapon with individual cartridges, not having once seen using stripper clips. 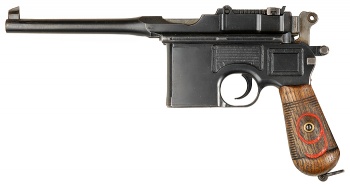 Lim Gye-jin practices his aim with his C96 at paper-drawn caricatures of US leaders on a firing range.

Gye-jin reloads his C96 with individual rounds. Here you can clearly see him inserting 9x19mm cartridges into the breech, confirming this pistol's identity as a "Red 9" variant.

The C96 is seen in a holster. Here you can see its black-painted grips typical of 9mm C96s.

The C96 with the charging handle locked back after Gye-jin completely expends his pistol's magazine.

Gye-jin fires his pistol while riding on a jeep.

The pistol jams at a pivotal moment in the film's climax. Note that while the scene tries to portray the weapon clicking dry (with Gye-jin immediately trying to reload afterwards), the bolt here clearly isn't locked back indicating some kind of malfunction or misfire.

The Tokarev TT-33 is depicted as the standard sidearm of the KPA forces and also carried by the members of the X-RAY team while disguised as a North Korean inspection crew. 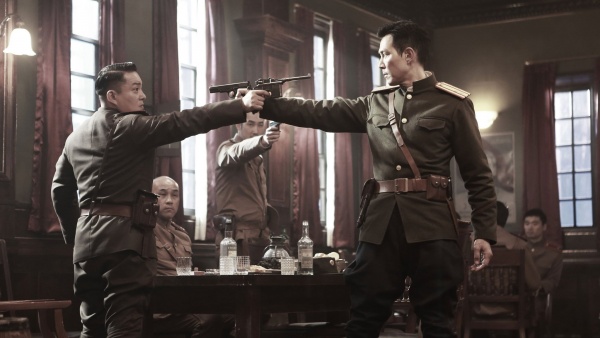 An enraged Jang-choon orders his men around while holding his own empty TT-33.

Hak-soo points his TT-33 at Gye-jin, who returns the gesture with the latter's own C96.

North Korean officers pull out their TT-33s during the tense bar standoff.

Female KLO operative Kim Hwa-young fires her M3 "Grease Gun" out of the truck. Note the charging lever indicating this weapon as the older M3 model instead of the newer M3A1.

The M3 "Grease Gun" caked in the wounded owner's blood.

X-RAY member Jo In-gook (Jin Yong-ok) scales a wall with his PPSh-41 slung on his back.

A disguised X-RAY operative points his PPSh-41 during the bar standoff. Here you can see the rear sights of the gun.

Ki-seong (Park Chul-min) suppresses enemy soldiers on a balcony with his PPSh-41.

A PPSh-41 (circled in red) is seen holstered on the back of an army motorcycle.

A South Korean marine is seen carrying a PPSh-41. Either he was issued with an enemy weapon alongside his M1 Carbine before the landings, or it is recently acquired.

KLO resistance fighters and US Marines are seen with the earlier M1 Thompson submachine guns, as noted by the older, more cheaply manufactured L-peep sights.

A side view of the Thompson. Note the L-peep sight clearly seen in this shot.

Jin-cheol fires his Thompson at North Korean guards at the Wolmido lighthouse.

Hak-soo readies his M1 Thompson during the climax of the film.

US and South Korean marines are seen using M1 Carbines during their assault on the lighthouse.

Jin-cheol scans for targets during the raid on the lighthouse.

An South Korean marine scans the beach with his M1 Carbine.

A South Korean and US Marine are seen escorting General MacArthur (Liam Neeson) on the beach with their M1 Carbines slung.

Dae-soo (2nd from the right, top row) poses for a photo with his M1 Carbine during a flashback.

South Korean and US troops are seen using M1 Garands during the execution of Operation Chromite. Several members of X-RAY are also seen with this rifle.

X-RAY and KLO members pay their respects to a fallen fighter, whose grave is marked with an M1 Garand.

An US Marine snipes a North Korean sentry with his M1 Garand.

Hak-soo picks up an M1 Garand while holding a rifle grenade flare with his other hand.

The flare round is fired from the Garand. Normally shouldering an M1 Garand while firing a rifle grenade is not advisable due to massive recoil, but said recoil is actually dependant on the load of said grenade.

Marines in a Higgins landing craft with their M1 Garands.

North Korean conscripts are seen in a truck with their Mosin Nagant rifles resting between their legs.

KPA troops respond to the bar standoff with an assortment of Mosin Nagant rifles as well as PPSh-41 submachine guns.

During the escape from the hospital, the X-RAY operatives unveils a Browning M1919A4 mounted on a tripod hidden in the back of their truck. US and South Korean marines are also seen holding M1919A4s during the landing at Incheon.

Hak-soo charges the M1919A4 before firing on pursuing North Korean forces. On closer inspection, the machine gun here is clearly being fed with crimp-nosed blank rounds.

The M1919A4 in the back of the truck. Note the lack of ammo belt in this scene.

The M1919A4 in the back of the truck (sans rear canvas cover, due to taking damage from a building's low roof). Here, the tripod is clearly seen.

A Marine is seen holding an M1919A4 (circled in red) while being deployed to Incheon via Higgins landing craft.

KPA troops are sometimes seen with the DP-28 machine guns, either carried by infantry or mounted on KPA vehicles, including several Soviet BA-64 armoured cars.

The DP-28 is mounted on the back of Gye-jin's jeep.

A KPA soldier fires the mounted DP-28 from the back of Gye-jin's jeep.

A North Korean soldier is seen brandishing an M20A1 "Super Bazooka" while chasing down fleeing South Korean operatives. While it is possible that the DPRK forces could have captured and used American equipment during the opening stages of the war, the M20A1/B1 model was not introduced untill near the end of the war, making this an anachronism. American troops are also seen carrying such launchers near the end of the film.

A KPA soldier pulls out a Bazooka from his BA-64 armoured car. It is not exactly clear when or where did it come from; either it was stored within the armoured car in which would have made it's extraction awkward due to the cramped open top, or some other soldier passed the weapon to him mid-chase, which is just as unlikely.

The rocket from the Bazooka in mid-flight.

An US Marine with an M20A1 (circled in red) over his shoulder while marching in the street.

In the climax of the film, Jang Hak-soo retrieves an M1 Garand fitted with an M7 rifle grenade launcher to fire a flare round in order to signal the US forces. Presumably the rifle was pre-loaded with blank rounds specifically to launch the flare, as it did not see conventional use before or afterwards.

A flare round for a rifle grenade launcher is passed to Hak-soo.

Hak-soo fires the flare with the M1 Garand's M7 launcher (circled in red). 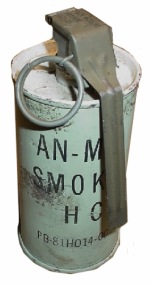 An AN/M8 smoke grenade is seen sitting on top of a barrel.

A smoke grenade is seen on the ground after deployment. Note the markings clearly printed on the canister.

Hak-soo pulls the pins of both grenades before tossing them all at once.

Mk 2 hand grenades are used as part of an improvised fuel bomb to delay DPRK forces during the chase scene. Jang Hak-soo is seen throwing several Mk 2 grenades from his commandeered vehicle during the climax of the film. 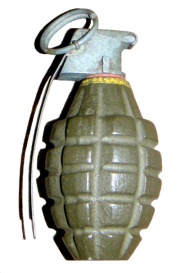 In typical Hollywood fashion, Ki-seong pulls the pin of the Mk 2 grenade with his teeth while his other hand clutches the jerrycan. In reality, the force required to pull a safety pin from a grenade is very likely to break your teeth. 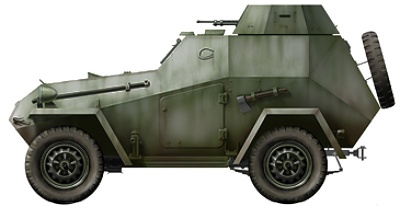 A BA-64 armoured car, with its gunner now wielding an M20A1 Bazooka.

North Korean defences at Incheon include an impressive battery of Soviet-made 203mm B-4 Howitzers to retaliate against the invading American Navy. 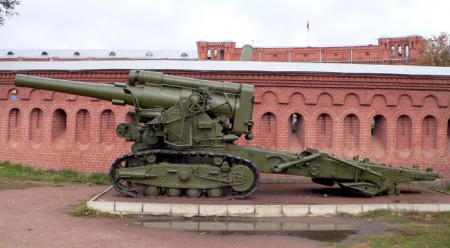 KPA artillerymen assemble in front of their guns.

A Soviet 203mm B-4 howitzer ready to fire from a concealed bunker.

Several T-34-85 tanks with mounted Degtyaryov DT machine guns make an appearance. Due to the sheer numbers of T-34 tanks produced during WWII, the Soviet Union provided their client states with thousands of such tanks during the satellite conflicts in the following years, including North Korea during the Korean War.

Two T-34-85 tanks stand guard outside the gates of North Korean High Command. These appear to be CGI.

A T-34-85 looms into the battlefield during the finale of the film.

In the finale of the film, X-RAY forces led by Hak-soo commandeer a North Korean SU-122 self-propelled gun to use against the North Korean artillery battery. It appears to be a mockup due to the much smaller cannon and open-top design atypical of the SU-series of tank destroyers.

The SU-122 rolls into the North Korean artillery camp.
Retrieved from "https://www.imfdb.org/index.php?title=Operation_Chromite&oldid=1398620"
Categories: