In around 1935, the Japanese Nambu Arms Manufacturing Company designed two experimental submachine guns, the Type I and the Type II (alternately Model I and II, which differentiates the use of the character 型 gata from the more common 式 shiki used on other Japanese weapons that are typically translated as "Type"). The number of produced guns is very small, and neither were officially adopted by the Imperial Japanese military, only used in very limited numbers. However, despite their already incredible rarity, some of the Type II submachine guns were copied by the Mukden Arsenal in Northeastern China after WWII, converted to .45 ACP and using Thompson magazines; some even popped up during the Korean War.

Information on the two experimental models were muddled, particularly with their designation; the Type I is alternately designated "Nambu Model I" or the "Type IIA", which suggests that both weapons were all under the same "Type II" classification, just with different models. IMFDB formerly used the derived names "Type II Model A" and "Type II Model B" to refer to Type I and Type II respectively. Japanese sources however, made no mention of the Model A/B sub-classification. IMFDB's designation is derived from the Japanese sources, who generally designated the two models as "Experimental Type 1 Submachine Gun" (試製一型機関短銃, Shisei-ichi-gata kikan-tanjū) and "Experimental Type 2 Submachine Gun" (試製二型機関短銃, Shisei-ni-gata kikan-tanjū). Nambu's third experimental design, Experimental Type III (試製三型機関短銃, Shisei-san-gata kikan-tanjū), designed in 1939, was the prototype of the Type 100 submachine gun.

The Type I was one of the first SMGs that used the pistol grip as the magazine well.

A variant of the Type II for vehicle crews is said to have been made near the end of WWII according to Japanese sources.

The Nambu Experimental Submachine Gun and variants can be seen in the following films, television series, video games, and anime used by the following actors:

Nambu Type 1 - 8x22mm Nambu. Nambu Type I. The writing on the stock "試一型" means "Experimental Type I". Note the metal handgrip underneath the barrel, a detachable component not present on the diagram below. 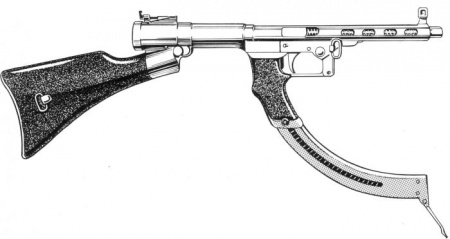 Japanese Experimental Type I submachine gun sketch (8x22mm Nambu). Note the strange spike underneath the magazine; it's actually a hinged latch that could be fitted to a vehicle mount.

Japanese Experimental Type II submachine gun - 8x22mm Nambu. This is the improved model for vehicle use, with a shortened front end. Some of these models were further modified/improved, with a visible added indentation in the foreend.