The Mummy: Tomb of the Dragon Emperor is the 2008 sequel to 1999's The Mummy and 2001's The Mummy Returns. Rob Cohen takes over as director and the Mummy character now originates from China instead of Egypt. Brendan Fraser returns as Rick O'Connell and Maria Bello takes over the role of his wife Evelyn O'Connell.

The following weapons were used in the film The Mummy: Tomb of the Dragon Emperor:

Rick initially uses a Colt 1873 Single Action Army "Peacemaker" as an effective method to catch fish after getting frustrated while learning to fly fish back in England. He later shows this revolver to Alex when the two of them are comparing weapon choices. He also uses it to fire a few shots at the Emperor.

In this publicity image, the Colt SAA can be seen in the background as the gun to the bottom.

Rick shows off his "Peacemaker".

Evelyn O'Connell (Maria Bello) can be seen using a pair of FN Hi-Power pistols during the undead battle. Alex O'Connell (Luke Ford) also uses a pair, as well as Roger Wilson (David Calder) who uses one pistol to threaten the O'Connells and shoot at the assassin in the Emperor's Tomb in an early scene. Alex also keeps a pair in his weapons box next to his Walther P38s.

The first model of the classic pistol, developed by John Browning and adopted by Belgium in 1935, the FN P-35 - 9x19mm Parabellum. During World War II, the Germans would occupy the Belgian firearms factories and continued to produce this gun, still called the P-35, but with Waffenamt stamps. The Design would be adopted by other countries and manufactured abroad with the generic designation simply as the "Browning High Power". 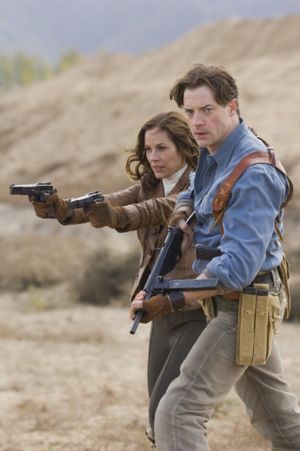 Alex O'Connell (Luke Ford) and Roger Wilson (David Calder) point their Hi-Powers at a mummy they thought was alive.

"What? Did you rob an armory on your way here?"
Note the Hi-Power shown has an external extractor which is anachronistic as it wasn't introduced until 1963. 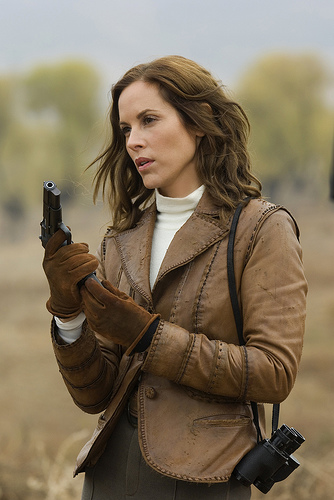 Promotional image of Evelyn O'Connell (Maria Bello) with a Hi-Power.

Rick O'Connell (Brendan Fraser) carries Colt M1911 pistols and uses them on a few occasions, specifically in the Himalayas gunfight and fire at the Emperor's Terracotta warriors during the undead battle near the end of the film. M1911 pistols can be seen in the hands of various other characters throughout the film.

Rick takes cover behind the wall and fires his Colt M1911.

General Yang (Anthony Wong Chau-Sang) uses a Norinco Type 54 pistol as his main weapon throughout the film. This is an anachronism because the Chinese didn't start manufacturing the Type 54 until the 1950s as the film is set in 1946. It is quite possible that the Type 54 pistol was standing in for the Russian-made Tokarev TT-33 pistol. 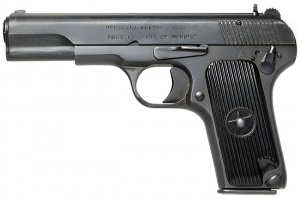 General Yang with his Norinco Type 54.

Rick carries a pair of Smith & Wesson Military & Police revolvers in the Shanghai Museum and brandishes them when the Emperor is awakened, firing multiple shots at him and then using them briefly on the streets of Shanghai before losing them. 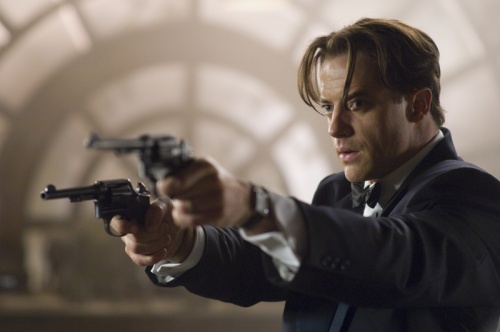 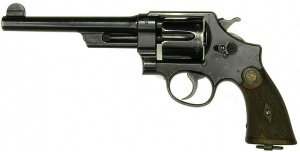 Alex briefly pulls the Walther P38 from his weapons box and shows the gun to Rick as the father and son compare weapon choices.

Alex takes out the Walther P38.

The Webley Mk VI revolver can be seen briefly in the hand of Jonathan Carnahan (John Hannah) in the Himalayas gunfight but he never fires it.

The Webley Mk VI can be seen in the background as the top gun in the box.

Alex O'Connell (Luke Ford) arms himself with the PPS-43 submachine gun during the gunfight with General Yang's soldiers in the Himalayas. Alex referred to it as a "personal assault weapon". 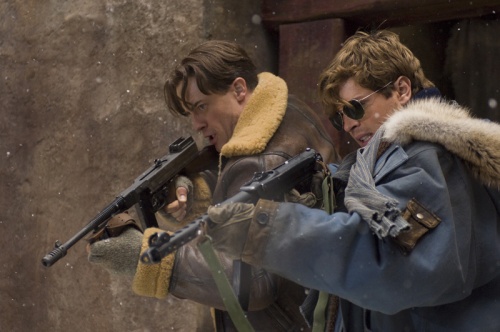 Alex (Luke Ford) hands a PPSh-41 to Rick (Brendan Fraser) near the end of the undead battle shortly before they go after the Emperor (Jet Li). Alex can also be seen firing it from the back of the motorcycle at General Yang's soldiers while Rick drives.

Yang's men wait for orders, one PPSh-41 is seen. 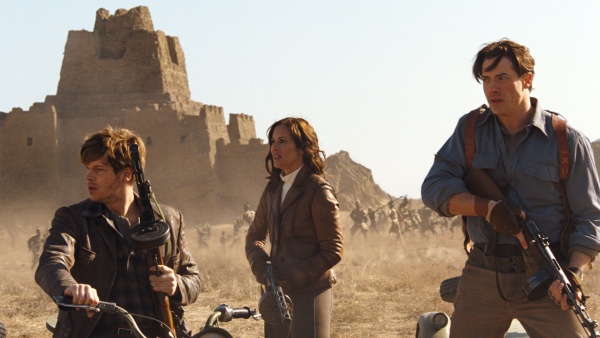 Alex, Rick and Evelyn hold PPSh-41s in the production image. 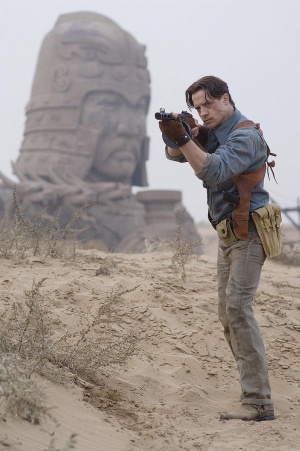 Rick with his captured PPSh-41 in the production image.

The 9mm Sten Mk II submachine gun is used by Rick during the undead battle near the end of the film. 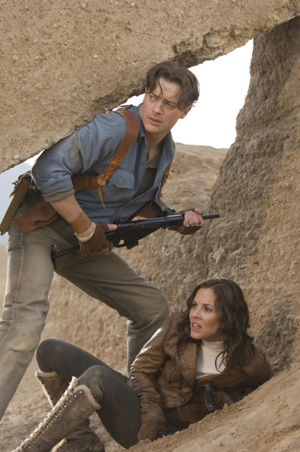 Rick armed with the Sten alongside Evelyn.

"Welcome to the 20th Century!"
Note how Rick is holding a Sten by the heat-shield which is the proper way instead of holding it by the magazine seen in most films and games.

Rick (Brendan Fraser) can be seen using the M1928 Thompson during the gunfight with General Yang's soldiers in the Himalayas. The script has him say that the box magazines have 25 rounds, despite there are only 20 and 30 round box magazines. Alex tells his father that Thompson can jam on him with the 50-round drum magazine. As the Thompson is later seen with a 30-round box magazine, it can be assumed that the weapon was reloaded at some point (but it appears that it spent the 50-round drum too fast).

"Let's give them a warm O'Connell Welcome!"
Rick (Brendan Fraser) with his M1928 Thompson.

In what appears to be a continuity error, the drum magazine changes into a 30-round box magazine very briefly after Yang's men hit the temple with bazookas (Rick was never seen reloading his weapon). 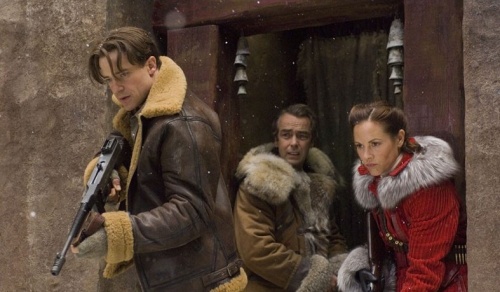 Production image of Rick O'Connell (Brendan Fraser) armed with an M1928 Thompson alongside his wife and brother-in-law.

Rick (Brendan Fraser) with his M1928 Thompson (now with the box magazine).

On the left, Rick (Brendan Fraser) with his M1928 Thompson (now with the box magazine).

Rick with his M1928 Thompson. Note the 30-round box magazine is now loaded.

A Chinese soldier with his Arisaka Type 99.

The Remington Model 8, fitted with a scope and silencer in disassembled condition, can be seen in the weapon box of Alex O'Connell.

A Chinese soldier fires his SKS.

Evelyn (Maria Bello) uses this .30-30 lever-action rifle as her weapon of choice to fend off General Yang's soldiers in the Himalayas gunfight. 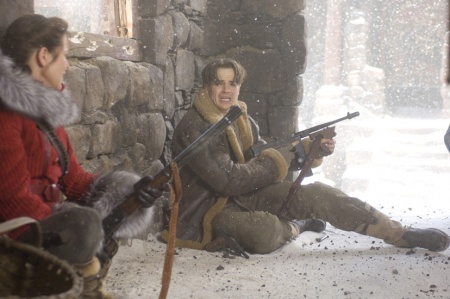 The Winchester Model 1894 can be seen in the hands of Evelyn (Maria Bello) in the foreground of the production image.

The Winchester Model 1894 can be seen as the middle gun in the box.

These bolt-action rifles also known as the "Chiang Kai-shek Rifle" and "Type 24" are carried and used by General Yang's soldiers throughout the film. The Type Zhongzheng rifle is a licensed, Chinese copy of the Mauser Standard Model rifle, the forerunner to the Mauser Karabiner 98k rifle, and was extensively used by both Nationalist and Communist forces during the Chinese Civil War in the 1940s.

Rick can be seen using the sawed-off pistol-gripped Winchester Model 1912 after taking it from the dead body of one of General Yang's soldiers in the Himalayas gunfight. Rick uses the shotgun to shoot a few of the soldiers and to fire at the Emperor to no avail.

Rick (Brendan Fraser) armed with a Winchester Model 1912 with a sawed-off stock and barrel.

The Winchester Model 1897 shotgun can be seen in the weapon box of Rick O'Connell but he never fires it. Rick had used this shotgun in The Mummy.

The Winchester Model 1897 can be seen as the left gun in the box.

The Winchester Model 1887 shotgun can be seen in the weapon box of Rick O'Connell but he never fires it. This is presumably the same one he used in The Mummy Returns.

The Winchester Model 1887 can be seen as the right gun in the box.

Two Sawed-Off Double Barreled Shotguns can be seen in the weapon box of Rick O'Connell. Rick had carried a similar shotgun in The Mummy Returns.

Two Sawed-Off Double Barreled Shotguns can be seen on the bottom of weapon box.

The Browning M1919A4 can be seen in the back of General Yang's jeep and is fired by his lieutenant, Choi (Jessey Meng), at Rick and Alex as they escape on a motorcycle.

General Yang's men can be seen firing M9 Bazookas in the Himalayas gunfight.

Yang's men with their bazookas.

Yang's men with their bazookas before exploding after taking hits from Rick's and Alex's submachine guns.

Rick O'Connell (Brendan Fraser) can be seen throwing at least one Mk 2 hand grenade at Terracotta warriors during the undead battle. Mk 2 grenades are also used by Alex (Luke Ford) and possibly some of General Yang's soldiers.

Both Rick and Alex have a box with weapons. In all it consists of:

"What? Did you rob an armory on your way here?"

Two Walther P38s next to an FN Hi-Power above a row of Mk 2 hand grenades.

Rick stands next to his box.
Retrieved from "https://www.imfdb.org/index.php?title=Mummy:_Tomb_of_the_Dragon_Emperor,_The&oldid=1411839"
Categories: