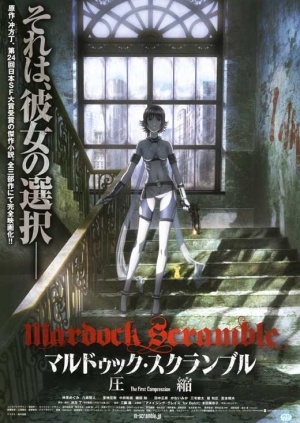 Mardock Scramble: The First Compression is the first film in the Mardock Scramble trilogy from GoHands Studio. The film series is a remake of Mardock Scramble, 2005 OVA series from Gonzo Studios that was canceled before production could begin and was shelved indefinitely. The film was released in Japanese theaters on November 6, 2010. The entire trilogy was licensed by Sentai Filmworks, and an English version of The First Compression was released by Sentai Filmworks on September 3, 2011.

The following guns were used in the anime film Mardock Scramble: The First Compression:

One of the assassins during the mall chase fires at Rune's car with a Franchi SPAS-12. 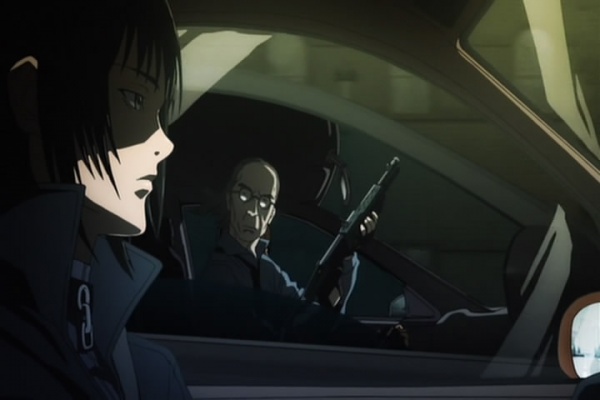 The assassin rolls down his window, revealing his SPAS-12. 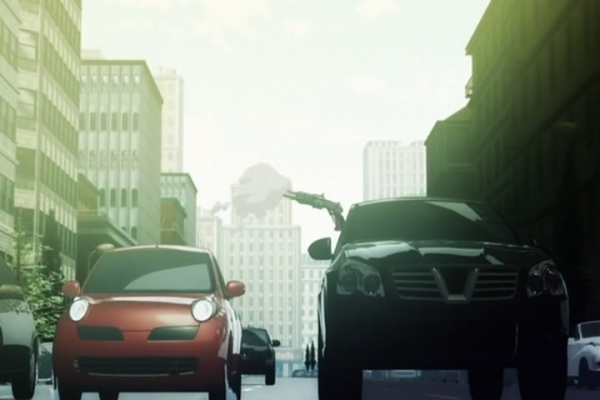 The assassin fires the SPAS-12 at Rune's car. 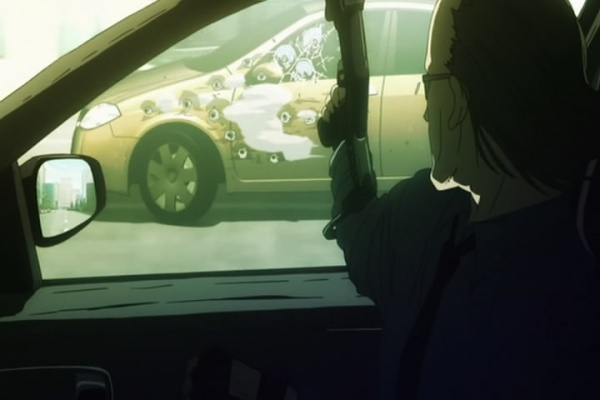 Note how the gunman has the SPAS-12's butt hook wrapped around his arm, allowing him to fire the weapon one-handed.

Medium the Fingernail's weapon of choice is a generic Colt M1911 variant. 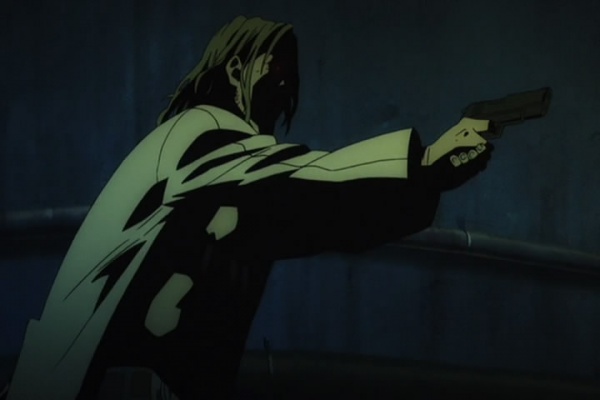 Medium aims his 1911 at what he thinks is Rune. 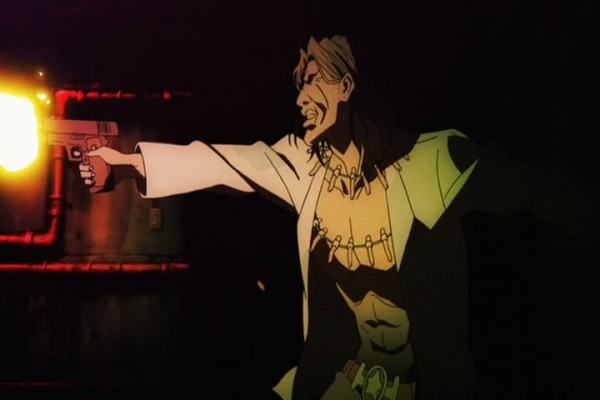 Mincemeat the Wink uses a submachine gun disguised as a briefcase. While the weapon itself is fictional, the concept of a briefcase gun has some basis in reality, as a similar system exists for the H&K MP5K. 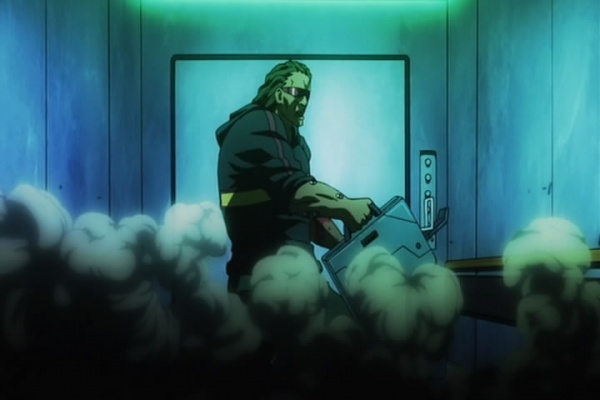 Mincemeat fires his briefcase gun blindly at the elevator walls. 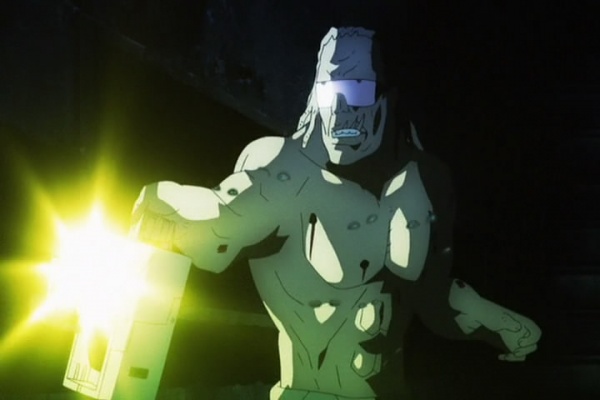 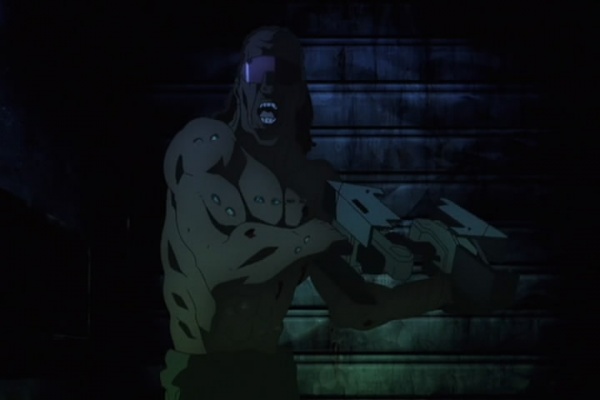 Mincemeat triggers a release mechanism on his weapon, causing the briefcase shell to break away from the gun. 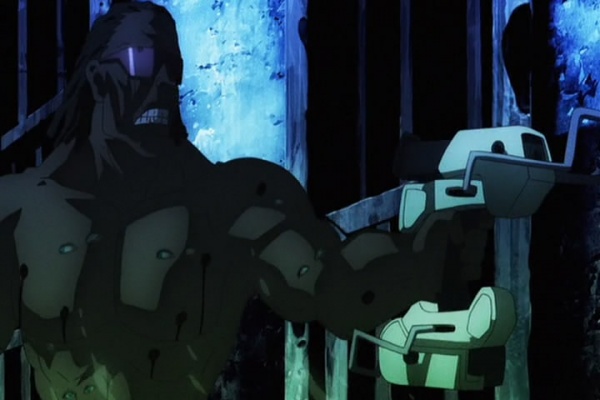 Welldone the Pussyhand's weapon of choice is a pair of antique Nambu Type 14 pistols. 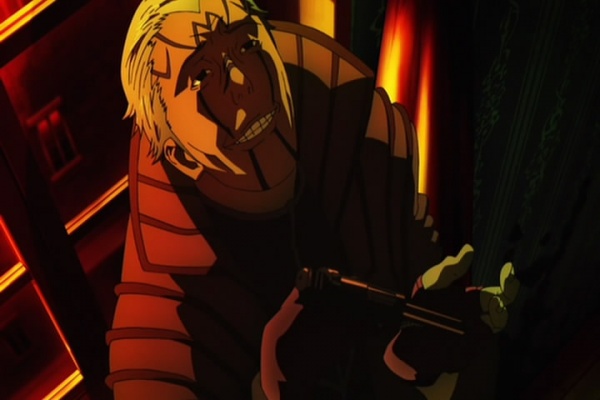 Welldone cradles one of his Nambu's. 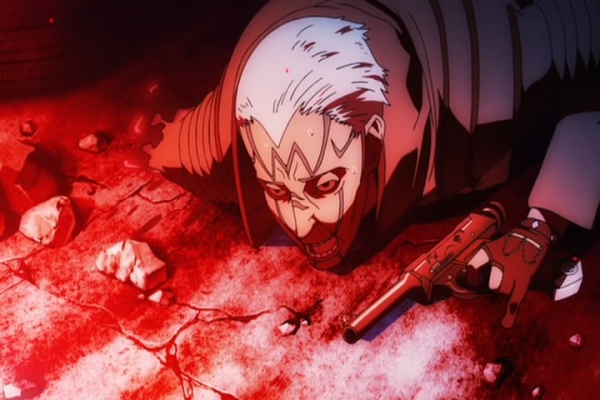 Welldone with his Nambu 14 after his unsuccessful fight against Rune.

Shell Septinos is seen using a fictional revolver near the end of the film. Despite his large stature, this weapon still appears massive in his hands, attesting to it's size. While it's caliber is never stated, a single round is depicted as being capable of completely eviscerating a human. 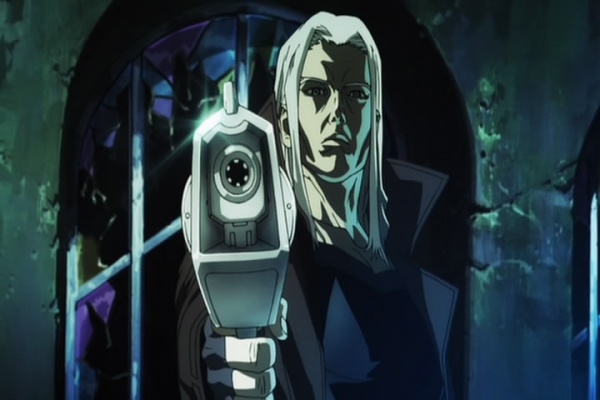 Shell aims his revolver at Rune. 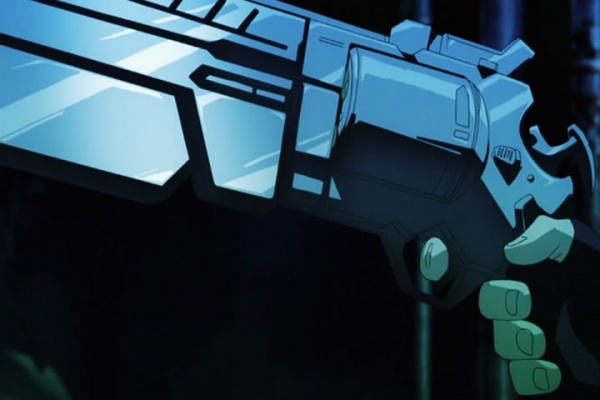 A closeup of the frame of Shell's revolver. Note the Smith & Wesson style cylinder latch. 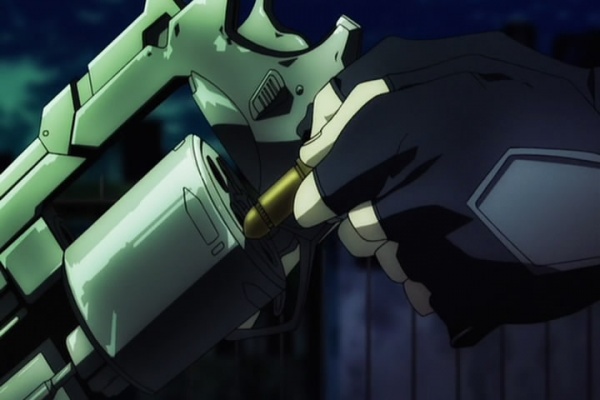 Shell reloads his weapon. The round appears to be almost as wide as his thumb!

Rune's brother is seen using a Smith & Wesson Model 60 during flashbacks to their childhood. 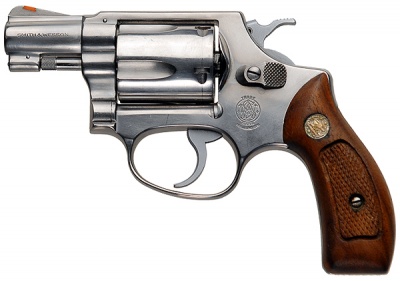 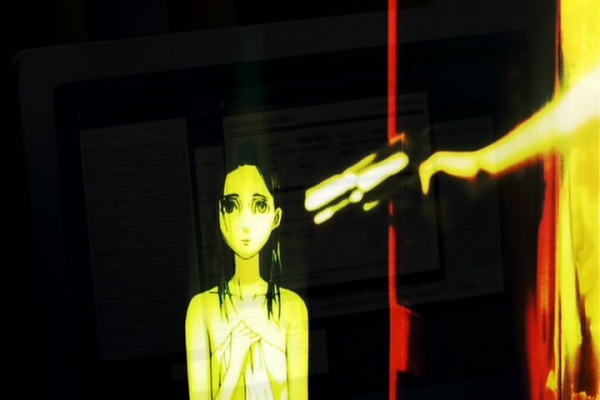 The Model 60 in Rune's flashback. 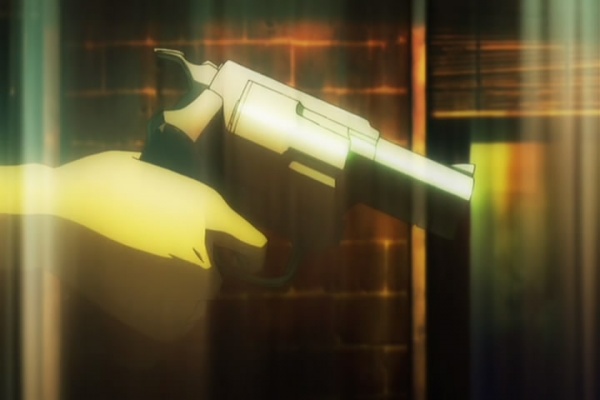 The Model 60 as shown in Rune's flashback.

Rune's most effective weapon is Œufcoque, an AI capable of shape-shifting it's physical form into various devices and weapons as the situation requires.

When Rune first meets Œufcoque, he transforms into what Dr. Easter describes as "the physical form of [her] heart's desire"; namely, a (fictional futuristic) revolver. 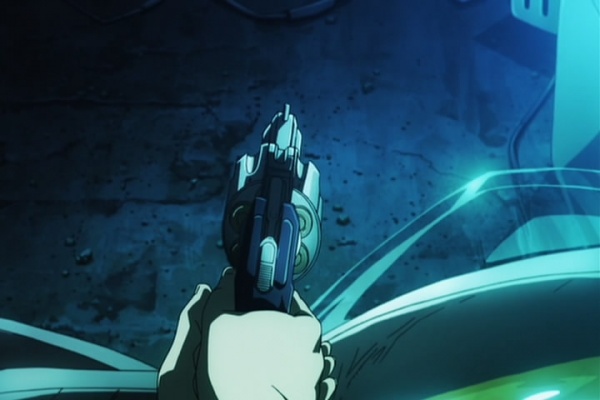 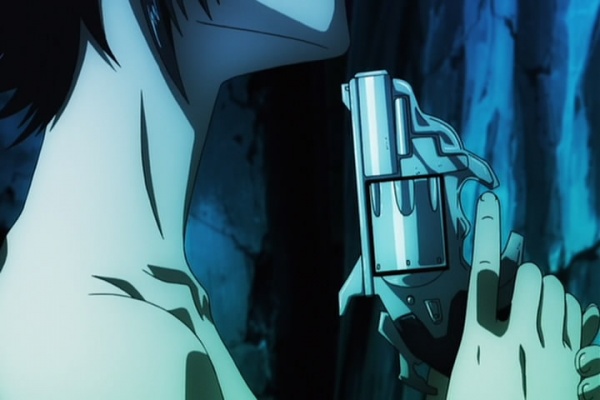 Near the end of the film, Œufcoque morphs into a pair of large, futuristic handguns for Rune to use. 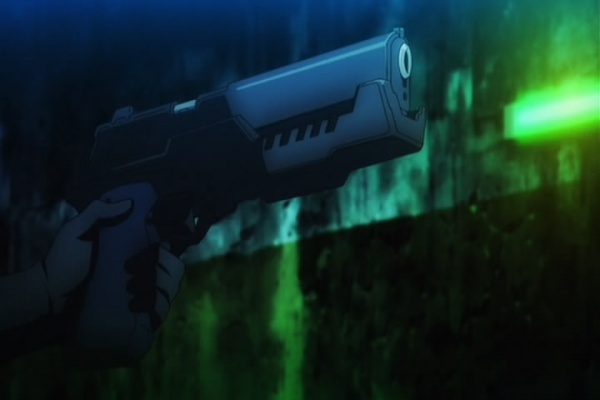 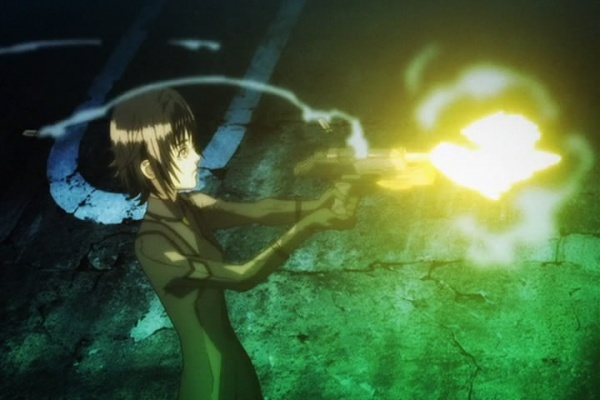 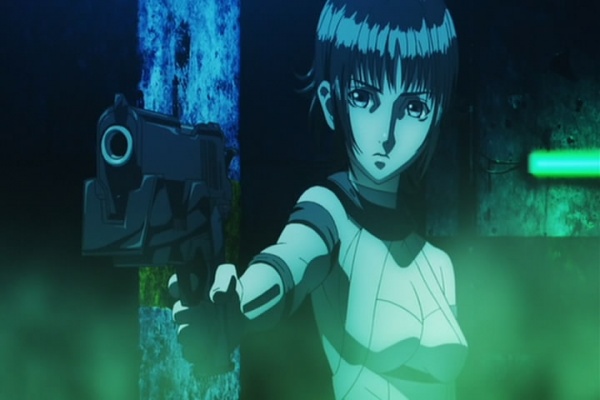