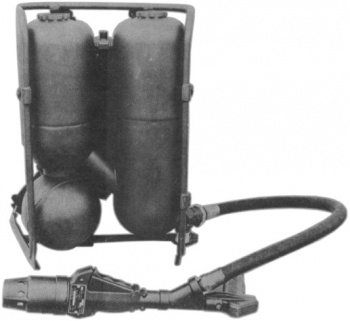 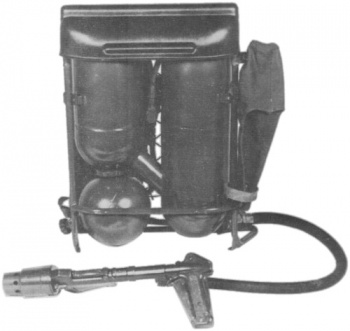 The M9 Flamethrower was developed by the United States of America during the Vietnam War as a replacement for the M2 series of flamethrowers. The M9-7 was lighter than its predecessor whilst being more robust and easier to carry whilst retaining the same capacity and range. The M9-7 introduced a new wand referred to as the M7 (hence the "-7" portion of the designation), which was also fitted to a number of older M2A1 tanks (creating the M2A1-7) to supplement flamethrower numbers. The M7 wand was shorter and more manageable than the previous models, lacking the front pistol grip with the igniter switch instead being mounted on the right of the firing tube with a grip safety on the opposite side. A subsequent M9A1-7 model was developed, with the main differences being plastic cover over the filler caps, a fabric holster for the wand on the right side of the tanks, a slightly different frame incorporating a pair of back pads, and a gas reservoir rated to a higher pressure. M9 and M9A1 tanks can still be found today however the vast majority of the M7 wands were destroyed after the war so it is more common to find these tanks fitted with older M2 wands that were used on the previous M2-2 and M2A1-2 flamethrowers used in WWII and Korea respectively. As with the previous M2 series, the M9 flamethrower can fire either standard gasoline or oil, or a gel that is produced by mixing fuel with M4 Thickening Compound with the gel having a greater range and effect on target.

The United States chose to withdraw all flamethrowers from service in 1978: contrary to popular belief, this was a unilateral decision not enforced by any international law, and had more to do with their questionable effectiveness in modern combat. The role of the flamethrower in combat was taken over by the longer-ranged M202 FLASH incendiary rocket launcher.

The M9 Flamethrower and variants can be seen in the following films, television series, video games, and anime used by the following actors: