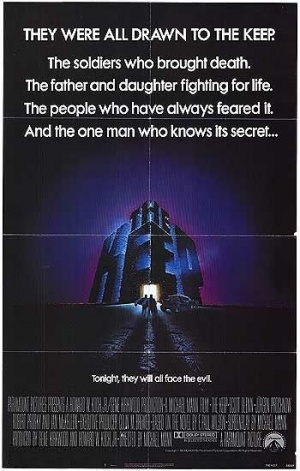 The Keep is a 1983 horror film that was the second feature directed by Michael Mann (his first being the 1981 James Caan thriller Thief). Only later would Mann become well known to the American public through his hit television series Miami Vice which ran from 1984-1990. During the 1980s, Mann became famous for his fondness for catchy pop music and synth scores as well as hip and flashy (for the time) cinematography. His fondness for unconventional cinematography shows its inception in this film and would later explode into the neon colors of Miami Vice and his third feature film Manhunter. The Keep has gained something of a cult film status and many consider it a camp classic. One of the details which drew attention from film buffs was its accurate (for the time) portrayal of the weapons and equipment of the SS and Heer units in 1940. Despite the glaring error that the SS Allgemeine (the only SS division authorized to wear the iconic Black uniform with party armband) never operated outside the borders of Germany (this film takes place in the Carpathian Mountains in Romania), the uniforms, backpacks, equipment and gear of the SS and the Heer Soldiers showed a surprising attention to detail. Most World War II films up to that time had little accuracy when costuming any German forces.

The following weapons were used in the film The Keep:

Captain Klaus Woermann (Jürgen Prochnow) carries an MP38 as well as a few of his men.

Woermann (Jürgen Prochnow) reflexively aims his MP38 at the Keep's caretakers when they startle him.

Private Lutz (John Vine) with his MP38 while on sentry duty.

An SS adjutant (Wolf Kahler) and the other Einsatzkommando with their Haenel-Schmeisser MP28/II submachine guns.

An Einsatzkommando (Benedick Blythe) opens fire with his MP28/II.

Closeup of a smoking MP28/II barrel.

SS Major Erich Kaempffer (Gabriel Byrne) carries what looks like a Walther PPK as his sidearm. 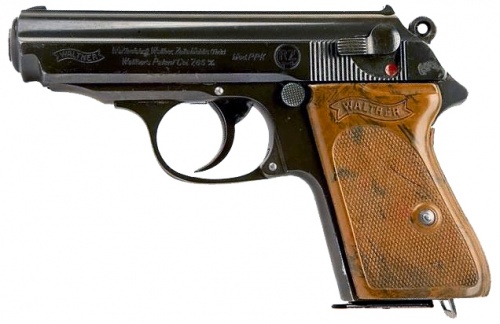 The Wehrmacht soldiers use Karabiner 98k rifles. Although the Einsatzkommando mostly use submachine guns, a few are seen with Karabiners. They're also seen used by the Romanian border guard soldiers at the border. The border guard's are fitted with bayonets.

The other border guard's (Bruce Payne) Karabiner 98k is seen as he and his companion are terrified of Glaeken's (Scott Glenn) glowing eyes.

The Einsatzkommando in the foreground holds a Karabiner 98k as the SS arrest Glaeken (Scott Glenn), as does the one at the far right in back (an uncredited Doug Robinson).

A Wehrmacht soldier (Sean Barker) with his Karabiner 98k inside the keep just before Molasar attacks.

The MG34 is used by German sentries at the entrance to the Keep. One is also seen mounted on the turret of Kaempffer's (Gabriel Byrne) armored car.

A sentry (Peter Guinness) next to his MG34 outside the Keep.