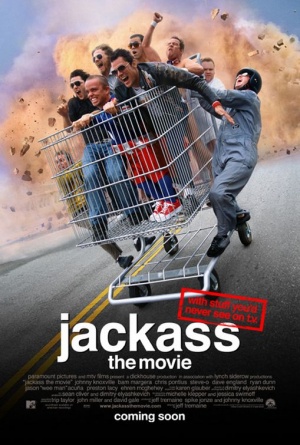 Jackass: The Movie is the aptly named film stemming from the MTV series Jackass, wherein the stars conducted lewd and outrageous stunts and pranks. The film stars Johnny Knoxville, who has starred in several other films such as the 2004 remake of Walking Tall and 2013's The Last Stand. Spike Jonze (Three Kings) was one of the film's producers and also even appears in some of the film's skits. The original TV series and first film would spawn a major Jackass franchise, consisting of the feature film sequels Jackass Number Two (2006) (with its bonus film, Jackass 2.5) and Jackass 3D (2010) (with its bonus film Jackass 3.5), as well as 2013's Jackass Presents: Bad Grandpa. In addition, there would be several spin-off TV series on MTV starring and/or otherwise involving many of the main members of Jackass, including Wildboyz, Viva La Bam and Nitro Circus.

The following weapons were used in the film Jackass: The Movie:

During the skit entitled "Riot Control Test", Johnny Knoxville is shot with what appears best to be a customized Mossberg 500 'Persuader' shotgun with ghost-ring sights and a Laser Devices dual-ring mount with a laser-sight on the right side. The Mossberg is fired by George Hruska (Then the Vice President of Operations of ALS Technologies, a less-lethal ammunition manufacturer). The skit is to demonstrate an ALS-manufactured projectile called the 'Pen-Prevent', a 40-gram tail-stabilized bean-bag contained, obviously, within a 12-Gauge shotgun shell. This is the only weapon seen in the film but is closely seen and is paramount to the particular scene. Of note is that this skit was filmed with actual motion-picture cameras with monitors, giving a fairly good picture quality with which to view the weapon (as opposed to the cruder cameras used on the earlier MTV show, which were even used again in parts of the film when the higher-quality cameras weren't available). 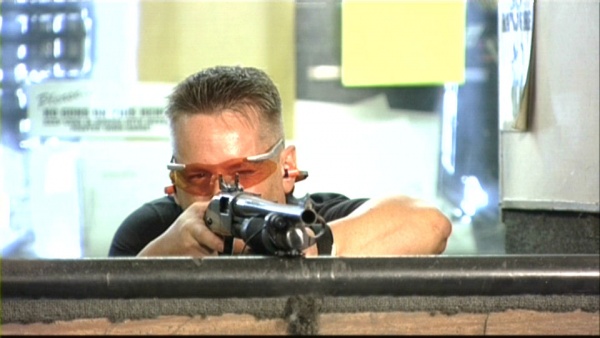 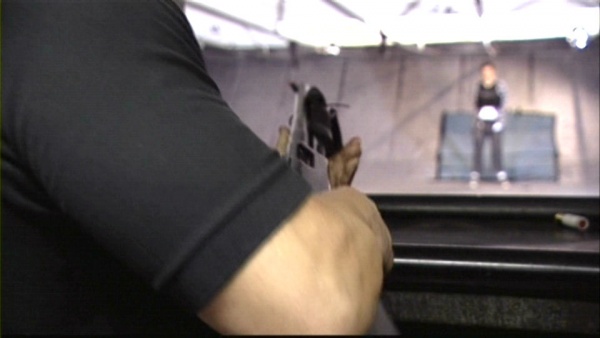 Hruska flicks the safety off the Mossberg as Johnny Knoxville stands downrange in the background. 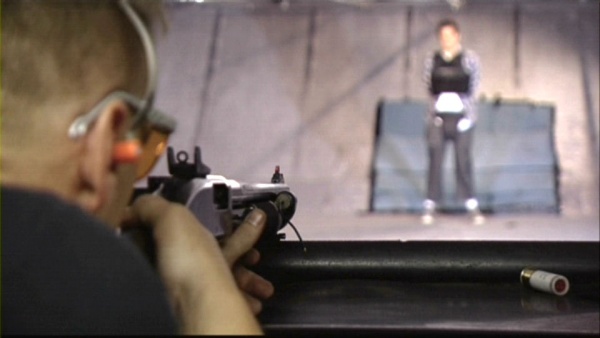 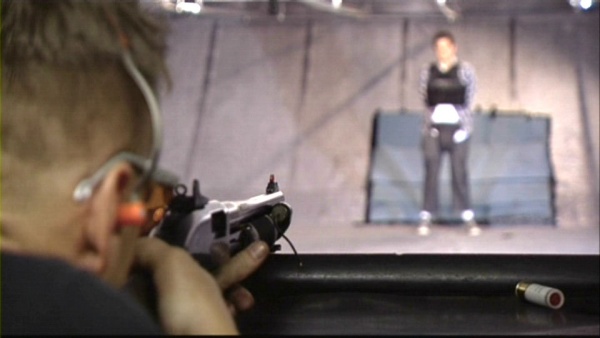 Hruska takes aim at Knoxville. One of the 'Pen-Prevent' rounds lays to the right. 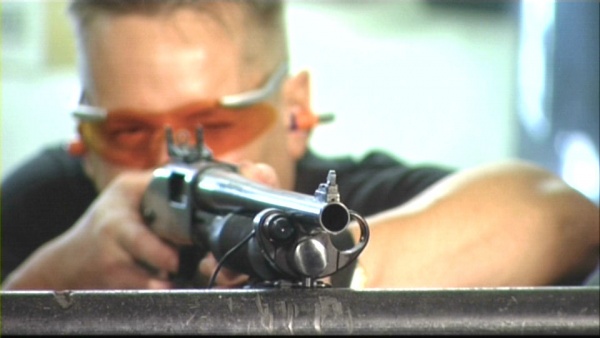 Closeup of the Mossberg as Hruska prepares to fire at Knoxville. Note the dual-ring mount in this shot.

Additional Images can be viewed in the Discussion page.