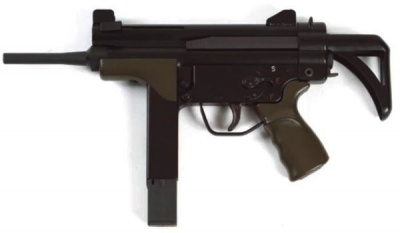 INDEP Lusa is a Portuguese submachine gun. It was designed in early 1980s, using some elements (including trigger group) of Heckler & Koch MP5 that was manufactured by INDEP under license. Lusa appeared in 1983 but never entered service in Portuguese military or police. In 2004 all rights on Lusa were sold to LUSA USA company which manufactured semi-auto versions Lusa 94 ABW, Lusa 94 PDB, Lusa 94 SA and "pistol" version Lusa SP89 for the civilian market and offered conversion kits in .22 LR and .40 S&W calibers.

The INDEP Lusa and variants can be seen in the following films, television series, video games, and anime used by the following actors: