The IMI Negev is an Israeli light machine gun developed by Israel Military Industries, now known as Israel Weapon Industries. It is striker-fired, gas operated, and fires from an open bolt. The Negev is designed to be a rugged and reliable machine gun that can operate in dusty, dirty, and generally adverse conditions. It is fed by either linked belts or by 35-round Galil magazines. The weapon also features an adjustable gas regulator that allows the operator to adjust the amount of gas entering the action, which is useful when using different types of ammunition or when operating in dirty conditions.

First manufactured in 1995 and adopted by the Israeli Defense Forces in 1997, the Negev has been widely exported. Users besides Israel include Georgia, Brazil, Vietnam, Mexico, the Philippines, and Ukraine, where it is locally produced as the Fort-401.

The IMI Negev and variants can be seen in the following films, television series, video games, and anime used by the following actors: 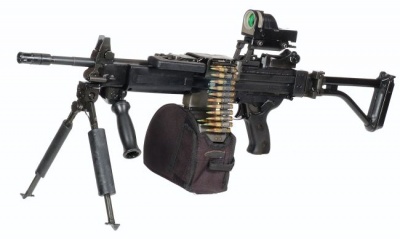 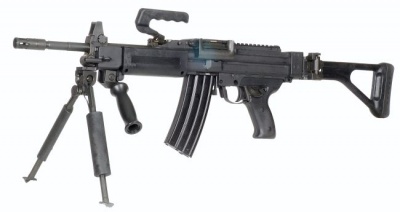