The Great Gatsby is the 2013 Australian/American adaptation of F. Scott Fitzgerald's 1925 novel of the same name. Directed by Baz Luhrmann, the film stars Leonardo DiCaprio as the title character, with Carey Mulligan, Joel Edgerton, Tobey Maguire, Elizabeth Debicki, Isla Fisher, and Jason Clarke. Like Luhrmann's previous films, contemporary pop and hip-hop were added to soundtrack, which would normally be out of place for a film set in 1922. Filming was done in Australia, with funding from the Australian government.

This is the fourth feature film adaptation of the novel, following a 1974 feature starring Robert Redford and a 2000 TV movie starring Toby Stephens.

Gatsby with his M1911. All the other WWI footage appears to be colorized stock footage.

George Wilson (Jason Clarke) uses a Webley Mk IV revolver at the end of the film. This is an anachronism, as the Webley Mk IV wasn't introduced until a year after the film is set. 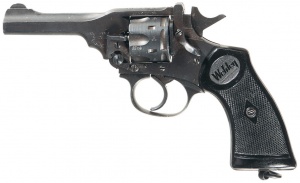 George Wilson unveils his Webley. Note the Webley script on the grip panel.

The silhouette of Wilson's revolver is clearly that of a different revolver, however, possibly some sort of a Smith & Wesson.

That is not the shadow of the above Webley. The barrel appears to be much longer, and there appears to be an ejector rod under the barrel.

In the flashback soldiers go over the top with Springfield M1903 Mk 1 rifles. This scenes are taken from the movie Sergeant York.