Diamonds Are Forever is the 7th installment in the official James Bond film series and saw the return of Sean Connery to the role of Agent 007 following George Lazenby's only appearance in On Her Majesty's Secret Service. The 1971 sequel finds Bond investigating a diamond smuggling ring that leads him to an eccentric Las Vegas businessman as well as an old nemesis. Directed by Goldfinger's Guy Hamilton, Diamonds Are Forever was Connery's final time as Bond in the official EON series, but he would eventually return as the secret agent in the rival 1983 Bond film Never Say Never Again.

The following weapons were used in the film Diamonds Are Forever:

James Bond (Sean Connery) carries his Walther PPK with brown grips, even though he never fires it in the film. 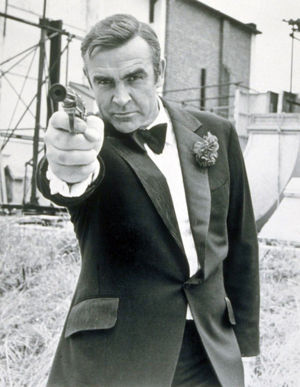 The decoy Blofeld in the pre-credits mud bath aims a Smith & Wesson Model 10 on Bond before he is disarmed.

The decoy Blofeld aims his Model 10, covered in "mud" (actually a substance consisting of mashed potatoes).

The helicopter pilot meeting Mr. Wint and Mr. Kidd in the African desert carries a Colt Detective Special, as do the mobsters working for Blofeld and Slumber. Some of Felix Leiter's CIA agents also have Detective Specials, including Leiter (Norman Burton) himself.

The pilot points his Colt DS at Wint and Kidd.

A mobster (Marc Lawrence) holds his Detective Special on Bond.

The mobster (Sid Haig) who told Bond he too had a brother points a Detective Special.

A CIA agent shoots the lock of Willard Whyte's door.

The real Peter Franks (Joe Robinson) pulls out a Smith & Wesson Bodyguard during the elevator fight with Bond. Ernst Stavro Blofeld (Charles Gray) also draws one on Bond when he is confronted in Willard Whyte's penthouse.

Peter Franks pulls out his Bodyguard.

Blofeld aims his Bodyguard at Bond.

Blofeld walks through the penthouse with his revolver.

The Las Vegas sheriff (Roy Hollis) carries a Smith & Wesson Model 10 HB revolver when chasing Bond around the downtown part of the city.

The sheriff raises his revolver.

Las Vegas policemen carry M1911A1s in their holsters. One of Leiter's CIA agents also carries a 1911.

One of Leiter's CIA agents carries a Star Model B when going to Willard Whyte's residence.

Blued Star Model B - 9mm pistol from the movie The Untouchables (1987). This one is a screen used and fired handgun in the movie and was used by Kevin Costner on screen.

The agent on the far left has a Star Model B, identified by its external extractor.

A Sterling Arms Model 302 pistol is seen in the credits with Sean Connery's name. 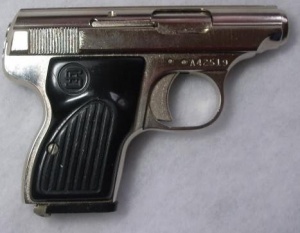 The Sterling Arms pistol next to Connery's name.

Leiter and one of his Thompson-wielding men watch Bond "giving breaststroke lessons".

A CIA agent secures a door with his Thompson.

Blofeld's guards carry Madsen M50s at the Baja facility in the finale. Tiffany Case (Jill St. John) picks one up, only to fire it haphazardly and fall into the water with it.

A henchman helps Bond out of the "wave walker" with the Madsen M50 slung over his back.

One of Blofeld's men points his Madsen at Bond.

A guard with a M50 in the background. This is the most ugly uniform ever seen in a Bond film.

A thug leaves Blofeld's office with his M50.

A henchman locks Bond away while holding his Madsen.

Henchmen with M50s run through the oil rig.

One of Blofeld's men arrests Tiffany with his gun in one hand.

One of Blofeld's men shoots down a helicopter with a Madsen M50.

Tiffany falls off the rig while firing a discarded M50.

Blofeld's henchman in the pre-credits sequence aims an M16 rifle at Bond. A USAF airman guarding a missile base also carries the rifle.

A US Air Force guard can be seen holding his M16.

Bert Saxby (Bruce Cabot) uses a scoped Mauser Sporter with a scope when attempting to kill Willard Whyte outside his home. You can see the bolt release knob when he holds the rifle up after being shot. Also note the "slot" on the left side just in front of the bolt release knob. A tell tale sign that Saxby is using a "sporterized" Mauser 98 or a new Mauser 98 Supreme as made by FN at the time.

Saxby looks up after his missed shot.

Saxby is killed while holding his rifle.

Chinese soldiers appear to be armed with what appears to a stunt version of the Mauser Kar98k when Blofeld's satellite takes out the missile base. The rifle is seen carried by the soldier guarding a row of missiles who was set on fire by the heat of the laser beam and another at the gate of the missile base.

The rifle is seen carried by the soldier guarding a row of missiles who was set on fire by the heat of a laser beam.

Some of the US Marines fire Browning M1919 machine guns, fitted with a strange muzzle device, from their helicopters.

A gunner readies the Browning M1919 machine gun, fitted with a strange muzzle device, from their helicopters.

An Oerlikon 20mm Cannon is used by SPECTRE operatives during the oil rig assault.

The SPECTRE-soldiers fire at Navy helicopters.

A closer view of the Oerlikon.

While atop the Whyte House hotel, Bond uses what appears to be a Harrington & Richardson Mark VI Flare Gun. 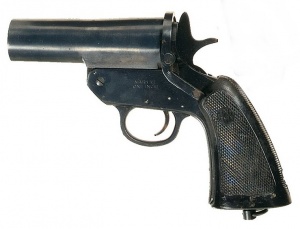 While atop the Whyte House hotel, Bond uses what appears to be a Harrington & Richardson Mark VI Flare Gun to launch the piton.

Bond ready to use the Harrington & Richardson Mark VI Flare Gun to fire another piton.