The Crown is the Netflix original series that examines the reign of the United Kingdom's current monarch, Queen Elizabeth II (portrayed for the series' first two seasons by Claire Foy). The first two seasons of the series primarily covered events from 1947 through 1964. Both of these seasons use flashbacks to touch on events prior to their main narratives, especially to World War II, the abdication crisis, and the youths of the Queen and her consort, Prince Philip (Matt Smith). The series' third season covers events from 1964 to 1977, with Olivia Colman taking over the role of Elizabeth and Tobias Menzies of Prince Phillip.

The following weapons were used in the television series The Crown:

The Rifle, Short, Magazine, Lee-Enfield Mk.III, or SMLE (or Rifle No.1 Mk.III under revised nomenclature) was the main battle rifle of British and Commonwealth forces in World War I. It continued to serve alongside the Lee-Enfield No.4 through World War II and until the adoption of the L1A1 self-loading rifle. It is often seen in the background or at a distance, and it is also prominently wielded by Elizabeth and Phillip's guide in Kenya.

The Lee-Enfield No.1 Mk. III* rifle. This is the most common variant of the No.1 Mk.III. 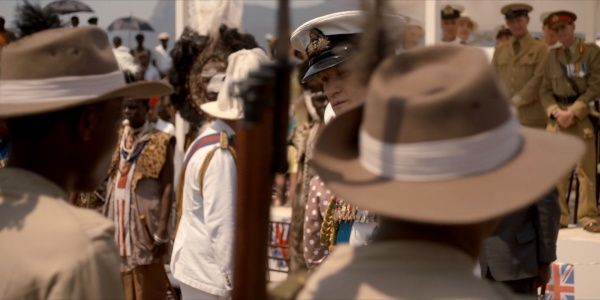 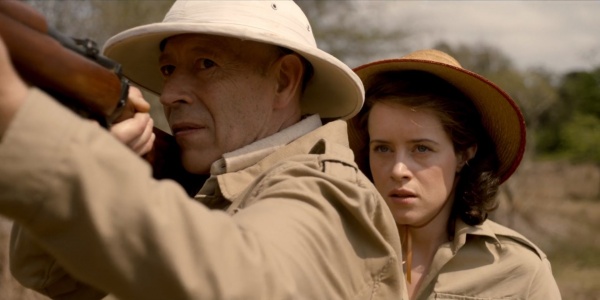 Elizabeth and Philip's guide with his No.1 rifle in "Hyde Park Corner" (S1E02). 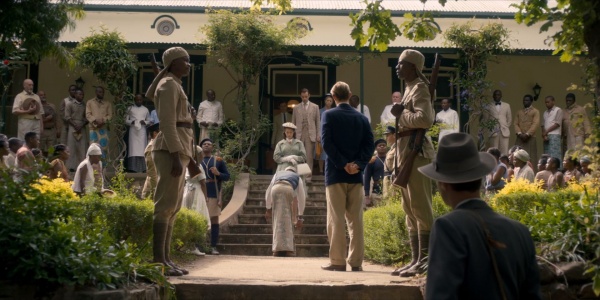 Kenyan troops standing guard with their No.1 rifles in "Hyde Park Corner" (S1E02). 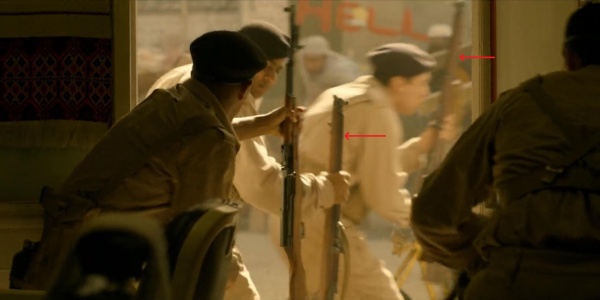 Egyptian troops with No.1 rifles (indicated by red arrows) in "Misadventure" (S2E01).

Philip, Duke of Edinburgh wields a double-barreled rifle in Kenya. This firearm is not a shotgun, as he can be heard ordering one of the party to "pass me my rifle." Though less commonly seen than double-barreled shotguns, double-barreled rifles were, and still are, popular for protection against dangerous African game. They can be chambered for very powerful cartridges and offer a very quick and reliable followup shot. Since British gun makers will make the rifles to the customer's specifications the fact that the rifle seen is a "hammered" model means nothing. Hammered guns (in contrast to hammerless models) are still manufactured and are chambered for the heaviest of calibers.

Philip with his double-barreled rifle in "Hyde Park Corner" (S1E02).

The Lee-Enfield No.4 Mk.I was the main battle rifle of the United Kingdom and Canada during World War II, with the rest of the Commonwealth continuing to use the older No. 1 rifle. Like the No.1, it is often seen in the background or at a distance. It can be distinguished from the No.1 by differences in the muzzle and rear sight.

The Lee-Enfield No.4 Mk.I rifle. 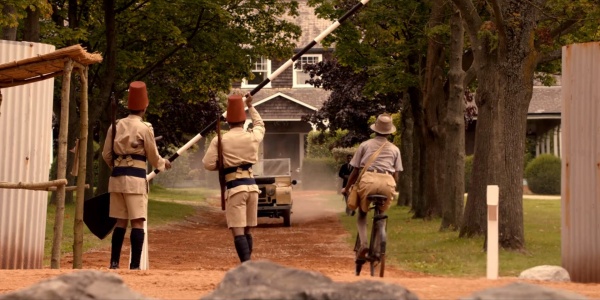 Rhodesian troops with their No.4 rifles in "Gelignite" (S1E06).

Ghanaian troops with their No.4 rifles in "Dear Mrs. Kennedy" (S2E08).

At least one Egyptian soldier is armed with a Chinese Type 56 rifle. It can be distinguished by the underfolding bayonet. It is probably meant to stand in for the Soviet AK-47: the Egyptians were being supplied with Soviet and Czech weapons, and the Type 56 was very new (and not exported in large quantities, if at all) at the time of this episode. However, the Egyptian army was armed with a variety of bolt action rifles and Soviet SKSs during this conflict. An AK-47 or Type 56, while not anachronistic, is improbable. 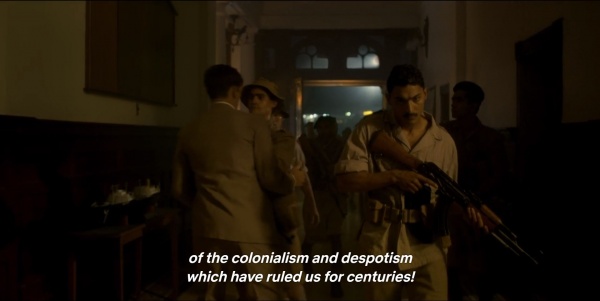 Egyptian soldier with a Type 56 rifle in "Misadventure" (S2E01).

At least one Egyptian soldier is armed with an AKS-47 type rifle, i.e., an AK-47 with an underfolding sheet-metal stock. See above for discussion of the AK-47 in as depicted in this conflict.

The Chinese take on the AKS-47, the Type 56-1. The screen-used rifle is not seen clearly enough for definitive identification, but this version is popular among film and television armorers. 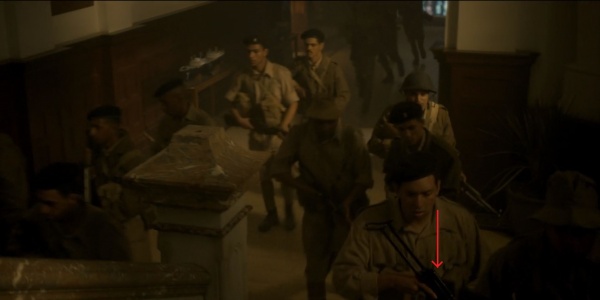 Egyptian soldier with an AKS-47 (indicated by red arrow) in "Misadventure" (S2E01).

Many Egyptian soldiers and irregulars wield SKSs. The SKS was designed for the Soviet army, but was obsolete upon introduction and quickly supplanted in Soviet service by the AK-47. Instead, the Soviet Union exported it to many other nations, including Egypt. Several other nations manufactured variations of the SKS. Based on the on-screen rifles' lack of a very distinctive muzzle device, we can rule out Yugoslavian variants, which would be anachronistic. They are not seen clearly enough for more a definitive identification, however. 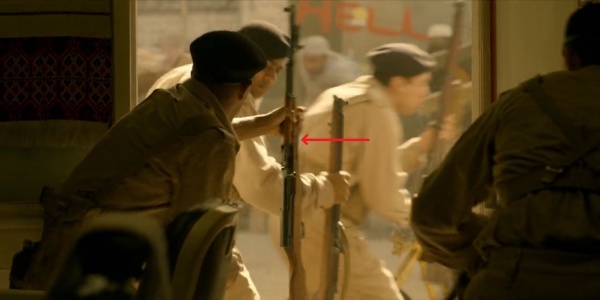 Egyptian soldier with an SKS (indicated by red arrow) in "Misadventure" (S2E01).

Tommy Lascelles with his sporting rifle in "Lisbon" (S2E03).

Queen Elizabeth hunts with a Parker-Hale M81. As Parker-Hale did not introduce the M81 until 1983, this is anachronistic. 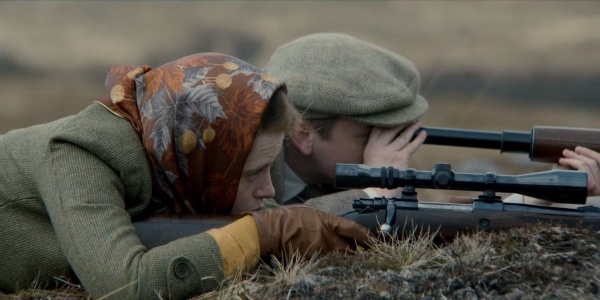 Queen Elizabeth hunts with her Parker-Hale M81 in "Marionettes" (S2E05).

American troops carry M1 Garand rifles. This was the main US battle rifle in World War II and Korea. 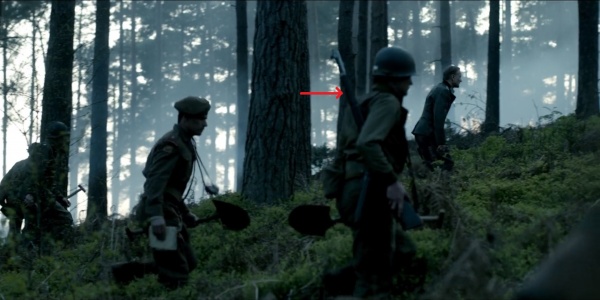 An American soldier with his M1 Garand (indicated by the red arrow) in "Vergangenheit" (S2E06). 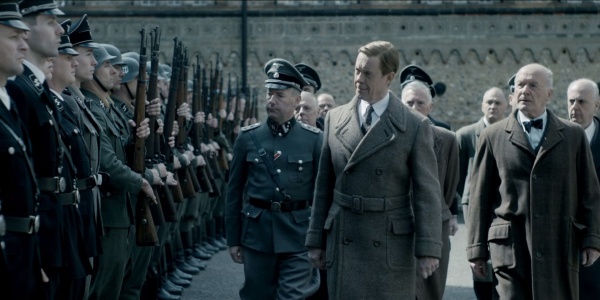 The Queen's Guard carry L1A1 self-loading rifles. This is the British version of the FN-FAL, which was the main battle rifle of most NATO countries from the 1950s until the 1980s. 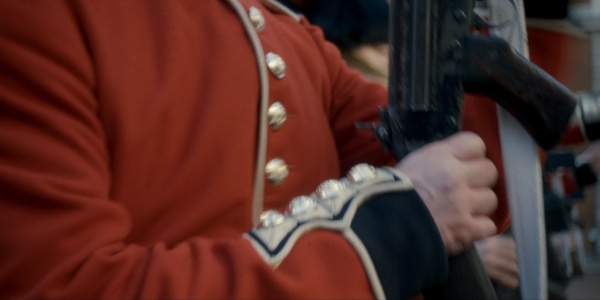 Another shot of the Queen's Guard doing squad drill with the L1A1 in "Dear Mrs. Kennedy" (S2E08).

Waffen-SS troops march with Mauser Gewehr 1898s. While Nazi Germany tends to be more associated with the K98k, the longer and older Gew. 98 would have been appropriate for ceremonial use. 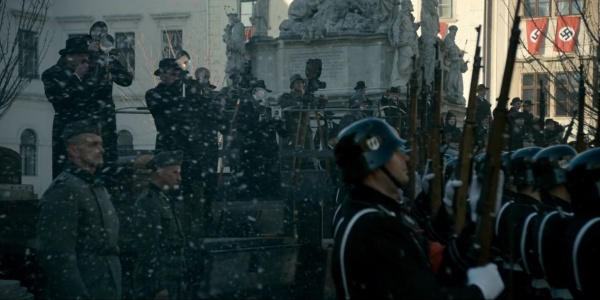 Many characters in the series are seen hunting with 12 Gauge Double Barreled Shotguns, in the side-by-side barrel configuration.

A double-barreled shotgun of the type seen throughout The Crown. The makes and models of the screen-used shotguns are probably impossible to determine. 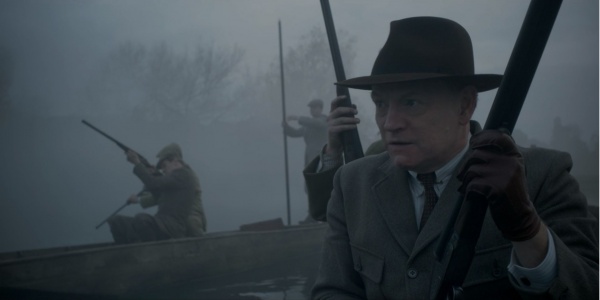 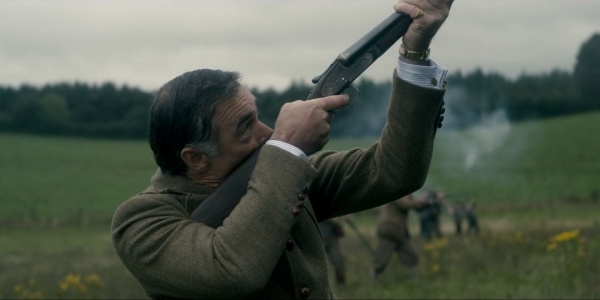 Lord Mountbatten with a double-barreled shotgun in "Windsor" (S1E03). 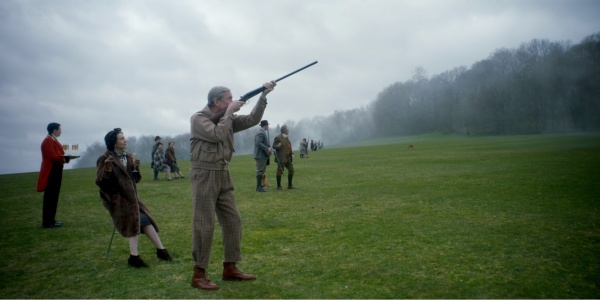 Edward, Duke of Windsor with a double-barreled shotgun in "Vergangenheit" (S2E06). 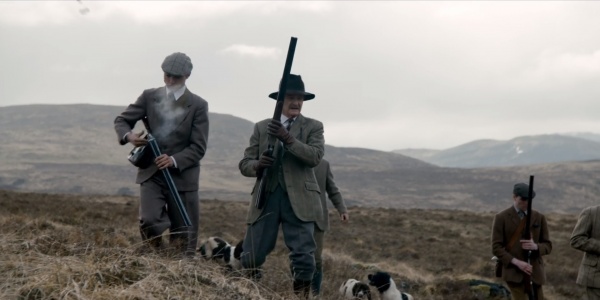 Ernst Augustus (Daniel Betts), Prince of Hanover wields a Winchester Model 1912 with a Cutts compensator, in contrast to the rest of his hunting party's double-barreled shotguns. Lord Mountbatten asks about it, to which Hanover replies, "I inherited it from my grandfather - as you know, Kaiser Wilhelm was not blessed with a normal physique ... but he loved to shoot, so modifications had to be made." Mountbatten also complains, "they didn't modify a shotgun, they modified a cannon."

This is all historically plausible. Kaiser Wilhelm II was delivered in a breech birth, and the use of forceps to assist delivery caused a severe shoulder injury. As an adult, his left arm was six inches shorter, and much weaker, than his right arm. He used many appliances and customized firearms to hunt. The Cutts compensator, like most recoil compensators, has a reputation for being very loud, hence Mountbatten's "cannon" comment. 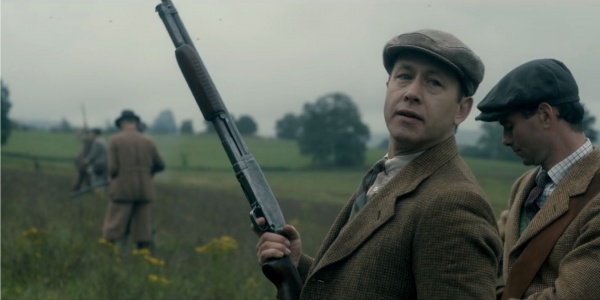 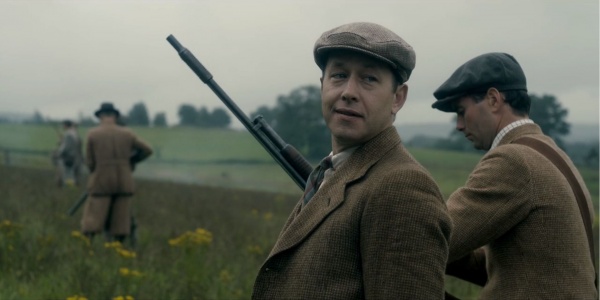 A clear shot of the Cutts compensator in "Windsor" (S1E03). 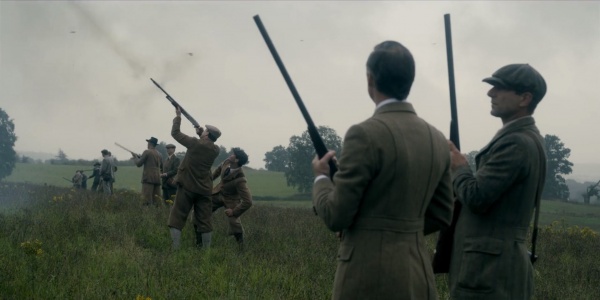 The effect of the Cutts compensator can be seen in this shot from "Windsor" (S1E03).

A Bren gun is carried by a British soldier riding on a tank in "Misadventure" (S2E01).. This was the standard British light machine gun through World War II and for many decades after. 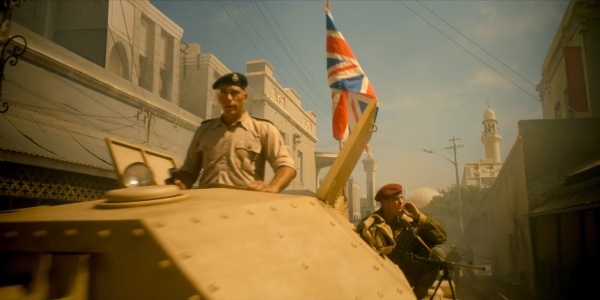 A British soldier on the right carries a Bren gun in "Misadventure" (S2E01).

A British soldier wields a Sten gun. The British made heavy use of the Sten submachine gun through World War II, but it was being quickly phased out in favor of the Sterling submachine gun by the time of this episode. 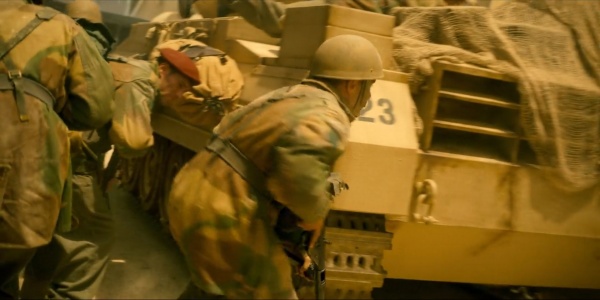 A British soldier with a Sten gun in "Misadventure" (S2E01).

A US soldier carries an M1A1 Thompson submachine gun. The "Tommy gun" was used by US forces from World War II through Vietnam.

An American soldier with a Thompson in "Vergangenheit" (S2E06).
Retrieved from "https://www.imfdb.org/index.php?title=Crown,_The&oldid=1328945"
Categories: