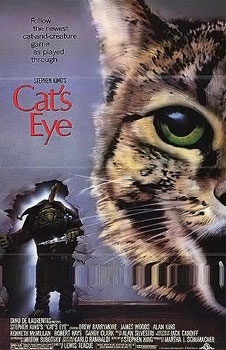 The following weapons were used in the film Cat's Eye (1985):

When Dick Morrison (James Woods) tries to save his wife from being electro-shocked, Junk (Tony Munafo) produces a snub-nosed Colt Python.

Junk retrieves it first however.

Donatti, Morrison and Junk all watch as Morrison's wife is shocked.

Donnati flashes his weapon at Morrison.

After Johnny Norris (Robert Hays) manages to win the bet that he would be able to climb around the whole of the building, Cressner (Kenneth McMillan) decides to have him killed. Cressner's chauffeur, Albert (Jesse Doran) then attempts to use a suppressed M1911A1 pistol.

Albert tries to shoot Norris, but trips over the cat.

Norris retrieves the M1911 and shoots Albert with it.