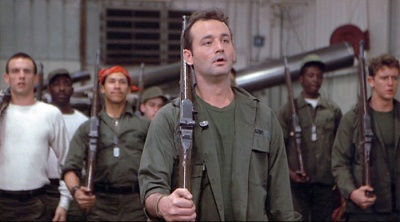 Bill Murray as John Winger holds a drill team version of an M1 Garand in Stripes (1981).

Bill Murray is an American actor/comedian who came to prominence as a regular on NBC's Saturday Night Live and would later appear in such classic comedies as Caddyshack, Stripes, and Ghostbusters (1984). He also appeared in the 2003 film Lost in Translation, a role for which he received an Academy Award nomination for Best Actor. In addition, he co-directed the 1990 feature film Quick Change. He also is the brother of actor/comedian Brian Doyle-Murray and Joel Murray.