Atomic Blonde is a 2017 American spy thriller set in 1989 Berlin just prior to the collapse of the Wall and starring Charlize Theron as Lorraine Broughton, an MI6 operative sent to retrieve a list of agents. Based on the graphic novel The Coldest City, the film was directed by David Leitch, the former stunt performer and co-director of John Wick. The cast includes James McAvoy, Sofia Boutella, John Goodman, and Toby Jones.

The following weapons were used in the film Atomic Blonde:

A Stechkin APS is used by Yuri Bakhtin (Jóhannes Jóhannesson) to kill James Gascoigne (Sam Hargrave), setting the plot into motion. Oddly, characters claim that a Soviet 7.62mm round was recovered from the body, despite the APS being chambered in the 9x18mm Makarov.

"Sticks and Stones, Jimmy."
The business end of the Stechkin APS.

Lorraine Broughton (Charlize Theron) owns a Browning Hi-Power that is very briefly seen as she prepares herself to go to the meeting with their superiors. Judging from the external extractor and old-style ring hammer, it appears to be a highly desirable 1960s "T" Series Browning Hi-Power.

Lorraine takes her Browning Hi-Power to put it in her handbag. 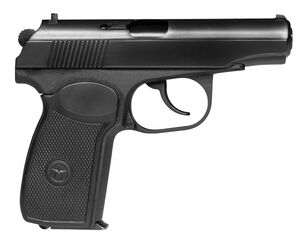 With a brief glance at the Makarov's black grip, Lorraine is beginning to realize that she got into the wrong car.

"Where the fuck were you?!"
She greeted Percival with her just acquired Makarov after a turbulent car ride.

Later, Lorraine has an idea how to surprise the coming down KGB agents.

Shortly after, she starts her flanking maneuver with the Makarov at the ready as the apartment brawl begins.

The Driver screws on a suppressor to his Makarov.

Lorraine herself takes a suppressed Makarov from an ice container.

The suppressed Makarov is used by Lorraine in the final fight.

The Driver (Declan Hannigan) brings his Tokarev into the back seat fight.

The KGB spotter (Greg Rementer) sneaks his way to the elevater with a suppressed Tokarev.

After the stairwell brawl, Lorraine holds the Tokarev TT-33 at a Volkspolizist.

A P226 of one Polizist on the floor after Lorraine disarmed him.

Another two officers hearing the fight noises and starting to check it out.

A police officer joining the fight fires at Lorraine as she makes her way out.

Close-up of the left rear part while dicovering a note.

"Satchel" confronted by Lorraine has reached the end of the line.

Delphine Lasalle (Sofia Boutella) carries a snub-nose revolver that appears to be a Manurhin MR-73 Defense. 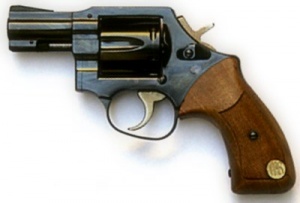 "Why the gun?"
The Manurhin MR-73 Defense is pointed at Delphine Lasalle (Sofia Boutella).

Lorraine (Charlize Theron) is seen using a CZ 75 "Pre-B" taken from a KGB agent during the apartment fight.

Reaching a dead end, she checks the magazine.

Lorraine awaiting an incoming KGB agent with the CZ 75.

Lorraine pinned down by the remaining KGB agent clings to the gun.

The same policeman in the right background with his MP5.

East German Grenztruppen border guards are seen with AK rifles with folding stocks, that appear to be AKMS rifles.

Border guards open fire at a burning Wartburg car of the Volkspolizei crashing into the wall.

Two border guards searching the area for the troublemaker.

The same border guards hold their AKMS startled by an explosion.

A border guard in the right background with his AKMS over his back which offers a view of the folded stock.

A KGB sniper (Daniel Hargrave) prepares a suppressed SVD Dragunov with black or black-painted furniture in the attempted assassination of Spyglass (Eddie Marsan).

The sniper inserts the magazine...

... and sets his Dragunov into position.

Waiting the moment to strike.

Close-up of the scope.

The sniper peeking through the window with the suppressed SVD.

In search of ammunition or another usable weapon, Lorraine discovers the disassembled Dragunov.

When there is no more ammunition you have to improvise.

U.S. soldiers on the western border crossing have M16A2 rifles.

An East-German UAZ-469 jeep is seen with a top-mounted DShK heavy machine gun at the border crossing.

The DShk manned by a border guard on the left.

The same jeep in the background behind the border barrier.
Retrieved from "https://www.imfdb.org/index.php?title=Atomic_Blonde&oldid=1441895"
Categories: