The following weapons were used in the film Adam's Apples:

Esben holds his Glock 19 on Ivan.

Adam (Ulrich Thomsen) draws a Vektor SP1 and presents it as a "solution" for the crow plague. He also carries it during the gas station robbery. Later, Khalid (Ali Kazim) also uses a Vektor SP1, wounding some of the Neo-Nazis.

Adam points his Vektor SP1 in the background, while Khalid uses his own pistol.

A closeup of Adam's SP1, with Ivan (Mads Mikkelsen) encouraging him to shoot the crows.

Khalid holds the SP1, having defended himself against the Neo-Nazis.

Adam wields the SP1 upon entering the gas station.

Khalid (Ali Kazim) uses this to shoot the crows. It is never shown in more detail than in these few scenes. It is clearly different from both the Vektor and Glock pistols.

Before the robbery, Gunnar (Nicolas Bro) is armed with an Astra 960. 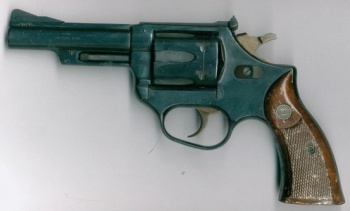 Gunnar holds his Astra after robbing the gas station.

The shotgun lies on the counter as Khalid steals from the cash register.

Khalid raises the shotgun upon leaving the gas station.

While preparing for the gas station robbery, Khalid (Ali Kazim) fires and unloads a SVD Dragunov without a scope.

Khalid fires the SVD Dragunov into the air.

Khalid unloads the Dragunov and places it in the trunk of his Ford Granada '82 hearse.
Retrieved from "https://www.imfdb.org/index.php?title=Adam%27s_Apples&oldid=768296"
Categories: