A Time to Love and a Time to Die

A Time to Love and a Time to Die is a 1958 war drama directed by Douglas Sirk and based on the 1954 novel by Erich Maria Remarque. Ernst Graeber (John Gavin), a German soldier stationed on the Eastern Front in 1944, is given a furlough. In his native town, nearly devastated by aerial bombardments, he meets Elizabeth Kruse (Liselotte Pulver) whom he knew from childhood. Young men fall in love and hastily marry, but Ernst is ordered to return to front and soon dies while reading a letter from Elizabeth.

The following weapons were used in the film A Time to Love and a Time to Die:

In the scene in Oscar Binding's villa a drunk SS officer Heini (Kurt Meisel) draws a Sauer 38H pistol. His pistol is then seen in hands of Ernst Graeber (John Gavin). 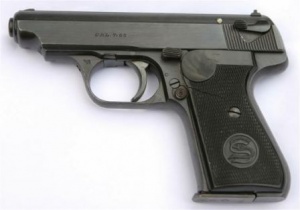 Heini holds his pistol while he describes how his men executed Russian POWs.

In the opening scene some German soldiers carry MP40 SMGs.

A soldier in center carries an MP40 with unfolded stock.

Another view of the MP40.

A soldier in center carries an MP40.

Hirschland (at the left, in steel helmet) carries a 98k rifle.

A soldier carries a 98k rifle. This is a model with hooded front sight.

Steinbrenner raises his rifle on Graeber who prevents the shooting of arrested Russian civilians. Now Steinbrenner holds a rifle with hooded front sight.

A German soldier carries a Sturmgewehr 44.

A soldier in center carries a Sturmgewehr 44.

Four antique long guns are seen on the wall in Oscar Binding's villa.

Two guns on top have flintlocks, the third from top has a typical outlook of a wheellock arquebuse, and the bottom gun hardly can be identified.

Several MG42 machine guns are seen in the opening scene. Immerman (Jock Mahoney) is one of the gunners.

Note that there is no barrel inside the barrel shroud.

Immerman with the MG42.

A soldier in center carries a Panzerfaust in the opening scene.

A closer view of a Panzerfaust.

A soldier carries a Panzerfaust in the final scene.

Two anti-aircraft guns are seen. They are seen only in distance; 8.8cm Flak 18 or Flak 36 or Flak 37 is a possible guess. 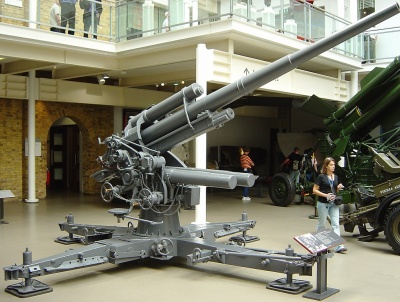 Ernst Graeber (John Gavin) carries a holster for Luger P08 when he is in furlough. Some other soldiers also carry Luger holsters. Pistols aren't seen, and the holsters are likely empty.

Graeber covers during the air bombing. His holster is seen.
Retrieved from "https://www.imfdb.org/index.php?title=A_Time_to_Love_and_a_Time_to_Die&oldid=1407846"
Categories: