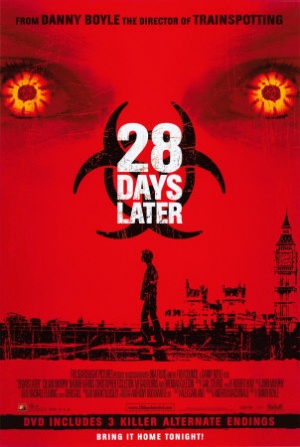 28 Days Later is a 2002 horror film that focuses on the effects of a virus outbreak occurring throughout Britain. The film was directed by Danny Boyle and starred Cillian Murphy, Naomie Harris, and Brendan Gleeson. A sequel, 28 Weeks Later, was released in 2007. Note: The video quality of the film is intentional as the movie was filmed with standard definition video camcorders.

The following weapons were used in the film 28 Days Later:

The British Army soldiers at the mansion in Manchester are mostly armed with L85A1 rifles, including Major Henry West (Christopher Eccleston), Sergeant Farrell (Stuart McQuarrie), Corporal Mitchell (Ricci Harnett), Private Beford (Ray Panthaki), Private Bell (Junior Laniyan), Private Clifton (Luke Mably), Private Davis (Sanjay Rambaruth), and Private Jones (Leo Bill). They are first seen when the soldiers kill an infected Frank (Brendan Gleeson). Jim (Cillian Murphy) takes Davis's rifle at the barricade after bludgeoning him with a crowbar and then later uses it to free Mailer (Marvin Campbell), an infected soldier and to bayonet Jones. Another one is seen behind Selena (Naomie Harris) in the cottage at the end of the film. In an alternate ending, Selena (Naomie Harris) uses a L85 to shoot open a door. 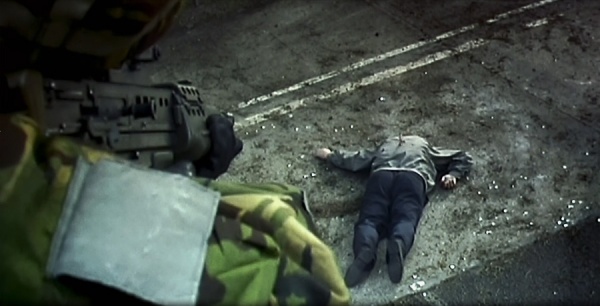 A soldier fires at an infected Frank. 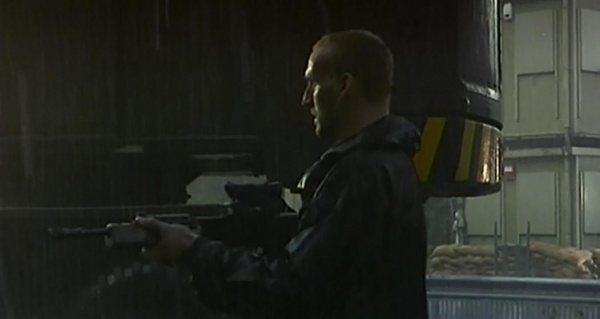 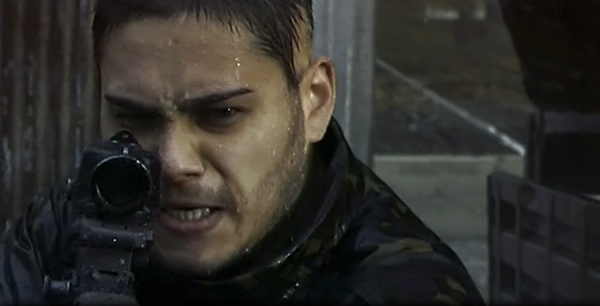 Private Bell cowers with his L85A1, telling Jim that he has no bullets left. 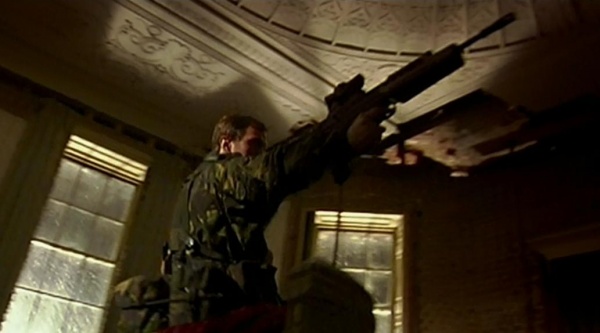 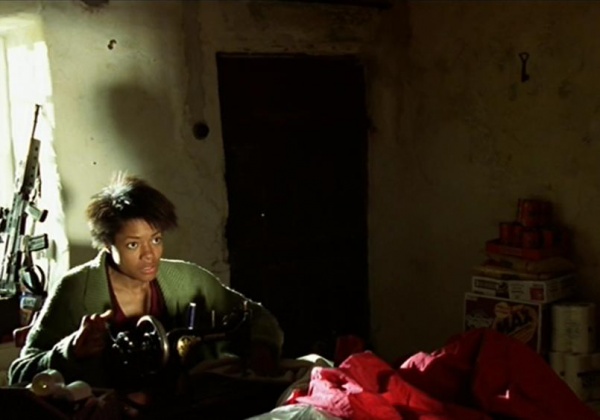 An L85A1 seen behind Selena. 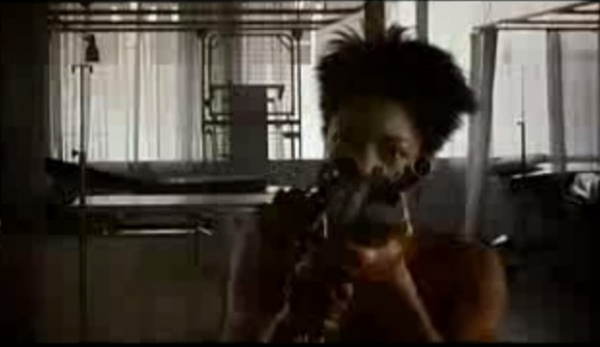 An L85A1 is being used by Selena in an alternate ending. 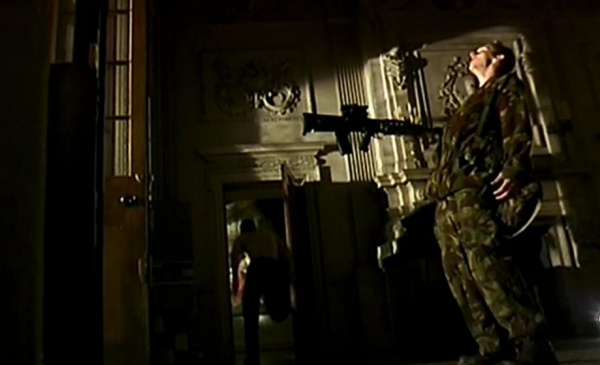 Private Jones after Jim impales him on a bayonet.

The Browning Hi-Power can be seen strapped to Major Henry West's (Christopher Eccleston) side in his dress uniform during the dinner scene and the barrel of it pops up at the end as he shoots and wounds Jim (Cillian Murphy). In an alternate ending, Hannah (Megan Burns) takes a Browning Hi-Power of a dead Jim. 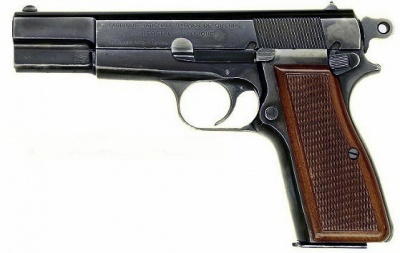 In the bottom right corner you can see the barrel of Major Henry West's (Christopher Eccleston) Browning Hi-Power. 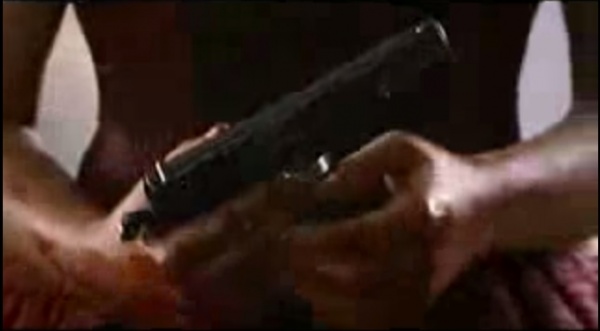 In an alternate ending, Hannah takes a Browning Hi-Power of a dead Jim.

The L7A2 GMPG (the British variant of the FN MAG-58) makes several appearances in 28 Days Later, and can be seen firing during the attack on the mansion. 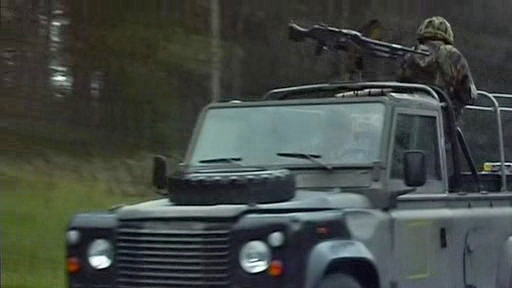 An L7A4 (vehicle mounted L7) can be seen mounted on the vehicle that takes Jim, Selena and Hannah. 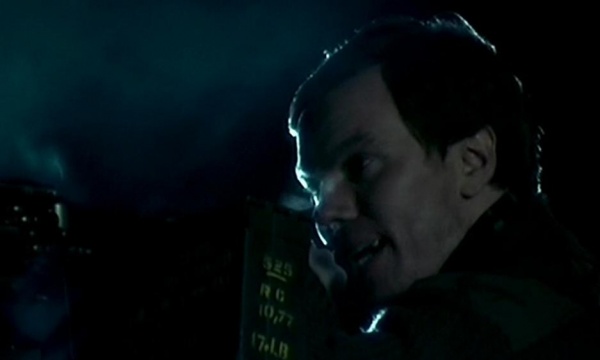 Close up of ammo box as soldier fires. 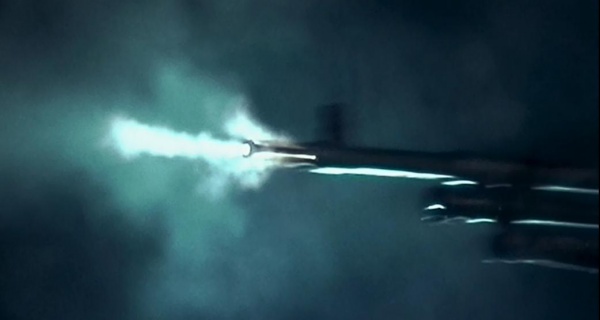 Close up of muzzle. 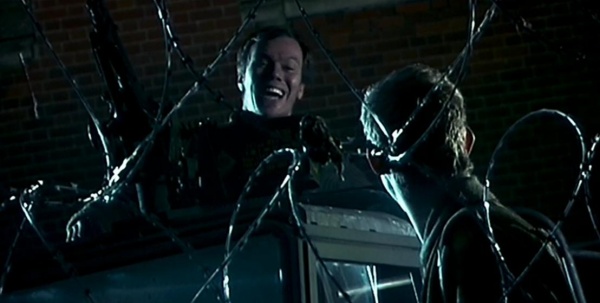 British soldier behind an L7A2 after the attack.
Retrieved from "https://www.imfdb.org/index.php?title=28_Days_Later&oldid=1536638"
Categories: