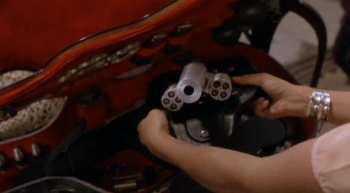 While not a real firearm, the Codpiece Revolver is a fictional prop done mostly as a 'gag' for director Robert Rodriguez. It is milled aluminum and 'erects' itself on a spring loaded mechanism. It is completely inert and has no operating parts to act as a firearm. Rodriguez (according to accounts) thought it was so funny that he swore he would find a way to use it in several of his movies. While it was initially only seen in passing in Desperado, he later gave the weapon to the character Sex Machine in From Dusk Till Dawn (1996), who used it to kill several vampires on screen. The prop would later be featured in two other Robert Rodriguez productions: 2013's Machete Kills and the 2014 television adaptation of From Dusk Till Dawn.

Note: the "Penis Gun" is slightly more prevalent than most people think, thanks mostly to the 'raunchy sense of humor' of many art directors and script writers. Several prototype (and somewhat X-rated) props have been built in the business. For example, for an unfinished low brow comedy, a .12 gauge pump style phallic weapon was created as well as a short stroke .22lr mini pistol. But unless the item is actually used and seen in a film, these items are carefully locked away in drawers in prophouses away from the public's eyes (which is probably a good thing....)

The Codpiece Revolver is seen in the following: