Wonder Woman 1984 is the 2020 sequel to the 2017 DC Comics feature film adaptation. Gal Gadot returns as Diana, the Amazonian demigod who once again is living in secrecy when she is unexpectedly reunited in the 1980s with Steve Trevor (Chris Pine), the former U.S. military intelligence officer who seemingly met his demise during World War I. Patty Jenkins returns from the original film to direct the sequel, and the cast includes Kristen Wiig and Pedro Pascal. The film was set for release on June 5, 2020, but was first postponed to August 14, then October 2, and premiered in the US both theatrically and on HBO MAX on December 25, 2020.

The following weapons were used in the film Wonder Woman 1984:

Uniformed guards at the White House are armed with the M1911A1.

Uniformed guards are armed with the M1911A1.

A Smith & Wesson 469 pistol appears to be used by a gunman during the mall shootout. Diana is seen disarming the criminal and then destroying the pistol. 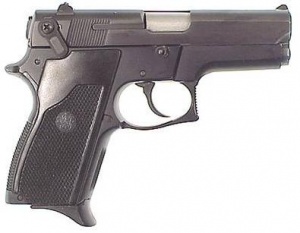 The Smith & Wesson 469 pistol is seen on the left.

Diana is about to crush the Smith & Wesson 469 pistol.

A Smith & Wesson Model 36 appears to be used by a gunman during the mall shootout.

On the right, a Smith & Wesson Model 36 revolver appears to be used by a gunman

A Secret Service Agent armed with the Smith & Wesson Model 19 revolver is subdued by Diana's lasso.

US forces are seem armed with M16A2 rifles.

US troops are seen armed with M16A2 rifles.

A Browning M2HB is also used by Egyptian forces.

The handle is charged on the Browning. This shot was reversed in the finished film.

The Browning's triggers are depressed.

The Phalanx Close-In Weapon System is used at an American base. 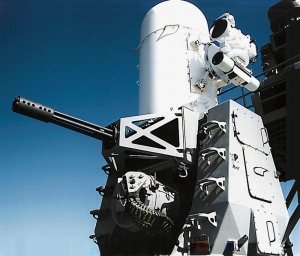 The Mk 19 grenade launcher is seen used by US forces during an engagement.

A US soldiers uses the Mk 19 grenade launcher during an engagement.
Retrieved from "http://www.imfdb.org/index.php?title=Wonder_Woman_1984&oldid=1506147"
Categories: