War Dogs is a 2016 war comedy starring Jonah Hill and Miles Teller as two young friends who find themselves getting a $300 million contract from the US government to transport arms to troops in Afghanistan. The film, which was based on a true story, was directed by Todd Phillips and the cast includes Bradley Cooper and Ana de Armas.

The following weapons were used in the film War Dogs:

While at an arms depot, Efraim Diveroli (Jonah Hill) is seen firing an AKM.

What appears to be a Colt AR-15 with a Fake M203 Grenade Launcher is seen on display in Efraim's office. This is likely a tribute to the film Scarface (1983), as a poster of the film also hangs in the office.

World IMFDB Exclusive: Screen used Faux M203 Launcher with M16A1 with Quadrant and Front ladder sight - 5.56x45mm. This is verified screen used from the film Scarface. Photographed exclusively for IMFDB by MoviePropMaster2008. Two 30 round magazines have been taped together with black gaffer's tape to emulate the way Tony Montana loaded his weapon in the film. What is interesting is that the tape in the movie does really appear to be motion picture gaffer's tape, which would only be common on... a movie set.

The rifle combo is seen in the upper right.

A still of Al Pacino from Scarface (1983) holding "My Little Friend" is seen at the left.

The first major contract of AEY to the US government is to provide several thousand Beretta 92FS pistols for the US Army to arm the new police force in Baghdad, which David and Efraim end up having to smuggle in person from Jordan due to Italy having an embargo on exporting arms to Iraq.

The Beretta on display.

A Glock 17 is seen in the hands of Efraim while at a shooting range. A gangster displays his Glock to Efraim.

A gangster displays his Glock to Efraim.

A Glock 17 is seen in the hands of Efraim while at a shooting range.

Closeup of the Glock being loaded.

Henry (Bradley Cooper) is seen holding what appears to be a nickel Jericho 941RS to threaten David Packouz (Miles Teller). 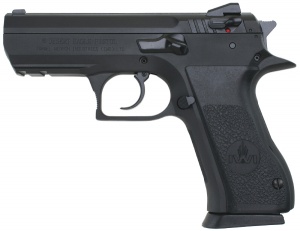 David Packouz (Miles Teller) is threatened with the pistol.

Henry (Bradley Cooper) is seen holding what appears to be a nickel Jericho 941RS.

The M2 are mounted on US military Humvees.

The M2 seen on the humvee at the left.

The Mk 19 seen on the humvee at the right.

An Airtronic RPG-7 launcher is seen on display in David's office.

The launcher is seen behind David.

During a weapons expo in Las Vegas, Efraim is seen handling a standalone version of the M26 MASS (Modular Accessory Shotgun System).

During a weapons expo in Las Vegas, Efraim is seen handling a standalone version of the M26 MASS.
Retrieved from "http://www.imfdb.org/index.php?title=War_Dogs&oldid=1321780"
Categories: