Walking Dead: World Beyond, The - Season 1

The following weapons were used in Season 1 of the television series The Walking Dead: World Beyond:

The US Marines, including Drake (Gil Perez-Abraham), Owens (Michel Curiel), Simms (John Paul Steele), and Wilkins (Dave MacDonald), carry Beretta 92FS pistols in holsters in "Truth or Dare" (S1E07), standing in for the US military's M9.

In addition to the M4A1, CRM soldiers have Glock 17 pistols as sidearms. They can be seen in a belt holster in "Brave" (S1E01) and "The Tyger and the Lamb" (S1E03). In "Brave" (S1E01), Amelia May Ortiz (Christina Brucato) and Hope (Samantha Lorraine) also hold Glock 17s. Elizabeth (Julia Ormond) uses a Glock 17 in "The Tyger and the Lamb" (S1E03). Felix (Nico Tortorella) uses a Glock 17 in "The Wrong End of a Telescope" (S1E04), "Shadow Puppets" (S1E06), and "Truth or Dare" (S1E07). Frank Newton (Robert Palmer Watkins) and another CRM soldier (Aaron Snyder) have holstered Glocks in "The Sky Is a Graveyard" (S1E08). Hope (Alexa Mansour) steals Felix's gun, after revealing Huck's betrayal in "The Deepest Cut" (S1E09). In the Season 1 finale "In This Life" (S1E10), she points gun at Huck while trying to get answers. In a continuity error, Huck's Walther CCP transforms into Felix's Glock. Hope removes the silencer and points the gun at herself, threatening to kill herself if Huck and Felix don't stop fighting. During the arrest of Silas by the CRM soldiers, one of them has a Glock in a holster.

CRM Soldiers have Glock 17 as their sidearms in the series premiere "Brave" (S1E01).

Security guard Huck (Annet Mahendru) carries a Walther CCP pistol as her primary weapon. Campus head of security Felix (Nico Tortorella) checks her gun in "The Blaze of Glory" (S1E02). Huck uses a Walther CCP in "The Wrong End of a Telescope" (S1E04) and "Truth or Dare" (S1E07). Huck's pistol is briefly seen in her holster in "The Sky Is a Graveyard" (S1E08). Huck uses her silenced pistol to kill walkers in "The Deepest Cut" (S1E09). Felix pulls the pistol from Huck's holster and points it at her, but loses it during a fight. In a continuity error, when Hope pick up it, the Walther transforms into Felix's Glock. Hope keeps Huck at gunpoint throughout the trip to the meeting point with Elizabeth. When they arrive, Hope gives up the gun. This gun is an anachronism since the outbreak started in 2010 and the CCP was introduced to the US market in 2014 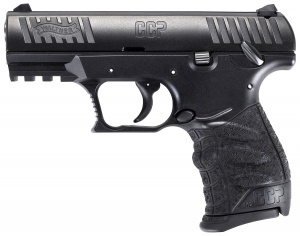 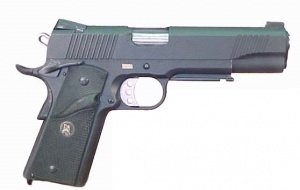 Walter points the gun at Hope.

The CRM soldiers are armed with M4A1 carbines that has been customtized with a Trijicon ACOG scope and a dual stabbing implement, but without the "chainsaw"-style grip as seen in Fear the Walking Dead. The carbines are first seen in "Brave" (S1E01), when several soldiers led by Elizabeth arrive to meet with Campus Colony. When several walkers, attracted by the helicopter, arrive at the meeting point, Elizabeth gives the order to shoot them. Later, the carbine is seen in the hands of one of the CRM soldiers (Aaron Snyder) when they arrive at Campus Colony. At the end of the episode, CRM soldiers kill alive and undead Campus residents. Elizabeth asks for a rifle from one of the soldiers named Barca (Al Calderon), and kills a walker. The CRM soldiers who accompany Barca are also armed with carbines in "The Tyger and the Lamb" (S1E03). Huck, Owens (Michel Curiel), Simms (John Paul Steele), Wilkins (Dave MacDonald), and other US Marines also uses the rifles with ACOG scopes and Aimpoint CompM2 red dot sights in a Huck flashback in "Truth or Dare" (S1E07). One of the CRM soldiers (Aaron Snyder) holds a Civil Republic rifle in "The Sky Is a Graveyard" (S1E08). CRM soldiers shoot walkers while chasing Will Campbell (Jelani Alladin) in "The Deepest Cut" (S1E09). The CRM soldiers who look for the Endlings are also armed with rifles in "In This Life" (S1E10). CRM soldiers accompanying Elizabeth when meeting with Huck and Hope are armed with M4A1s.

Huck with an M4A1 carbine fitted with a KAC handguard and ACOG scope.

The Campus guard on the lookout tower has what appears to be a Norinco Type 56 rifle.

In "Brave" (S1E01), the rifle is seen at the right leaning up against the rails on the guard tower.

A few muzzle-loading muskets with bayonets are seen in one of the photographs in Tonnie and Percy's CRM truck in "Truth or Dare" (S1E07).