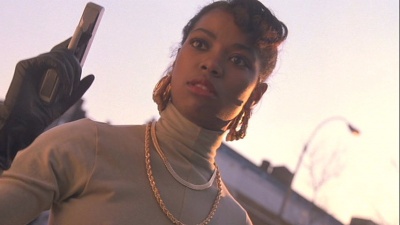 Vanessa A. Williams carries a Detonics Pocket 9 as Keisha in New Jack City.

Despite being born the same year (and is the same age) as Vanessa L. Williams, Vanessa A. Williams started her acting career a few years after the 'other Vanessa Williams'. Her first television role was as one of Theo's girlfriends in the long running sitcom The Cosby Show in 1989. Her first major film role was as Keisha in New Jack City in 1991. Apparently it never bothered her that she was constantly being confused with the 'other' Vanessa Williams.