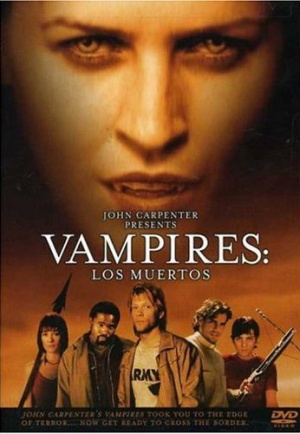 The following guns were used in the film Vampires: Los Muertos:

Various characters use the S&W Model 916A Shotgun, introduced to them by the character Ray Collins. Ray calls his weapon "Miss Piggy."

Ray Collins (Darius McCrary) reveals how he is able to kill vampires with a 12 gauge, custom made hardwood slugs with lead cores.

Ray Collins (Darius McCrary) and the other Vampire hunters enters a Mexican bar after the Vampires have massacred everyone inside. He carries Smith & Wesson 916A shotgun - 12 gauge.

Ray Collins (Darius McCrary) shoots his Smith & Wesson 916A shotgun "chicken wing" style, primarily because the butt-plate is attached to a swivel on his shoulder rig, which allows him to hide the shotgun under his trenchcoat in public - 12 gauge. Collins can't raise the butt-stock any higher when the shotgun is attached to this 'stealth' rig, which makes it a point and shoot weapon, however, the rig does absorb all of the gun's "recoil".

Sancho (Diego Luna) takes Collins' S&W 916A shotgun after his death and uses it in the final battle - 12 gauge.

Inexplicably, before the character with the Vampire killing shotgun appears, there is a Smith & Wesson 916A Shotgun seen on the van's door.

Several characters have a 12 Gauge Single Shot Shotgun. One is a former Vampire hunter and the other is a 'guard' for the monastery. The exact make and model is unknown.

Lester Pomani, played by an uncredited actor, lies dead in a bathtub, the victim of a 'staged suicide' by single barreled shotgun (Make unknown) - 12 gauge. Also a 12 gauge to the head would do a lot more damage than what we see here.

Monastery Guard (Enrique Munoz) runs up to meet an attack by Vampires against the monastery with a woefully inadequate single shot breach loading shotgun - 12 gauge. Having a weapon with such limited firepower in the face of an impending attack is ridiculous.

Though a single shot weapon is better than nothing, it is next to useless against an attack by multiple targets. It is assumed that one would not face an army of attacking vampires with a weapon that only fires one shot? 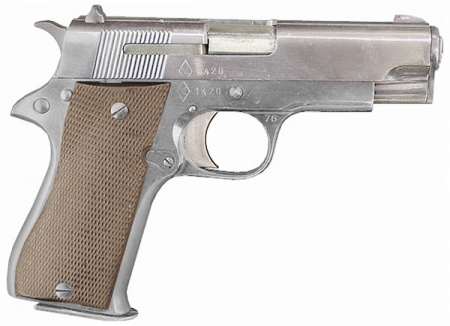 Derek Bliss (Jon Bon Jovi) uses a gun that fires wooden spikes into Vampires. It appears to be a fully fabricated prop and not based on any live weapon. Though it is seen packed with CO2 cartridges, there is an obvious charge (with flash, sparks and smoke) that propel the spikes out of the gun.

A closeup of the spike gun.

A Gamo Air rifle, unknown model, can be seen on the rack that previously held the S&W 916A shotgun, in one sequence.

As Derek Bliss speaks, to the right we see the Gamo Air rifle in the door rack.

A view of the spears and spikes used in Vampire hunting. The sheer mass and volume of the weapons could not be hidden within a normal looking surfboard, nor carried, like a normal surfboard would be.

A view of the Spike gun and the CO2 cartridges, however the spike gun uses explosive propellants when seen firing.

A view of the Star Model BM. Note that it is too long to be the Star Model PD.
Retrieved from "http://www.imfdb.org/index.php?title=Vampires:_Los_Muertos&oldid=704860"
Categories: