I was going to finish screencapping Predator 2 when i finish with We Were Soldiers. Thanks for putting the gun pics on the page.-Oliveira 19:36, 8 August 2009 (UTC)

HEY learn how to format your pictures!

Stop adding movies that don't have pages or IMDB entries.

You can't seriously expect us to accept you adding lists of weapons from films which we can't even demonstrate exist. Vangelis 05:10, 19 August 2009 (UTC)

Revolvers are not considered "pistols" in most countries (U.S. included). Please do not make such a huge change to the site without discussing it first. You can always ask me or another administrator if you want to do this, and we can talk about it. Thank you. -MT2008 15:05, 20 December 2009 (UTC)

If you're going to put pictures on a gun page, you use the "right" align command. Otherwise, you're just making the page look screwy. But anyway, we do not put screen-used guns on the regular gun pages (unless it's a gun for which we have no other pictures) - instead, we keep them only on the pages for those particular movies. -MT2008 01:39, 22 December 2009 (UTC)

OK, this is getting quite annoying. You have been making too many mass edits to the site, without asking anyone or discussing it first, and your edits tend to cause problems because they are either (A.) inaccurate, or (B.) screw up pages. If you don't stop doing this stuff, I am going to have to give you a time-out (read: temporary ban). -MT2008 01:42, 22 December 2009 (UTC)

And now you're making pages for fictional weapons that aren't actually firearms, or separate pages for firearms that aren't fictional (like Scarface's Little Friend). I've deleted most of them. -MT2008 14:51, 22 December 2009 (UTC)

600px is WAY too big for the gun pictures, bro. You are making way too many edits now, and you aren't consulting with any of us. And...you are also not responding. I'm worried you're going to really screw things up without telling us, and I'm going on vacation. So...to make sure that you don't do anything, I'm putting you on time-out. You can come back to the site in 1 week. Thank you. -MT2008 01:26, 25 December 2009 (UTC)

Well, I see your time-out didn't deter you. You are again doing the same thing for which you were banned. So...I'm going to give you another temporary ban. Next time is permanent. People have already asked me to get rid of you for good. -MT2008 14:52, 1 January 2010 (UTC)

You added this image to the PPK page. 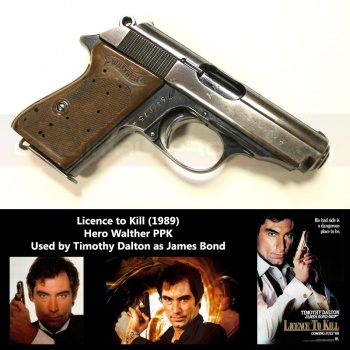 We already have the necessary PPK images on that page. When we have a screen used gun image, we use it on that film only unless that is the only image we have. Then it's used on other pages. --Predator20 22:05, 22 February 2010 (UTC)

You are adding unnecessary gun images to the gun pages and they are not aligned properly to boot. Please do it correctly or not at all. MoviePropMaster2008 05:11, 25 February 2010 (UTC)

Okay, start listening to people or you're gone

You keep on adding unnecessary images to gun pages, which isn't so bad, but you never align them properly, and you don't listen to anyone who tries to tell you otherwise. You get a one month time out. MoviePropMaster2008 05:20, 27 February 2010 (UTC)

I've noticed that you made false information on Naomi Watts. She didn't use a Thompson in King Kong and the only gun she used is a Beretta 92FS, which appeared in The International. - Kenny99 02:48, 26 May 2010 (UTC)

This is the discussion page for an anonymous user who has not created an account yet, or who does not use it.

We therefore have to use the numerical IP address to identify him/her. Such an IP address can be shared by several users. If you are an anonymous user and feel that irrelevant comments have been directed at you, please create an account or log in to avoid future confusion with other anonymous users.