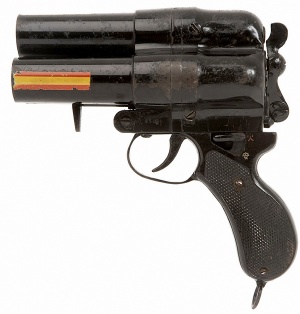 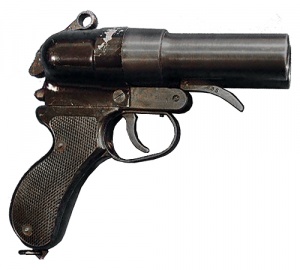 The Type 90 is a signal pistol of Japanese origin that was used by the Imperial Japanese Navy during WW2. The designation is from the last two digits of its year of adoption, which was 2590 (or 1930 AD) on the Japanese Kōki calendar. It first came with three barrels with just less than 6,000 were manufactured, but eventually manufactured with two barrels for ease of production late in World War 2.

Coming in either double or triple barrels, the Type 90 is often seen in many movies wrongly portrayed often as a Shotgun Pistol due to its unusual appearance. The flares came in white, red, yellow, green, blue, and black. They had cardboard hulls with a brass or steel base.