Total War: Shogun 2 is a 2011 strategy video game developed by Creative Assembly. Set in feudal Japan in the 16th century, players control one of nine major clans vying for control of the fractured nation. While battles are carried out primarily with traditional weapons like spears, swords, and bows, clans can come into contact with European traders that can provide access to gunpowder weapons.

The Tanegashima is a Japanese matchlock arquebus used during the Sengoku Jidai and to some degree, during the Boshin War. It is used by most matchlock-type units as well as the foreign-recruited Portuguese Tercos available in the Otomo Clan DLC. It is also used by the traditional Matchlock Kachi skirmish unit in the Fall of the Samurai expansion.

Portuguese Tercos also use Tanegashimas in-game. In reality, the Japanese Tanegashima was based on Portuguese arquebuses, so it would have been more appropriate to give this unit a unique arquebus model, but this wasn't done presumably to save the effort of modeling an additional asset just for a single unit. Also note what appears to be an anachronistic British Cavalry Pattern 1796, Heavy Cavalry Trooper Sword, which is used as a backup weapon in the event of melee contact.

The Japanese Ō-zutsu is used by the Heavy Gunners, Fire Rockets, and Tokitaka's Tanegashima. The Ō-zutsu is a heavy Tanegashima akin to a hand cannon. 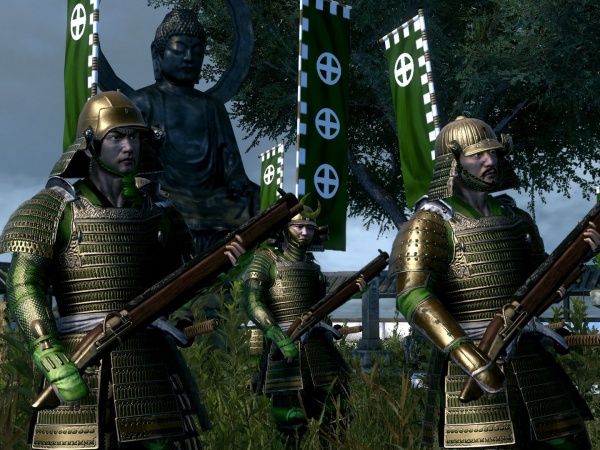 A line of Tokitaka's Tanegashima infantry volley fire their weapons.

The Japanese Bajō-zutsu, also known as Chu-zutsu, is used by the Donderbuss Cavalry unit only available in the Otomo Clan Pack DLC. The Bajō-zutsu is essentially a portable Tanegashima intended for cavalry use akin to European dragoon carbines or pistols. It is depicted in-game with a somewhat "blunderbuss-erized" barrel, hence the unit's name, though there is no evidence of Japanese matchlocks with such exaggerated blunderbuss style barrels. It is the most powerful firearm in the game due to the shotgun effect it delivers against its targets.

An early modern example of a Blunderbuss or Donderbuss 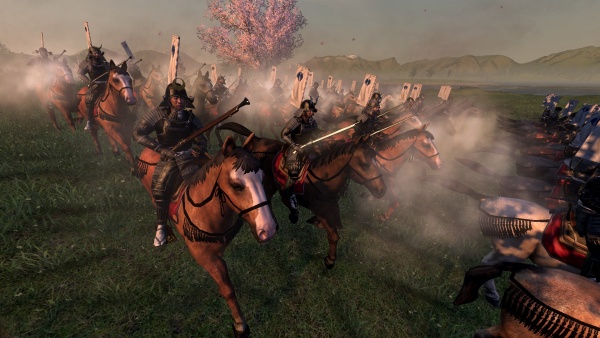 The Japanese Ishibiya (石火矢) hand cannon is used by the Hojo Hand Mortars unit. It is commonly believed that the first encounter of the Japanese with firearms was with the arrival of the Portuguese in the 16th century, however, it appears that earlier and more primitive guns like the Ishibiya were also used prior to this. The Ishibiya appears to have originated from the medieval Chinese hand cannon known as a Chong or Huochong. 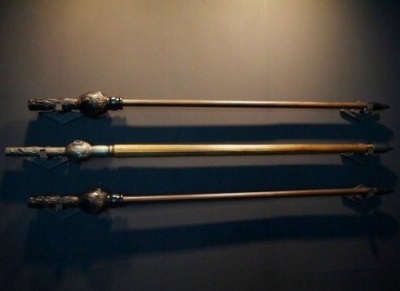 A European-style cannon from earlier designs typical for the 14th-15th century period is used by the European Cannons unit.

The Horokuhiya (焙烙火矢), also known as the Horokudama or simply Horoku Bomb, is used by the Fire Bomb Throwers and Fire Bomb Kobaya units. Horoku means "earthenware pot", however, the bomb itself was made of iron and not ceramic. The Horoku consisted of two iron hemispheres joined together, a fuse, and a rope for throwing. The bomb was whirled around the thrower's head and thrown in a similar manner to Olympic hammer throwing. The Horoku likely originated from the earlier Chinese Zhen Tian Lei or thunder crash bomb which the Japanese encountered during the Mongol invasion of 1274. The Horoku was also used as a naval weapon by the Murakami navy during the First Battle of Kizugawaguchi in 1576. 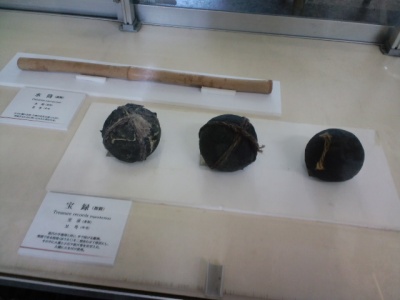 The Japanese Hōseki Catapult is used by the Fire Projecting Mangonels unit.

Total War: Shogun 2 — Fall of the Samurai is a standalone expansion pack for the game that moves the action to the mid-1800s, against the backdrop of the Boshin War. The expansion adds many new units armed with new, modern weapons, contrasting against the continued use of traditional melee and ranged weapons by some clans.

The Smith & Wesson Model 2 is added with this expansion pack and usually wielded by officers and is also used by the Foreign Veteran agent during the campaign. Cavalry units like the Revolver Cavalry and the General's Bodyguard use this particular model. 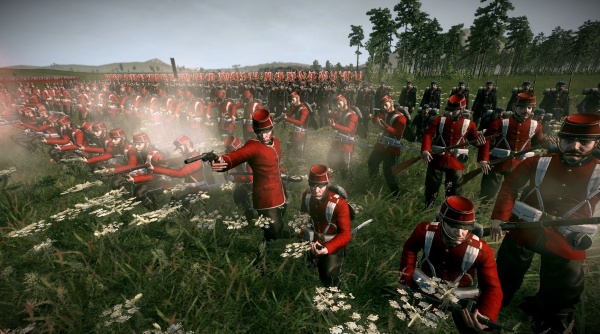 An officer from the Royal Marines fires his Smith & Wesson Model 2 along with his fellow men.

A Colt 1860 Army is seen on the cover, but does not appear in the game. 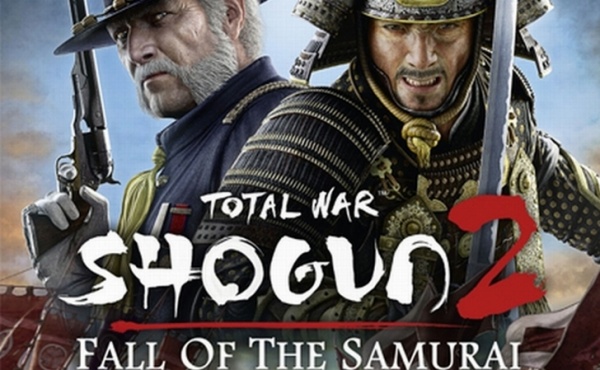 Most of the line infantry-type, levy infantry-type, and skirmisher-type units (with the exception of Tosa Riflemen) in Fall of the Samurai use the Pattern 1861 Enfield Musketoon. Units like the Shinsengumi Police Force, Yugekitai, and the foreign-recruited U.S. Marines use this particular model. Oddly enough, they use the same gun albeit with different effective ranges depending on the unit stats. 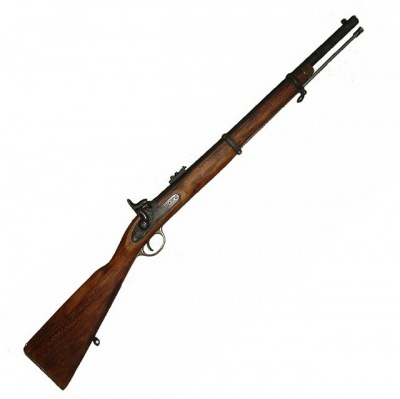 A reproduction of the Pattern 1861 Enfield Musketoon - .577 Ball 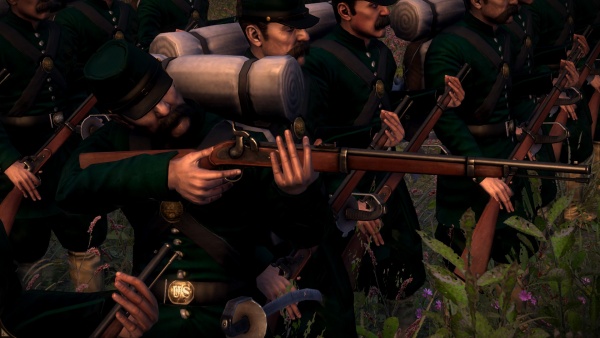 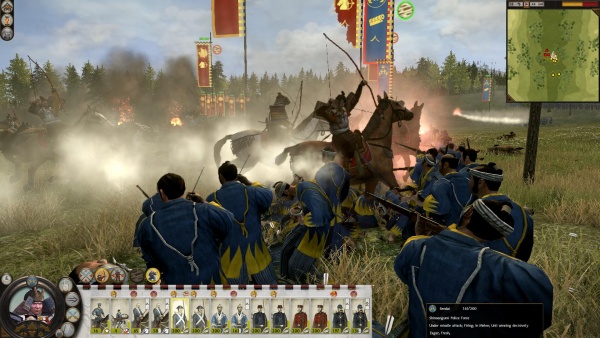 A unit of the Shinsengumi Police Force attempt to repel an attack by a Mounted Samurai unit from the Rise of the Samurai Expansion with their muskets.

The British Snider-Enfield Rifle is used by first-tier elite troops, usually by the Imperial/Shogunate/Republican Infantry unit, the Kihetai, and the foreign-recruited Royal Marines. 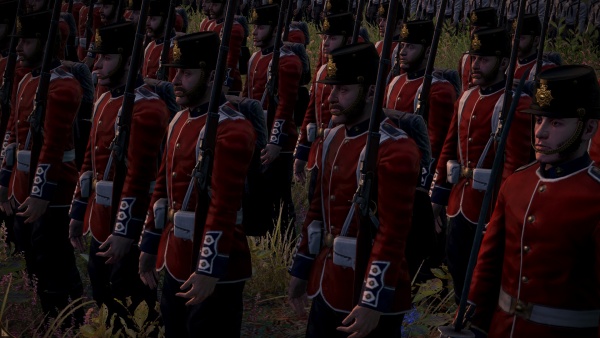 Royal Marines and their Snider-Enfield rifles.

The Spencer Repeating Rifle is used by the Tosa Riflemen, Carbine Cavalry, and Imperial Guard Cavalry. In some mods, they are used as a replacement weapon for the Tanegashima used by sailors. 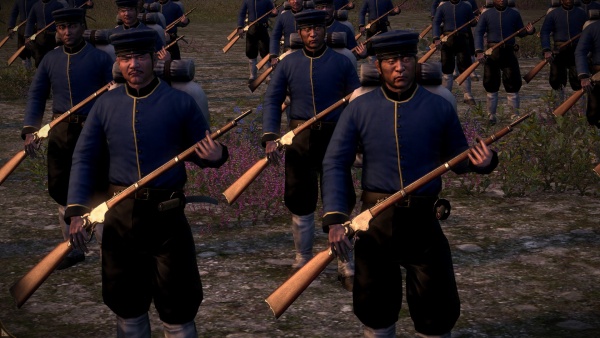 The French Fusil Modèle 1866 Chassepot rifle is the most powerful rifle in the game and is commonly used by more elite units like the Imperial/Shogunate/Republican Guard Infantry and by the foreign-recruited Infanterie de Marine. Due to their fast firing rate in-game, they have a tendency to run out of ammo very quickly particularly when in Kneel Fire mode. 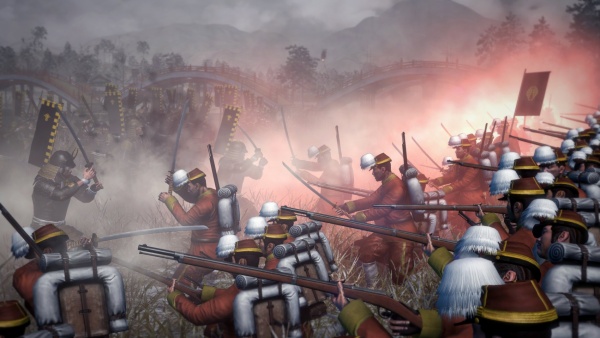 Imperial Guard Infantry from the Saga Domain fire their Chassepot 1866 at a unit of Aizu Katana Kachi. 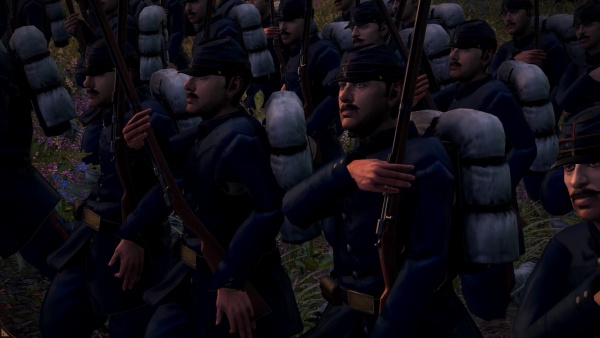 The 1874 model Gatling Gun, apparently inspired by The Last Samurai, is also in the game and can be used as an area-denial unit. The proper right side mounted iron sight is not present and instead it has a top mounted sight from the M1862 Type II model. It is also used by the American Roanoke-class ironclad, but can only fire broadside. It can be the most lethal weapon against enemy crewmen during naval combat in Fall of the Samurai. This is the first-time an automatic weapon was introduced in the Total War series. 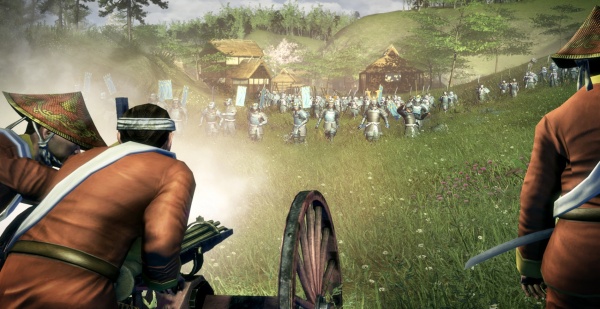 A Gatling Gun crew fires the weapon at approaching Samurai. 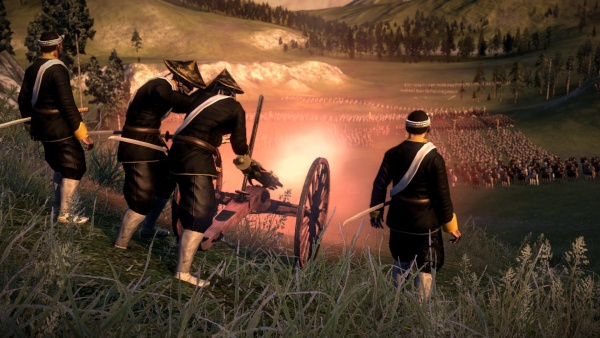 Another Gatling Gun opens up on a large group of cavalry. 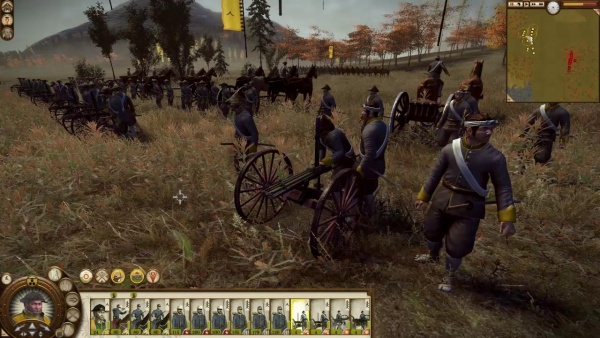 A large group of Gatling Guns lie in wait.

Wooden Cannons are, as the name suggests, made of wood. This makes them somewhat ramshackle in their operations, with a slow reload rate and an immobile platform from which they cannot move. They have a very poor accuracy in-game and can fire only a few rounds before it must be considered useless. 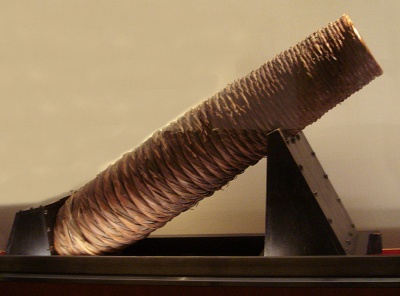 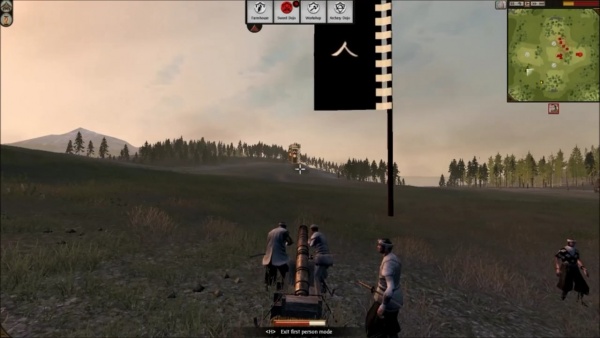 Wooden Cannons used in first-person mode. This feature would later be implemented for almost all siege artillery units in the Total War series

The Parrott Gun is the second most powerful artillery unit in the game. It's a muzzle loader and can fire explosive and canister shells. But, it is the slowest unit in-game, along with the Gatling Gun and the Armstrong Gun, due to its heavy load. 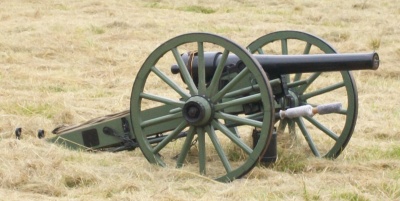 The Armstrong Gun is the most powerful artillery unit in the game. Based on the RBL 12 Pounder 8 cwt gun, it can also fire explosive and canister shells in-game. It has a longer range than the Wooden Cannon and the Parrott Gun, but is more expensive than the other two. A naval version of the Armstrong Gun is used as a coastal battery and as a main gun on all of the ships in Fall of the Samurai and is modeled after the Ordnance 110-pounder RBL 7 Inch Gun. Along with the Gatling Gun and the Parrott Gun, it is the slowest unit in-game due to its heavy load. 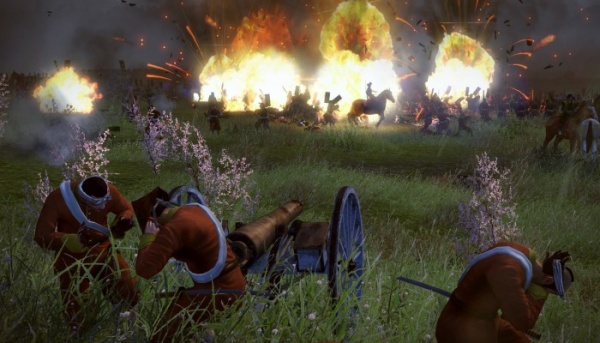 A gun crew covers their ears after firing the Armstrong Gun. 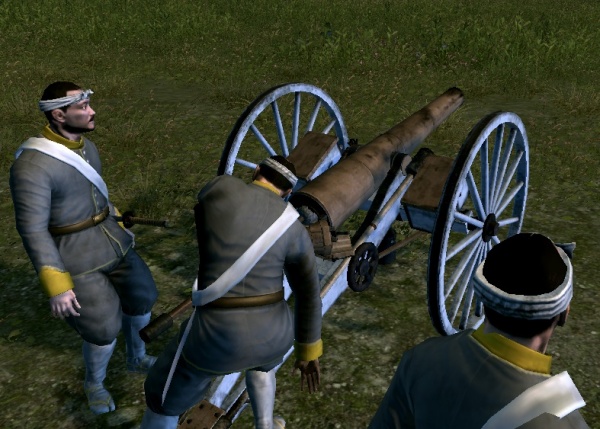 Another crew reloads their Armstrong Gun. 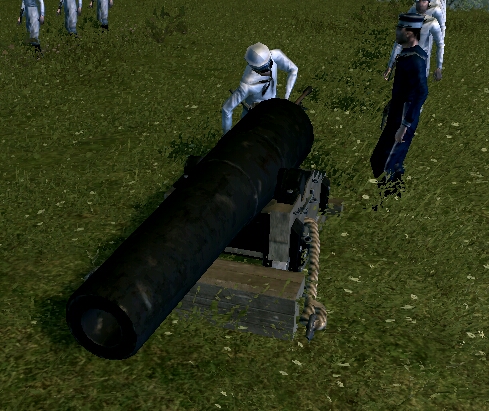