Tom Horn is a 1980 Western that marked the second to last movie that Steve McQueen starred in prior to his passing. This movie is a somewhat fictionalized account of a former scout and gunman who was found guilty of the 1901 murder of a fourteen year old sheepherder named Willie Nickell in Wyoming. Horn was executed for the murder in 1903. Horn served as a civilian Army scout in the Apache wars in Arizona and served as a Pinkerton detective later. He is believed to have been involved in the Johnson County War on the side of the private army funded by the cattle barons. He was working (again) for cattle barons in Wyoming at the time of Willie Nickell's murder. Part of his work was to deal with sheep farmers. There is much myth and controversy surrounding Tom Horn, and the film incorporates both myth and what was then current historical research. Though not a success when it was released in the spring of 1980, Tom Horn has come to assume something of a cult status in the years that have followed. Also notable for featuring the Winchester Model 1876 which is used by McQueen throughout the movie.

The following weapons were used in the film Tom Horn:

Actual Winchester Model 1876 used by Steve McQueen during the filming of the movie.Caliber is 45-75 WCF. Serial number is #22700 (Mfd.1882). Photo and information from Long Mountain Outfitters. 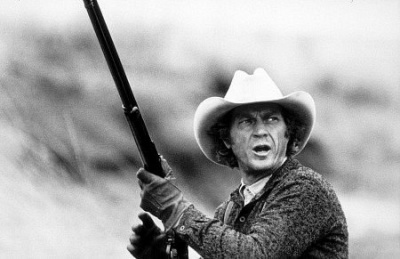 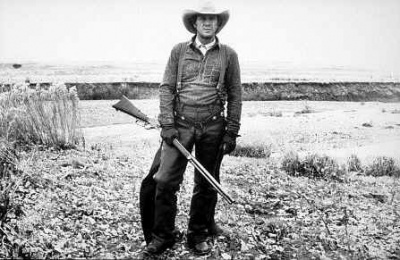 Steve McQueen as Tom Horn holding the Winchester Model 1876. Photo shows how large the 1876 is.

Closeup of the Winchester Model 1876 rifle's receiver as Horn loads the weapon.

Horn uses his rifle while tracking down suspected rustlers.

Not surprisingly, the Winchester Model 1892 is also used by different characters in the movie. Unlike many classic Hollywood westerns set during the 1860's and 1870's (which had characters using the 1892), the use of the 1892 is correct for the time period of the story.

The Winchester Model 1892 is the middle rifle on the gun rack.

A guard is armed with a Winchester Model 1892.

During Horn's trial, US soldiers carry the M1903 Springfield.

During Horn's trial, US soldiers carry the M1903 Springfield.

12 Gauge Double Barreled Shotguns are used by different characters throughout the movie. Horn uses one during the barn shootout.

Horn uses one during the barn shootout.

A gunman with his SAA on the left.

The gunman confronts Horn on the range with his SAA.

The Colt Walker on the table of Lee Mendenour (Roy Jenson).

The Smith & Wesson Schofield Model 3 also is seen in the film.

The Smith & Wesson Schofield Model 3 is used during the town shootout.