From Internet Movie Firearms Database - Guns in Movies, TV and Video Games
(Redirected from The Taking of Pelham One Two Three)
Jump to: navigation, search 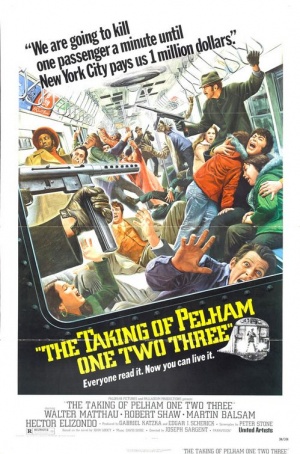 The Taking of Pelham One Two Three is a 1974 feature film adaptation of the best selling novel of the same name. The film stars Walter Matthau as a lieutenant in the New York Transit Authority who must negotiate with a team of hijackers who have commandeered a subway train designated as "Pelham 123". The film would subsequently be remade as a 1998 television film starring Edward James Olmos and Vincent D'Onofrio, and as a 2009 feature film starring Denzel Washington and directed by Tony Scott.

Mr. Green holds a Detective Special on the motorman.

Mr. Brown with a Detective Special held on the conductor.

A Detective Special is pulled from an ankle holster.

Reaching for the Detective Special after jumping from the train.

The revolver about to be fired.

Mr. Blue (Robert Shaw) draws a Star Model B when commandeering the subway train from the motorman, Denny Doyle, and when approaching the wounded undercover NYPD officer. This weapon alternates between the Star and a Browning Hi-Power, seen in both scenes.

blued Star Model B - 9mm pistol from the movie The Untouchables (1987). This one is a screen used and fired handgun in the movie and was used by Kevin Costner on screen.

Mr. Blue threatens the motorman. The external extractor helps identify the weapon as a Star Model B.

Mr. Blue points his Star Model B at the motorman.

Whenever Mr. Blue (Robert Shaw) fires his pistol in the film (shown as a Star Model B), it becomes a Browning Hi-Power.

Mr. Blue threatens the motorman inside his booth.

Mr. Blue holds his Browning Hi-Power on the motorman.

Mr. Blue fires his Browning Hi-Power during a shootout with the undercover cop.

High Standard Model 10B shotgun - 12 gauge. The Model 10B had a removable carry handle and bar to attach both a handle and a flashlight.

An NYPD officer runs past Inspector Daniels at the 28th Street subway station. An officer behind him holds a Winchester Model 1897.

Another officer with a High Standard Model 10 runs past Daniels.

An officer with a Winchester Model 1897 runs past Daniels and another officer.

An NYPD officer seen near Inspector Daniels at the 28th Street subway station has an Ithaca 37.

An officer behind Daniels and another officer holds an Ithaca 37.

The officer stands out of focus behind Daniels.

Mr. Blue loads his S&W M76 prior to announcing the subway takeover.

Mr. Brown unfolds the stock on his S&W M76 in front of the seated conductor.

Mr. Blue threatens the hostages, telling them that his weapon "fires 750 rounds of nine millimeter ammunition per minute".

Mr. Grey harasses a hostage as he holds his S&W M76 next to her.

Mr. Grey stands near a subway window with his S&W M76.

Mr. Grey threatens another passenger with his S&W M76.