theHunter (now known as theHunter Classic is a subscription-based hunting simulator which aims to incorporate realistic environments and actions in the world of hunting wild game and aims to simulate real world hunting styles with a myriad of different firearms all located on a fictional game reserve.

The following weapons appear in the video game The Hunter

The Browning Buckmark is featured in-game as the ".22 Grasshopper". The Buckmark was featured with the new addition of small game added to theHunter reserves such as Cottontail and European Rabbit in addition to being ethical to use against most birds. It holds a 10 round magazine and is compatible with a 2x20mm Pistol Scope. It fires .22 Long Rifle, 36 Grain High Velocity Bullets of which each box contains 50 rounds. 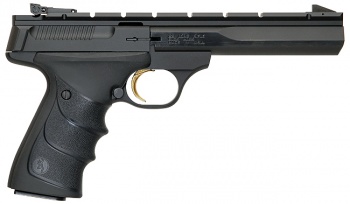 A Ruger Security Six is available in-game, called the ".357 Revolver (Black)". It appears to have a 6" barrel and classic wooden grips and appears to fire Nosler Brand .357 Magnum Hollow Point bullets. The player always reloads the weapon via speedloaders and operates it exclusively in single-action. It can also attach a 2x20mm Pistol Scope (in either a black or silver finish). A promotional variant dubbed the ".357 Revolver (First Lady)" is a heavily engraved version with pearl grips and appears to be coated in a nickel finish. It is merely a cosmetic variant and does not effect the stats of the original. 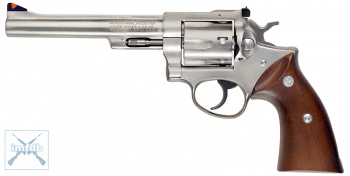 The Ruger Super Redhawk is called the ".44 Revolver (Silver)" in-game and acts as the next step up from the .357 Revolver. Like its smaller sibling, it too is always operated in single action, reloaded with speedloaders and can mount a 2x20mm Optical Scope.

The Smith & Wesson 629 is called the ".44 Custom" in-game and is based on the Performance Center line of the 629, specifically the Hunter model (rather appropriately). It is outfitted with a muzzle brake and 7" long barrel. It can mount additional optical sights in the form of a 2x20mm Pistol Scope (black or silver). It is considered merely a cosmetic upgrade and does not effect the stats of the original.

The Springfield Armory Omega is featured in-game as the "10mm Semi-Automatic Pistol". It has a flat mainspring housing, skeletonized trigger and hammer, and target-style rear sights. It holds a 9 round magazine and is compatible with a Red Dot Pistol Scope. When the sight is used, the rear sight is removed. It fires 10mm Auto Ammunition of which each box contains 20 rounds. 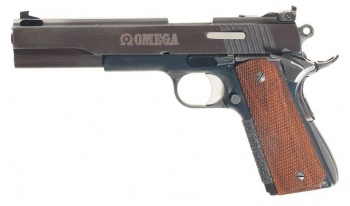 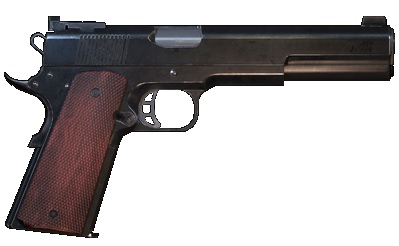 The Taurus Raging Bull, called ".454 Revolver (El Toro)" is featured in theHunter as the Big Game Revolver. Chambered in Nosler .454 Casull ammunition. Like other revolvers, it is exclusively operated in single-action, reloaded via speadloaders, and can mount a 2x20mm Pistol Scope. A cosmetic version called the "El Bisonte" appears with wooden grips and a ventilated rib on the barrel.

The Freedom Arms Model 83 is available in theHunter as the ".45 Long Colt Revolver" and is available in two cosmetic skins. It is identifiable by the styling of the barrel, cylinder arrangement, and grip. The "Stallion" features heavy engraving with a nickel finish and a pearl white ivory grip with "The Mule" appearing with classic wood grips and a stainless finish. Despite also being available in a .454 Casull chambering, the firearm only fires 5 rounds of MATU brand .45 Long Colt, 260 grain Jacketed Hollow Point rounds.

The Thompson Center Arms Contender is available in-game known as the "Rival" and "Highwayman". Both are chambered in .308 Nosler Partition 180gr Spitzer bullets loaded in custom Nosler Brass. The Contender is able to mount a 2-4x40mm Handgun Scope and is only 8% less powerful than the full size .308 Rifle. The "Highwayman" is a cosmetic variant and does not effect stats in any way.

Original render of the "Highwayman" variant.

A .22 caliber air rifle of a currently unknown make is available in theHunter and was released at fan request in response to the number of small game and the rising popularity of air rifle hunting. It is ethical for hunting small game such as rabbits, pheasants and ducks. It is capable of mounting a 3-9x32mm Air Rifle Scope and uses Odin Premium brand .22 caliber pellets.

A Mossberg 702 "Plinkster" is featured in theHunter as the ".22 Semi-Automatic Rifle, Plinkington" and was added in response to the number of small game added to the reserve. It is available in three cosmetic skins from Blue Marble, Winter Camo, and Classic Wood. It holds 10 rounds of MATU brand .22 Long Rifle, 36 grain high velocity hollow point rounds and is able to mount a variety of optics.

An unknown make of rifle, possibly even completely fictional, is available, chambered in .223 caliber, as the name may suggest. It holds 5 rounds of Nosler brand, 56 grain ballistic tip bullets and is available in two cosmetic skins, a green marble or classic wood, and is able to mount a variety of optical scopes. It is rated in-game for variety of varmint animals from Red Kangaroo, Red Deer and Coyote

Original render of the ".223 Bolt Action Rifle" in the Marble finish.

Original render of the ".223 Bolt Action Rifle" in Classic Wood.

The Bushmaster XM-15 Varminter was added into theHunter under the name ".223 Semi-Automatic Rifle" with a forest camo finish. It resembles many match grade AR-15-style rifles designed for varmint hunting and is outfitted with an extended match-grade barrel and holds 5 rounds of Nosler Brand, .223 caliber 56 Grain Ballistic Tip bullets. It comes equipped by default with flip-up iron sights and can mount a variety of optical scopes.

The Remington 700 is featured in-game in multiple variants chambered in .243 Winchester, .270 Winchester, and .300 Winchester Magnum. It is worth noting that all versions originally had slight differences in design to the real Remington 700, but the .243 version was subsequently changed to more closely resemble the real thing (see below). All variants seemingly fire a single shot and do not take into account the internal magazine. This is likely because of the old phrase "a good hunter does not need more than one shot to kill his prey" and is likely done as tradition. All variants are capable of mounting an array of optical scopes.

Note: The .243 rifle was changed in a December 2016 update to much more closely resemble a real Remington 700, while the .270 and .300 versions retain their original appearance. 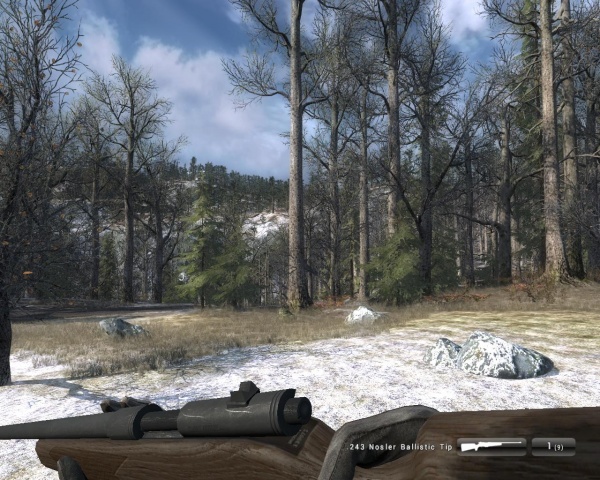 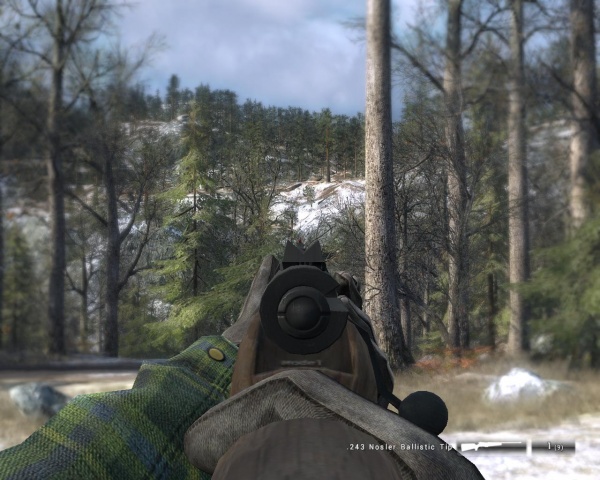 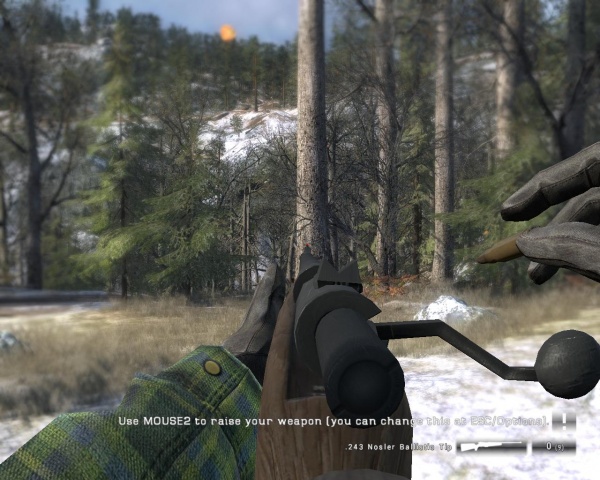 After firing a single round, the player's hunter prepares to load a single fresh cartridge into the rifle. 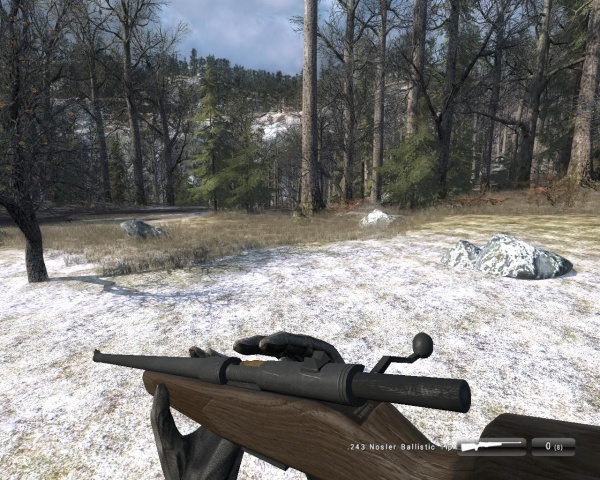 The .270 variant comes in three cosmetic variants, dubbed Classic, Composite and Grey Wolf. The Classic variant features a blued barrel with a wooden body and stock, Composite incorporates an OD green composite stock with what appears to be a chrome or stainless steel barrel. The Grey Wolf variant features a uniquely designed wooden body and stock with plaque engraving on the body. All three variants are cosmetic and fire Nosler Brand, .270 caliber 130 grain ballistic ammunition.

The .300 variant comes in three cosmetic variants, Composite, Carbon, and Winter Camo. It is the larger and more powerful caliber rifle available to players and is designed primarily for hunting big game. Composite is described as having a composite stock, sculpted cheek piece, and a cold hammer forged barrel. Carbon swaps the composite stock for a wooden stock and winter camo is simply the Composite variant with a winter camo finish. All three variants fire Nosler brand, Nosler Accubond .300 Magnum, 200 grain spitzer ammunition. 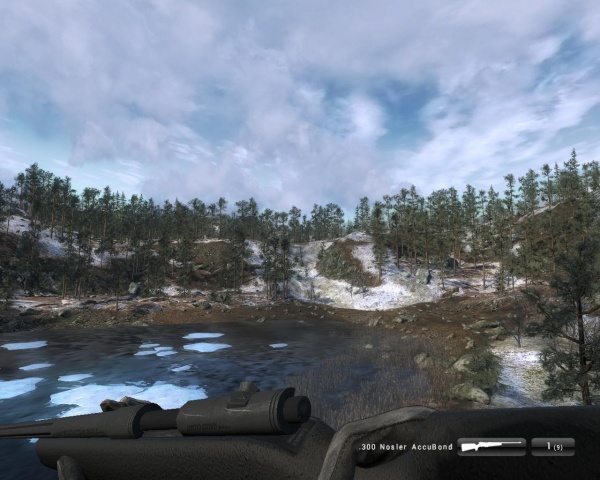 The player's hunter holds the ".300 Bolt Action Rifle" while overlooking an icy pond. 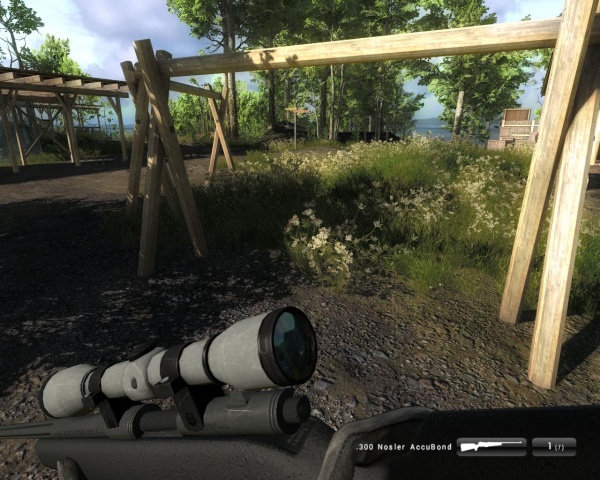 In a warmer locale, the hunter holds a scoped .300 Bolt Action Rifle. 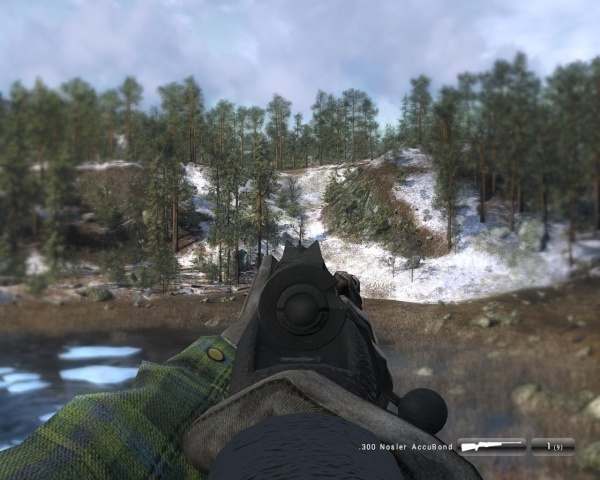 Aiming the ".300 Bolt Action Rifle", exactly the same as its other variants. 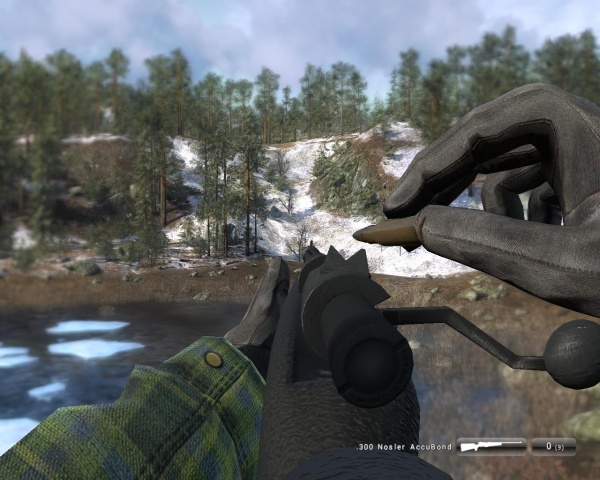 Like its siblings, the .300 Bolt Action Rifle is reloaded after a single round is fired. 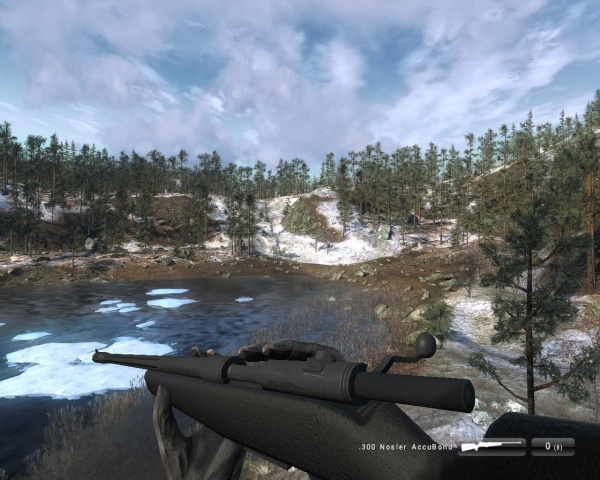 The Blaser R8 is featured in-game, chambered in the 6.5x55mm Swedish Mauser Cartridge. It holds 5 rounds and is can be fitted with either a custom Blaser optical scope or a Aimpoint Micro H-1 Sight.

The Steyr Mannlicher-Schoenauer appears as the ".30-06 Stutzen Bolt Action Rifle".

Springfield M1903 in a Mannlicher Schönauer Carbine stock - .30-06. This is the screen used rifle (and sling) carried and used by Don Johnson in the movie A Boy and His Dog.

Two types of the O/U Break Action Rifles appears in the game, chambered in .30 R and 9.3x74R ammo.

A Short Magazine Lee-Enfield is featured in-game chambered in .303 British. It is the No.1 Mk.III Variant.

The Mosin Nagant is featured in-game as the "7.62x54R Bolt Action Rifle".

The Mossberg 930 appears as the "20 Gauge Semi-Automatic".

The Single Barreled Shotgun appears as the "12 Gauge Single Shot".

Original render of the Blaser F3.

The hybridized Remington 870 appears as the "12 GA Pump Action Shotgun". It has a 5-round magazine tube from the Mossberg 500 (the Remington 870 has a factory extended magazine, but only in the 7-round version), and trigger guard from theWinchester Model 1200/1300. It also featured in the "Gold" and "Primal" variants, the latter has a short barrel and black synthetic furniture.

The 12 Gauge Double Barreled Shotgun appears as the "12 GA Side By Side Shotgun".

Original render of the "12 GA Side By Side Shotgun".

Original render of the "12 GA Side By Side Shotgun Premium".

The 16 Gauge Double Barreled Shotgun appears as the "16 GA Side By Side Shotgun".

J. Stevens and Company Side by Side Shotgun with exposed hammers - 12 gauge, resemble the in-game "16 GA Side By Side Shotgun".

The Winchester Model 1887 appears as the "10 GA Lever Action Shotgun".

A muzzleloader which bears resemblance to a Thompson Center muzzleloader is featured in-game as the ".50 Inline Muzzleloader". It can seemingly fire either .50 Conical Bullets or .45 Saboted Bullets.

Original render of the Recurve Bow.