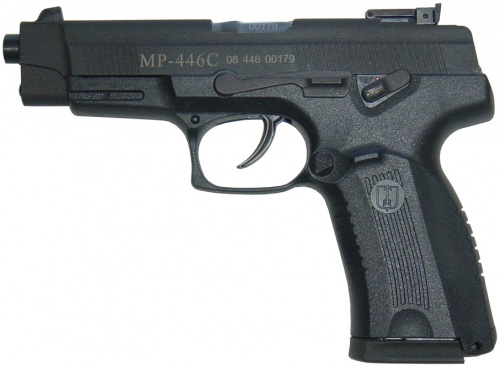 Cartridge 9 x 18 is not suitable for military use, it's long been understood in Russia. PYa designed specifically for use by 9 x 19. Moreover, this cartridge with increased powder charge. This gun is gradually replacing the Army Makarov pistol (only in 2012 started mass production for Army). I once fired from this gun (it was a civil version of PYa - MP-446 Viking with polymer frame). I did not like. The feelings it looks like a brick with the trigger. Also I heard that the army and police are dissatisfied with this gun, and we have (in Russia) to build a plant the company Beretta. So perhaps that will soon be replaced by Yarygin PYa. Instead the Russian army will receive a Beretta pistol, but is not yet clear which one. Maybe this will be a model 92FS. I apologize for my bad English. Flexo 22:51, 6 March 2011 (MSK)

Excuse me, what have you never heard of? About Russia? Oh, you have not lost much. This is a huge ice desert. There are evil Communists drink vodka straight from the teapot, and drunk bears go along the streets. All Russian people are members of the mafia. At the same time they are working for the KGB. There are only three last names in Russia : Pushkin, Gogol and Drago. And the first name is only one (for both men and women) - Ivan. KGB agents still hate America and they dream to occupy it and force Americans to pray on the posters of Lenin. Besides that, Russia has many nuclear bombs. That's all, probably… The rest can be seen, for example, in the new American movie Red Dawn 2. Good luck. Flexo 22:51, 6 March 2011 (MSK)