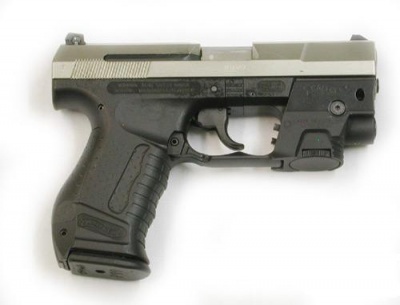 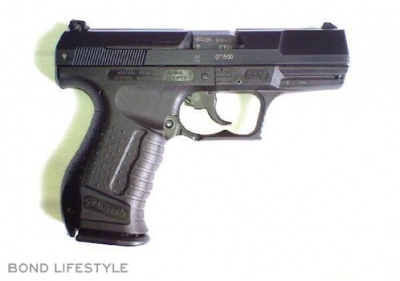 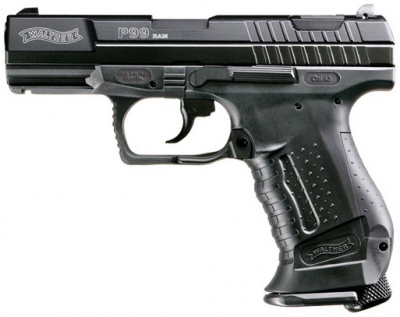 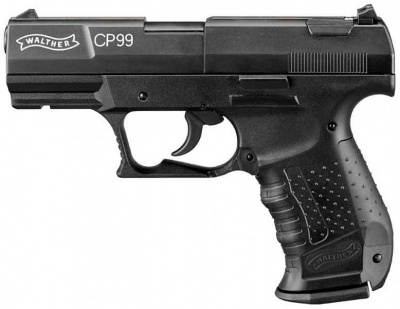 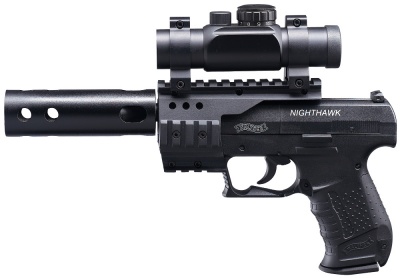 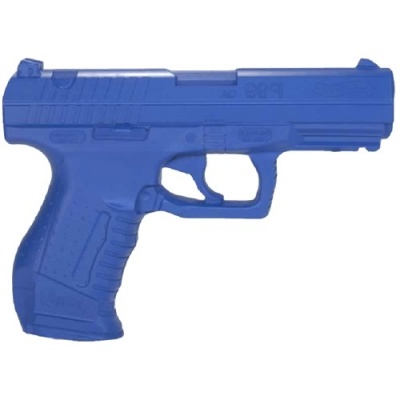 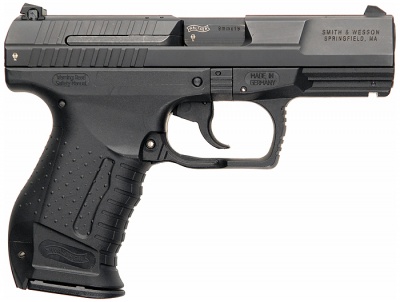 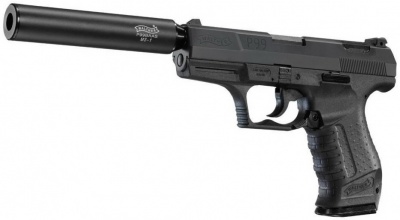 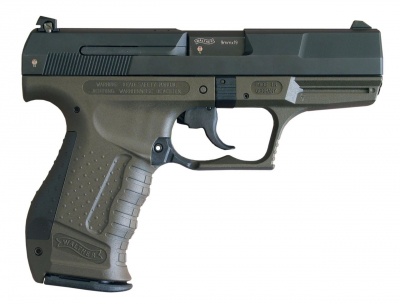 It's a pretty decent gun. Nice to hold, cool looking, and accurate. It's a bit heavy for a gun of it's size. I'd recomend this for your handgun collection. Here is a list of all semi-auto handguns I'd recomend.

All of these are must haves

Who wrote this? VP70, FiveseveN and Glock 18 are military issue only. The full auto and brust pistols are illegal for the commercial market and the FiveseveN and VP70 are no longer in production. I think some little COD fan is trying to make smart with the people who actually know their shit. The P99 weighs just over 600 grams making itabiut as heavy as a glock and lighter in weight than a 92F, M1911 and most other non polymer bodied pistols on the market. Fucking Noob! --Captain Snikt 02:31, 14 March 2010 (UTC)

You're wrong about the VP70. It's not military issue only. I have one (and owned it since the early 1980s) I have everything on that list except the Glock 18, the USP Expert and the 4506. Personally I don't see the allure of having everything, except it's fun to mess around when you're bored. I'd still take the Glock into a gun fight before all others, unless there are specific requirements that other models will have and advantage with. Also, the VP70 is the LOWEST ranked gun on that list. I DON'T recommend it.  :)

Actually I'm pretty sure the FiveseveN is still being manufactured and can be purchased although it is rather expensive not to mention 5.7mm ammo is also expensive as hell and is available to civilians. I don't know of any military that uses the Glock 18. --129.89.187.78 03:09, 14 March 2010 (UTC) (ThePotShot)

Okay you " captain snikt " need to stop making yourself feel better by putting other people down the FiveseveN is for sale for civi's so obviously your not the expert here either ...--Blueboy1600 21:57, 21 August 2012 (CDT)

Since James Bond has went back to using his old Walther PPk in Quantum of Solace, do you think he should have sticked to his old gun that whole time or use the Walther P99??? (Please note that this is just a matter of opinions.) I think the P99 is something nice to be changed, 7 rounds of .32 .vs 15 of 9mm, you do the math. --FIVETWOSEVEN 03:52, 13 March 2010 (UTC)

I never thought this switch to the P99 made sense, other than some marketing for Walther. He's a secret agent, it'd make sense for him to carry a weapon designed to be concealable. I can understand if he went for something bigger on some missions, like the dam mission at the beginning of Goldeneye, but overall I'm glad he's back with the PPK. If the producers want to appease Walther, I'd be okay with him switching over to a PPS or something. --Funkychinaman 06:40, 13 March 2010 (UTC)

I agree with Funkychinaman that Bond should carry the Walter PPK every where because is concealable. on mission he carry's a wonder 9 handgun, and his PPK as aback up handgun.

I'd like to see him equipped with both, PPK for concealed carry and P99 for when he needs extra firepower and concealing his weapon isn't an issue. I don't really like the trigger guards on the post-2004 models though.

Yeah same here.. i don't like the new ( post 2004 )trigger guard. They should of released the newer models with the same trigger guard as the Generation 1. It changed the look of the P99 too much.

Agreed as well. I love the look of the Gen 1 P99, and while the later models are still very nice looking pistols, the change in trigger guard is definitely a negative. Didn't stop me from getting one, though. DKS01 23:50, 14 December 2011 (CST)

I believe it was in the novel "Doctor No" where he switched over to the PPK, he was also issued a customized S&W .38. The PPK was for discreet concealed carry, and the S&W was for more serious,heavy work. In the movie "Goldfinger", on the raid on Goldfinger's factory, Bond used a Walther P38. David.

:The only thing about the PPK is that it's strongest available caliber is .380 ACP, and it only has a 7-round capacity. Just going off of the kind of trouble that Bond usually gets into, that's not a gun I'd feel comfortable with. The PPS in 9mm or .40 would make more sense, and indeed, I found myself watching Quantum of Solace initially wondering why he'd regressed back to the PPK. As far as the P99's concealibility (sp?), compared to some other full-size guns, it's quite concealable, given the amount of firepower it can hold. For something requiring deep concealment, though, use a PPS. --Clutch 03:34, 13 November 2010 (UTC)

Some versions of the P99 are DA/SA, so do they have a decocker or does the weapon have to be dry-fired to return to DA trigger. -Anonymous

I'm reading here and there that the Montreal police (SPVM) is using P99QAs.

Does anyone know if it is possible to interchange the slide/frame between a pre 2004 P99 and one of the post 2004 models like the P99 AS? I as because a gun has come up in Defiance (see here for pics) which appears to have a pre 2004 .40 S&W slide (half height serrations, no groove running along it and doesn't narrow at the front) with a post 2004 frame (no ramp inside the trigger guard, trigger guard isn't hooked and it has a standard rail, but it has the short mag release which was the case on the first of the 2nd gen guns). Anyone know if this is feasible, or is it some kind of inaccurate replica? --commando552 (talk) 18:29, 21 May 2013 (EDT)

Pretty sure they can be. Nothing about the action or setup of the slide to the frame of the pistol appears to have changed between the 1st, 2nd and 3rd generations. --DeltaOne (talk) 05:25, 4 December 2013 (EST)

I have an Umarex licensed P99 airsoft gun, and I'm trying to figure out what version it's based on (because I really like the P99, and if it's reasonably priced wouldn't mind having one). The mag release on the basic P99 is just this gimpy little thing (it's why I don't like the USP; I hate that stupid mag release). Mine's stretches almost to the trigger. I'm thinking it's gotta be either the QA or AS, but I'm honestly not sure which (and being an airsoft gun it's probably a Frankengun of several different P99s; I know it has no decocker for instance). Would you honestly recommend the P99 as a handgun? I'm at a loss between it and either the M9 or the Beretta 96F (so my other question is 9mm or .40; I liked either caliber and both are fairly easy to get in my area). What do you think? --That's the Way It's Done (talk) 20:17, 24 September 2014 (EDT)

I've shot a few matches with my buddy's P99AS several times, and the mag release, which stretches about half the length of the trigger guard, takes some getting used it. You can't really use it with your thumb, I eventually just started using the mag release on the right side with my middle finger. As for comparisons with the Beretta, this is probably a bit lighter, being half plastic, and I suppose it'll come down to whether you prefer DA/SA or DAO. --Funkychinaman (talk) 14:12, 1 October 2014 (EDT)

That's about what I figured. With my springer I just use my right middle finger to reload (for me that's a little bit more natural than the positioning of the standard P99 and USP's mag releases). I figured the Beretta would weigh more, but I imagine that also has a bit more reliability as well. I've never actually seen any P99 for sale before; are they as absurdly expensive as Browning Hi Powers, or are they priced more like Berettas?--That's the Way It's Done (talk) 17:58, 1 October 2014 (EDT)

I think my buddy paid $600 for it brand new at a gun show a few years back. I actually don't think you're supposed to use your thumb to release the mag, since you almost have to turn the gun (and muzzle) ninety degrees inward to use it. I probably would not have gotten one myself. It was his first handgun ever, and I thought it was a poor choice for him. --Funkychinaman (talk) 18:12, 1 October 2014 (EDT)
$600's not too bad. My gas blowback handgun's an M9, so I'm a bit more familiar with that series's ins and outs; I'll do some more thinking, though. Thanks for the insight.--That's the Way It's Done (talk) 18:21, 1 October 2014 (EDT)

If your airsoft gun doesn't have a decocker, this means that technically it is based on the P99 DAO (we do not have a pic of one of these but it is exactly the same as the AS or QA with the decocker deleted and the slide not having the corresponding hole). With the post 2004 models there are also at least three variations that Walther had, the first having the short mag release, then next having the extended mag release, and the third having the extended mag release and a longer, ambidextrous slide release. People sometimes refer to these by the generation 2, 2.5 and 3 respectively, but i don not think this is necessarily true as I think the 2.5 and 3 are mode concurrently, with the 3 being a special model called the "Defence Kit" or something similar (this is what our 9mm AS picture is while the rest are the standard model with the normal slide stop). To top it off, i believe the ths slides/frames of the pre and post 2004 models can be interchanged, so I think that even a frankengun airsoft pistol could probably still be based on a "real" gun. --commando552 (talk) 20:03, 1 October 2014 (EDT)

Interesting. I'm kind of surprised it's not based on the CP99 (not that I'm glad it isn't; once my buddy and I figured out how to work the stupid mag release it's become my second favorite handgun, and the one I used the most after my gas M9 [mostly when that gun is down for repairs]).--That's the Way It's Done (talk) 20:53, 1 October 2014 (EDT)

No really, why hasn't PPQ been featured in more movies?

Like the article mentions that PPQ has only been featured in f---ing Die Hard 5 and handled by 50 Cent in that one movie. Like seriously? Everybody loves this gun! But it seems to have pretty lousy representation in movies. Are you guys just failing to update the PPQ appearances or are the movie makers just effin' up here? TrickShotFinn (talk) 11:40, 26 March 2018 (EDT)

It probably hasn't helped that Bond went back to carrying a PPK in the more recent films instead of picking up the PPQ. Don't know why Walther didn't choose to market the pistol that way, as they did with the P99.--AgentGumby (talk) 13:26, 26 March 2018 (EDT)

The simple reason that the PPQ is unpopular in movies, is that it is unpopular in real life. I'm not saying it is a bad gun, but it has never sold well for one reason or another. Movie armourers tend to buy guns that are either popular or good looking, and the PPQ is neither. --commando552 (talk) 12:37, 27 March 2018 (EDT)