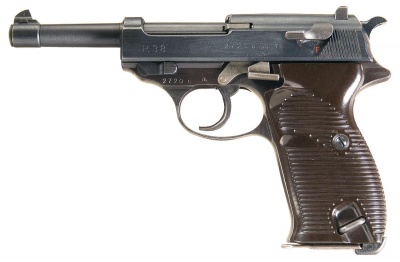 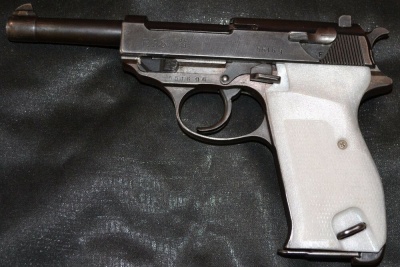 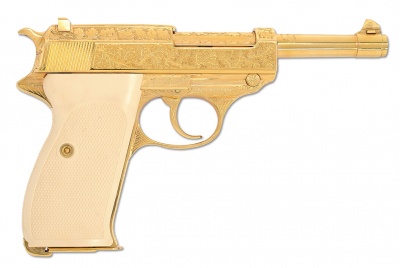 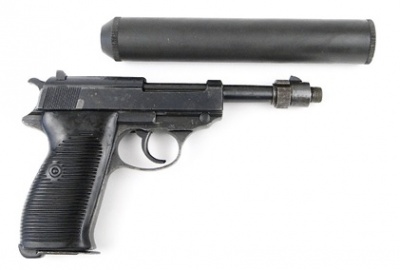 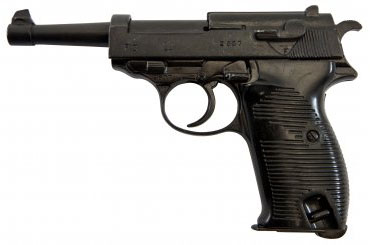 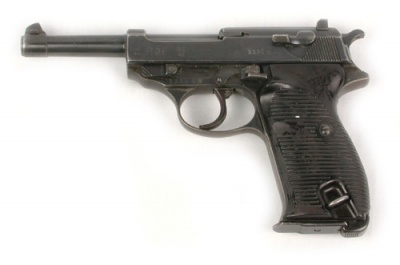 Walther P38 - 9x19mm used by Frank Sinatra and Laurence Harvey in the film The Manchurian Candidate. Photo courtesy of the Long Mountain Outfitters. 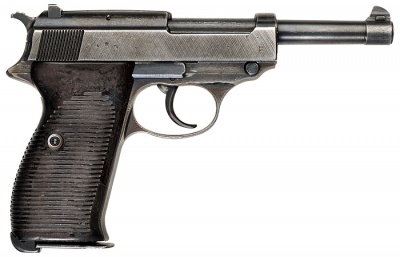 Walther P38 - 9x19mm. This is the actual screen used pistol carried and fired by Scorpio Killer (Andrew Robinson) in Dirty Harry. Visible are machining marks and bluing flaws that can be seen clearly in the film, validating that it is the same pistol.

Splashinator Water Pistol is a Chinese-manufactured (by PMS) plastic water pistols modeled (with a certain attention to details) after Walther P38 which is available in various color schemes (and can possibly even be re-painted to achieve a rough prop standing for P38). The most known version is a yellow one with blue grips (some sources state that the version used was originally with orange grips re-painted by crew) which was used in the cult British TV series Doctor Who and therefore became valuable and recognizable to fans and collectors of memorabilia. 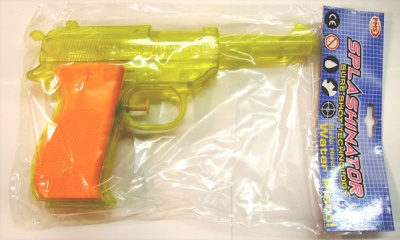 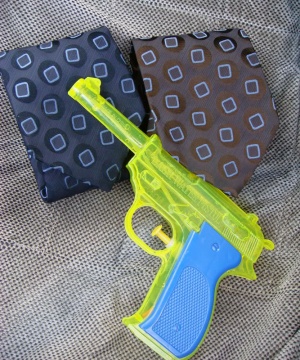 Is there any film/game that features the P1 (instead of the P38)?

It's virtually impossible to tell the two apart just by looking at them, since the main difference is just the material the frame is made of. So I wouldn't doubt that some are P1s, depending on where the show was filmed. I think a few P4s might have been used, which have a slightly shorter barrel. But it's hard to tell for sure, since it's not that big of a difference. Again this would depend on where it was filmed. As far as games go, all games using the P38 style pistol are WWII games, so they'd be P38s by default. And I don't think anyones going to make a 1960-70s first person shooter about germany, that the Vietnam War era. --Zurak 47 10:05, 25 August 2009 (UTC)

The game No One Lives Forever takes place in the late '60s, some of its levels are set in East Germany and the P38 is used throughout, it appears to be a standard one with wood grips though. --MattyDienhoff 10:08, 3 July 2010 (UTC)

But the real Walther HP (The real name of the Walther P-38 had P-1 style grips. So in Das Boot that can correctly be a Pre WW2 HP. Sabbathmusic