Viktor (Bill Nighy) uses a long sword to finish off Raze (Kevin Grevioux) in werewolf form; after Viktor drops the sword in battle with Michael (Scott Speedman), Selene (Kate Beckinsale) takes it up.

Selene looks over at the long sword on the ground.

Selene armed with the sword.

Close up on the sword in Selene's hand.

Without his sword, Viktor (Bill Nighy) whips out two immense fighting knives during the final battle.

Lucian (Michael Sheen) uses a blade that extends from his sleeve in an attempt to stop Selene (Kate Beckinsale) and Michael (Scott Speedman) as he pursues them. He later distracts Kraven (Shane Brolly) by stabbing him in the leg with it.

Lucian extends his arm blade. That seems rather cumbersome to wear comfortabley on a regular basis.

Four shuriken blades in flight as Selene throws them at Raze.

The bloody shurikens as they are extracted from Raze's chest.

The pistol grip on the M16 appears to be lacking the finger notch which is on the A2 but not on the A1. It is difficult to be certain from the picture. This could be an A1 with A2-style handguards. Does anyone know for certain?

That's not an M16A2. The upper seems to have no forward assist, so that means it's an M16A1 upper. The lower is an SP1-style lower. It's just like this gun:

In reality, they aren't, but in the opening scene, after Seline tosses her Beretta's for her P99's, she fires a few times, then they cut to a different character, cut back to Selene and she's firing them as if they were fully automatic. Kornflakes89 23:01, 23 April 2011 (CDT)

Additionally, are the compensators attached to Selene's Beretta 92FS are real world compensator or were the designed specifically for the film? 29 June 2009 (UTC)

dose Selene had two Beretta 92FS, two P99s, and a USP conpact on her at all times?

I don't think so. It's been awhile since I've seen the movie, but IIRC, she carried the Berettas for the first part of the movie, then switched to the Walthers once they started using the silver nitrate rounds. And she never used the USP in combat, she only used it at the mansion firing range, which being part of the mansion armory, has multiple weapons available. Guessing she just picked it up "in house" for her target shooting, it doesn't appear to be anything she carries with her regularly. DKS01 05:30, 26 April 2010 (UTC)

Selene's Berettas do not seem to have real compensators like in Evolution, but more like covers for the extended barrels. There are no ports on top of the "covers" and the still showing Selene firing, only muzzle flash is seen and no flash upwards as with a normal compensator.

Also, she does use the P99s in combat, in the end when the vampires attack the lycan hideout. You can clearly see them when she jumps down the tunnel, and when she does a forward flip while shooting a lycan. --Jan 23:43, 1 July 2010 (UTC)

Would it be possible to convert a Beretta 92FS to fire 3 round burst rather than full auto? I ask as I saw this movie the other today, and it seemed as if Selene was firing consistent 3 round bursts, and she seemed to be repeatedly "clicking" the triggers rather than holding them. Can you "drop in" a component from the 93R to do this, or is it not that simple? --commando552 20:21, 8 August 2011 (CDT)

I agree. You can just about make out the unfolded forward grip at the top, along with the long slanted compensator. --commando552 11:49, 8 October 2011 (CDT) 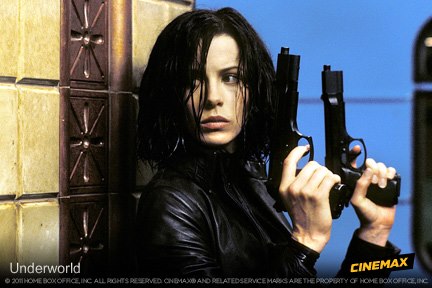 This is an image from a recent Cinemax plug for Underworld on Facebook. I was admiring the Berettas when suddenly, I noticed that the hammers were to the rear....but the triggers were still in double-action. Any explanation for this phenomenon? --ZeoRanger5 (talk) 15:31, 20 September 2012 (EDT)