Photoshopped M1928A1 Thompson with 30-round magazine and a side-folding stock (Similar to the M1 Carbine) - .45 ACP 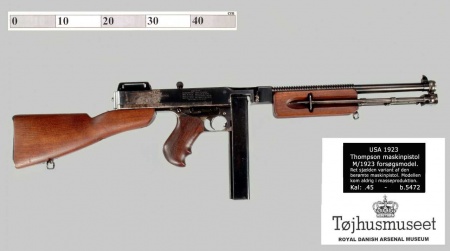 Screen Used M1928 Thompson - .45 ACP. This is a hero gun held and used by Nicolas Cage in Windtalkers.

M1928A1 Thompson converted to use MP40 magazines with 7.62x25mm blank cartridges. In the older times, armorers had trouble getting .45 ACP blanks to cycle in guns, so more reliable blank ammo was substituted whenever possible. Such movie props were widely used in Soviet movies of 1970s-90s.

A Scope on a Thompson submachine gun? 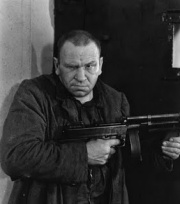 This is from the MGM film 'The Big House'. Has anyone ever seen a Thompson with this kind of scope in real life? Does anyone know anything about them? I've only seen it in the one filmFoofbun 11:10, 15 March 2010 (UTC)

A scope on a Tommy gun sub machine gun seem impractical back then.

How come the military do not use the drum magazine that much? Isn't a large 50 round clip good?

First off its MAGAZINE not clip. Secondly there is a very good reason why Thompson owners prefer the 20 and 30 round stick MAGAZINES to the 50 or 100 round drum MAGAZINES. The Thompson Submachinegun is frigging heavy at nearly ten pounds of wood and steel. This means that while it is a good submachinegun people don'tr like to have to carry all those drums around. Plus the drums are less than reliable compaired to the stick magazines.Rockwolf66 04:27, 1 April 2010 (UTC)

Those fifty and one hundred round drum magazines are also a real bear to load up and they're noisy if you need to be moving silently. The British found that out in the earl days of World War Two. All those cartridges have a tendency to move around and slap against the container. Oh and did I mention that with those drug mags reloading is a real chore. You really need a third hand to change them out. The stick mags are faster. Much faster. Watch Public Enemies.Almost none of those guys use the drum mags. Only the stick mags. Which I understand was historically correct. --Jcordell 04:48, 1 April 2010 (UTC)

You do need a third hand to swap out a drum on a modern semi-auto Thompson unless you have a tool to trip the bolt-open catch normally tripped by the box magazine follower when empty. The full auto 1921, 1928 and semi auto 1927 fire from the open bolt, and once you recock the bolt after the drum runs dry, it takes *only* two hands to change out drum on the original Thompson (still is not easy). --Carl N. Brown 08:03, 4 September 2012 (CDT)

The drum mags weren't very reliable. Turns out drum mags don't work too well. The design is just too complex to be practical and that's the reason you don't see much drum mags on SMGs and rifles. Plus after you loaded the Thompson's drum, you had to wind the bastard and it would come unspung and it wouldn't feed properly. Hughjefender

it look like the just use the drum in the start of attacks. once that dry, the use stick mags.

That's like how the Soviets used to handle mags with the PPSh, one drum mag, and then all box mags. And while we're here, is the guy in the photo Curly from the Three Stooges? --Funkychinaman 06:18, 1 April 2010 (UTC)

That 'scoped gun could be one of the original Model 1927 semi-auto only Thompsons. They were just a Model 1921 with a plug instead of a selector switch but some police forces did not want to issue full-auto. 50 shot semi-auto with a scope from a prison guard tower makes sense as a riot control weapon; still could be just the result of a prop gun with too much time on his hands. --Carl N. Brown 08:03, 4 September 2012 (CDT)

I'm not saying it would ever be practical for a scope to be mounted on a Thompson, but it might be a slightly better idea to slap one on the Thompson M1A1. considering it has a lower firing rate than the "original" 1917 Thompson, and (in theory) a bit easier to control.

When SWAT was introduced did they ever used this gun or did they prefer the M3 "Grease" Gun?

Does anyone know how to find the difference between both models? I couldn't find much differences in the two models. - Kenny99 09:40, 12 September 2011 (CDT)

Take a look at the two pictures, if you find any significant difference then write it below. User:Vlad M 15:15 April 17 2015.

The Thompson is a popular subject in western animation. Its association with WWII and frequent appearance in gangster movies makes it a very familiar firearm to most viewers. Its simple shape can be achieved with a minimum amount of geometric detail and color. The site doesn't allow pages for western animation unless they meet the detail requirements, but I doubt anyone hasn't seen a cartoon at some point in their life that didn't include the Thompson.--MrMiracle (talk) 21:48, 5 May 2013 (EDT)

Hey guys, I wonder if the Cutts compensator was effectively.I mean , I know that one of the Thompson's major problems was the recoil. The continuous rapid fire and ejecting shells were lifting the barrel.I think that's one of the reasons why they fitted the M1921AC and the M1928 models with compensators.But, I don'tthink they were effective.Maybe in semi auto it was,but in full auto....Anyway,don't get me wrong,the compensator HAS a decorative role.I mean , a Thompson without a finned barrel and a compensator(M1A1) is ,in my opinion, a verry ugly weapon. User:Vlad M (User talk:Vlad M) 13:31, 17 August 2015 (EDT)

Late response. The original Model 1921 did not have a compensator; the compensator was added with the Model 1921AC and became standard with the Military issue Model 1928 and 1928A1. The compensators were slightly helpful in countering recoil in full auto fire. However, the recoil of .45 pistol ammo from a 12 pound two-handed shoulder-braced gun is not so great. Many users found ways to control the Tommy gun without the compensator even when firing bursts longer than three or four rounds. In semi-auto fire it was not necessary. Most Thompsons produced by the end of WWII did away with the compensator, first as a cost cutting measure, second because it was not that big a help, and third because it directed gases up in your line of sight obscuring the target. (Smokeless powder is actual less smoke powder.) (The Uppers and Lowers of all the military .45 Thompson models were intended to be interchangeable and barrels both with and without the compensator could be found in spare parts inventory, especially in the field where weapons were recovered after battles to be inspected, rebuilt, or cannibalized for spare parts.) -- Carl N. Brown (talk) 13:19, 28 November 2018 (EST)

I have noticed a well used piece of old stock footage, close up front view of a Thompson blazing away with what appears to be a square compensator; that matches descriptions I have read of a Thompson blank firing adapter. --Carl N. Brown (talk) 12:22, 22 September 2021 (EDT)

I don't like how IMFDB discourages additional reading and really doesn't like adding sources (and straight-up deleting them when somebody finds one), so here's the additional reading for M1919 Thompson.
[1] --Wuzh (talk) 14:32, 1 December 2018 (EST)