Talk:Terminator 3: Rise of the Machines 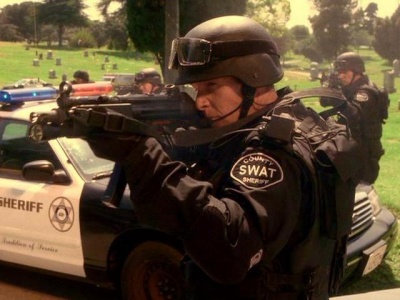 The SWAT leader (Matt Gerald) fires his MP5A2 at the Terminator 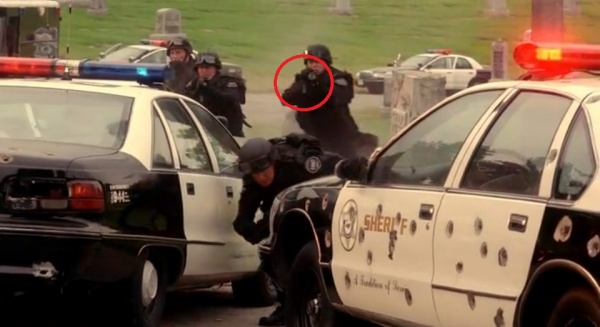 A SWAT officer pops out from behind a police car with an M4A1 carbine in hand. You can tell it apart from the MP5A2s, because it has a larger weaponlight and it's placed at an angle and not on the bottom. I circled it to show you where it is.

The Terminator fires the H&K G36K at a mini HK-Aerial. 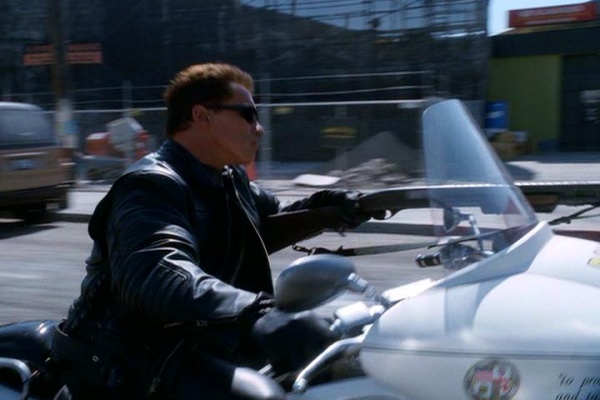 The Terminator fires a Remington 870 fitted with a heat shield and custom foregrip from an L.A.P.D. motorcycle during the car chase scene.

The guy on the right holding the M4, note the flashlight hanging from the lower left side of the foregrip, instead of sitting on the top right where it should be.

The integral flashlight and forearm can be mounted anyway you want. I've mounted them low (instead of high) myself because I thought the flashlight obstructed my field of view. The handguards can be flipped so that the light can be either high and to the right or low and to the left. It's up to the preference of the user. People have used them both ways. MoviePropMaster2008 16:35, 12 October 2009 (UTC)

The weapons on the T-1 robots are not Miniguns. They are prop weapons that use CGI muzzle flashes. The gun itself looks nothing like a Minigun is considerably larger. According to the novelization these weapons fire .50BMG rounds.

Novelizations of films count for exactly nothing about a movies page.Usually a novelization is vastly different than a film. The people writing the literary version of a film know even less about the firearms acctually used in a film than the director.The Miniguns are mock ups but they are representing Miniguns. They are too small to be GAU-19s.Rockwolf66 07:30, 6 August 2009 (UTC)

I didn't say they were GAU-19s. Not every gun in a movie necessarily has a real life counterpart or is event supposed to be representing a real weapon. What I said was that these were prop weapons that are larger than Miniguns and have a dissimilar structure from Miniguns and according to canon they fire .50BMG rounds. Obviously the scene pays a homage to T2, but they aren't actual Miniguns, and if they are intended to be, then Stan did a pretty poor job of mocking them up, because at a casual glance it is apparent that they are not M134s.

According to what canon? The novelization? That's not canon with the movies so you can just shove that in the toilet. Example, in the novelization of Batman(1989) Bruce dresses up as Batman in broad daylight, which he NEVER does in the movie, the novelization doesn't count for shit when identifying something in the movie.Kornflakes89 03:52, 10 May 2012 (CDT)

Yeah I have to agree, because these weapons are to big to be the GE M134 or Dillon Aero. And plus, their rate of fire is much slower than a real minigun. In reality, a minigun would sound like a chainsaw and these gatling guns sound like SMGs to me.--Gunnerboy (talk) 14:11, 16 February 2013 (EST)

Rate-of-fire's got nothing to do with it, movies often reduce the rate-of-fire on rotary-barrel weapons so that you can actually see the barrels spinning on screen. Dropping the rate of fire and/or adding an inappropriate sound effect doesn't stop a weapon being a genuine GE M134 (although obviously these ones in T3 are not).--Leigh Burne (talk) 04:37, 18 February 2013 (EST)

The Shotgun while on Motorcycle

Motorcycles are designed to stay straight as long as you are balancing it. I personally adjust my helmat, shirt, etc while riding at 40 mph. I can see Arnie pumping another round while riding no problem. -The Winchester

We are seeing more obnoxious commentary from noobs on pages that alot of veteran IMFDB members and mods have worked on. Though we encourage active participation by new members, being obnoxious or WRONG is not encouraged. One can be sarcastic only if the 'goof' is so obvious that everyone's eyes will be rolling. But we are getting a lot of nasty comments about trivial things, and that creates an atmosphere of negativity that is not good for IMFDB. Just my 2 cents.  :) MoviePropMaster2008 05:48, 20 September 2009 (UTC)

I apologize for my comment, it was one of my first posts and was I told not to post on the page itself, but rather the talk page instead, by several other peole on different pages and have since stopped. I probably should have erased my post from this page, sorry. But I don't think my comment was 'nasty' or 'wrong'. It really only has 3 AKM parts were added to it, the front sight block, pistol grip and reciever cover(the gas port block is debatable, some chinese guns have the akm bayonet mount, but most didn't). Judging from the pistol grip and top cover, I'd assume that the parts came from an egyptian maadi(given that the gun was used in some older films, the maadi is the mostly likely canidate, Hungarian top cover is a little too short to fit properly and has a different pistol grip, and romanian guns had only just started to be imported and had thumbhole stocks) As far as gunsmithing goes, they shortened the barrel, gas tube, gas piston and drilled a new hole for the gas port. That's not really that big, since it's a blank gun(live fire would be inaccurate since you'd most likely mess up the rifiling). I am of course assuming that the gas block is chinese, if it too was egytian they would have had to remove the barrel from the trution block and likely need to add shims for the maadi barrel to fit. which would be a royal pain in the ass getting everything lined up properly. when I think of a heavily customized AK, I think the folding saiga shotgun that was used in Firefly(I forget what movie it was originally made for at the moment). Maybe my idea of 'heavly customized' is too different from your idea. And I cannot figure out why they felt the need to mix and match parts. Is the AKM front sight more sinister looking? Thats the drawn out and hopefully more polite version of my critique of the weapon. I have built several AKs and while yes, the dimensions are not idetical from country to country, the AK isn't a precision instrument and most parts can be made to fit on another with little effort. PS pleasedon't ban me. Zurak-47

How was it determined to be a Glock 36?

From the page: For some reason, the grenades don't explode on impact with the T-X, possibly due to her abilities she disabled the grenades' impacts - They are most likely phosphorus grenade rounds, used commonly for well armored targets.

She can't affect anything without putting her control program in and you can't do that in the microsecond between impact and detonation. Second, white phosphorous, in case you didn't know, sends burning white particles all over the place. In the CRS facility, that would have cause serious fires near-instantly as particles burning at several thousand degrees went all over the room. Wille pete is not used for well-armored targets, it might burn through eventually, bu unless you get the WP near a vent and fill the target with smoke, they won't hurt a tank. Maybe the rounds were not armed yet (though in T2 they can detonate at point-blank range). Anyone know the muzzle energy of a 1/4 pound projectile at several hundred FPS?--Mandolin 18:44, 23 September 2010 (UTC)

COMMENT MOVED FROM MAIN PAGE - Sage Launcher Listing - NOTE: they probably don't explode because they don't have explosive 37mm grenades, they only have 37mm flares, smoke, teargas, and other nonlethal ammo.

I moved that comment off the main page as it really belongs here. In any event we know in real life the launcher can't fire actual explosive grenade rounds. As for the context of the film - It's possible they were meant to be explosive rounds, but the explosive effects got absorbed/neutralized by the T-X or they didn't arm yet. I myself was of the mind they could have been some kind of solid slugs rather than explosive rounds (the grenade rounds have quite a hit force to them by themselves, as Mandolin stated - what if they were solid projectiles to boot?). Just some thoughts of course. StanTheMan (talk) 14:57, 8 December 2014 (EST)

I bleave the selector switch is on the left side

This image looks like she's holding a Glock 17 or standard model. The Magazine Base is level with the barrel. Glock 19's have a slight incline to the rear of the grip. Anyone else agree?

We hear the noise, and see the paint, that doesn't mean the pistol actualy fired Paintballs does it? Paintball PPKs don't exist? Neither do laser rifles and liquid metal cyborgs. Maybe they just made it up and used a suitably small pistol that could concievably also be a paintball gun, added a sound effect and put paint on Connors hands.Would the H&S nazis let one actor actualy fire paintballs at another?

I don't think this is the same gun. The Terminator's gun has a custom flash hider (similar to the one seen in Live Free or Die Hard and Iron Man) but the pictured gun lacks this feature. -Gunman69 03:48, 23 April 2010 (UTC)

That's not a "custom flash hider", it's a factory H&K flash hider. It comes off very easily; I'm guessing that it had been removed for use on another film (or for some other reason) when Dan Shea photographed the UMP for LMO's web site. I assume Dan verified the serial numbers matched. Just because the accessories configuration doesn't match exactly doesn't mean that they're not the same gun. -MT2008 (talk) 17:11, 21 April 2014 (EDT)

This part dosent make any sense and should be marked as a goof. BULLETS leave BULLET MARKS and SHELL CASINGS. So why couldnt I see any shells eject from the guns the SWAT were firing as shown in the image below?

Wait, I almost forgot to point this out, even though there were no casings ejecting, multiple bullet holes started appearing around T-850 in the grass, coffin and headstones as if bullets/rounds were really hitting/missing their targets.--Gunnerboy (talk) 01:26, 14 August 2013 (EDT)

It states the T-X as a 'cyborg' though strictly speaking that isn't proper terminology. Could it simply be reverted back to 'Terminator' or 'Terminator unit' instead? StanTheMan (talk) 15:15, 11 December 2013 (EST)