Some references to the first two Terminator films in the game

The developers of this game were clearly Terminator fans through and through, and it shows in how many references to the first two films they put in the game, some of which are shown below. 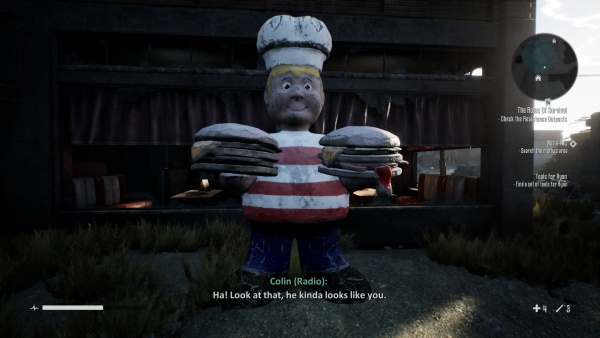 You get to visit Sarah Connor's old workplace in the game, with the same statue out front. 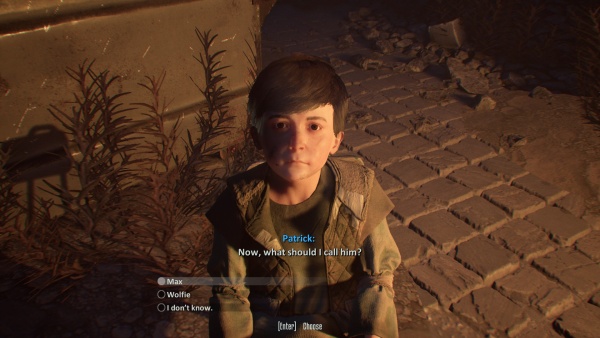 When naming a dog for Patrick the child Scavenger, you get to choose some familiar names. 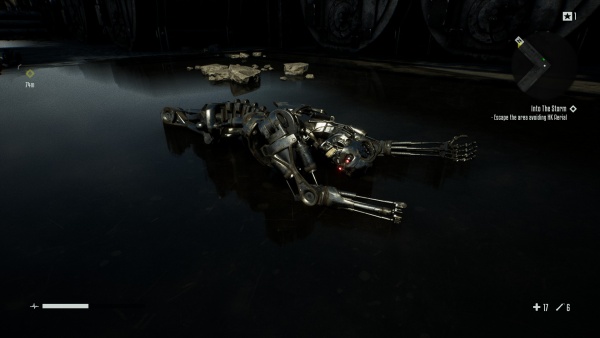 In Chapter 8 of the game you get to take down a T-800 Endoskeleton in a very familiar situation. Not coincidentally, destroyed-but-not-looted Skynet enemies emit electric arcs much like the original Terminator in the first film did when being crushed. 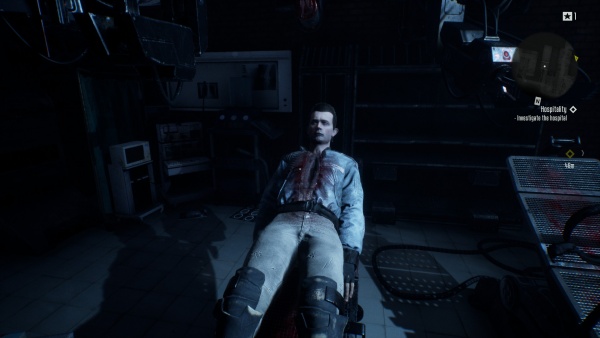 A Resistance Soldier who looks very much like Robert Patrick did in T2 can be found in a familiar hospital. 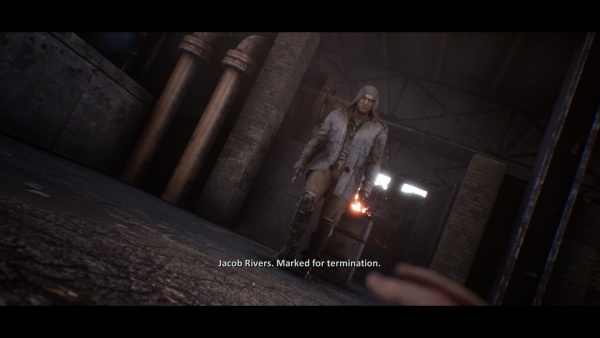 The T-850 Infiltrator model when first encountered wears a similar jacket to the one Arnold Schwarzenegger wore for much of the first Terminator film.

In any case, fans of the first two films in the series should check out the game. It's an unpolished gem to be found amongst many disastrous movie tie-in games to be found throughout gaming history. --Mazryonh (talk) 19:44, 4 May 2020 (EDT)

Okay, this page is more or less done. I would like some help with identifying the exact type of M1911 used in the game, as well as confirmation on whether the M14-style rifle is in fact based on a Mk 14 Mod 0. Also, I would like to know whether or not it's a good idea to label the M16 Rifle in this game as an M16A4, just with a retractable buttstock and a full-auto lower. Determining whether or not the currently-unidentified Phased Plasma weapons in this game are actually based on real-life firearm designs would also be appreciated. --Mazryonh (talk) 20:01, 4 May 2020 (EDT) 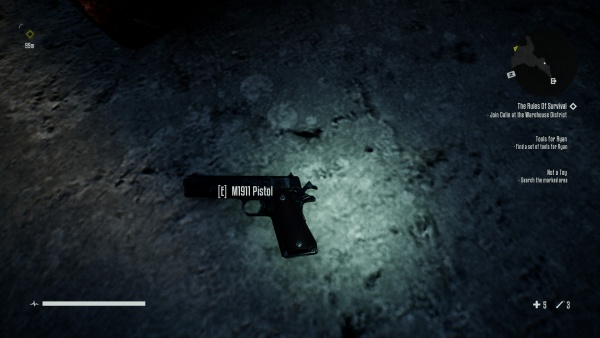 A close-up view of the ingame M1911 pistol. For some reason the cocking serrations appear to be slanted in this view while every other screenshot I've posted here of this pistol shows them to be more or less perpendicular to the barrel. 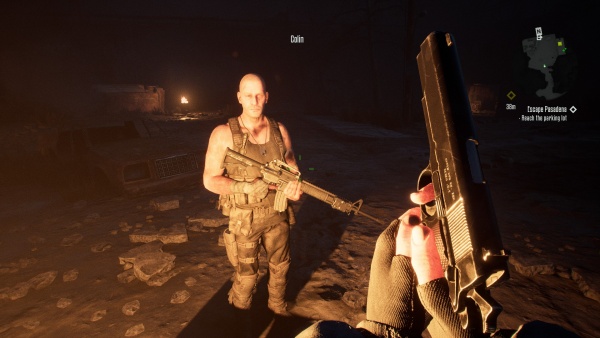 ...which shows that it's the exact same model used in H3VR and Freeman: Guerrilla Warfare - the "HEDEN GUN CO. INC" marking on the slide is clearly visible. As for what exact type it is, I'm not sure, though the slanted cocking serrations have me thinking that it's an Auto-Ordnance with aftermarket sights. The M16 is, as you said, an M16A4 with an M4-style stock, though it being full-auto is more an inaccuracy than a lower swap; the lower receiver is marked "PROPERTY / OF US GOVT / M16A4 / CAL 5.56MM / (serial number)", as seen here... 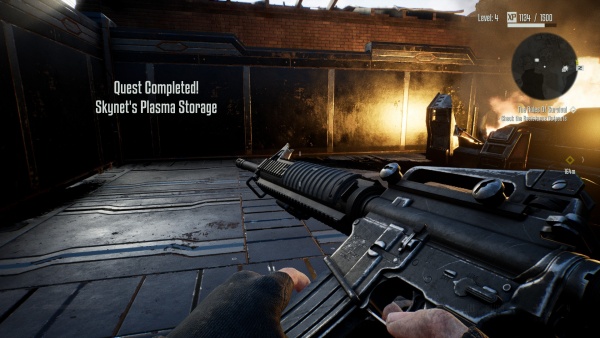 ...so it's clearly meant to be an A4, though the presence of what I think might be a "read instruction manual before use" marking behind that and the lack of a third pin hole tell me that this was probably referenced off of a civvie AR instead. I'm not sure about the Mk 14; the stock looks the part, but the barrel and gas tube are off, and the description and "US RIFLE / CAL .30 M1" marking make me think that they were going for a plasma conversion of an M1 Garand - maybe we could say it's a hybrid, or perhaps a Garand in a Crane stock (which, unfortunately enough, is a thing) or something of that sort. Regarding the plasma weapons, looking back to the movies helps - I know that the Endo Battle Rifle is based on a Calico, the RBS-80 on a Browning M2, and I'm pretty sure that the V-25 is based on the Muzzelite-stocked Mini-14s seen in Judgement Day. Pyr0m4n14c (talk) 22:27, 4 May 2020 (EDT)

Okay, so can we safely say that the M1911 in this game looks most like the Auto-Ordnance M1911A1, but with an aftermarket rear sight and a stock front sight (which would explain the odd two-dot arrangement)? And can we now conclusively label the M16 Rifle in this game as an M16A4 just with erroneous fire selector markings and full-auto capability? What about the Plasma TC16/TC30? Are the barrel and gas tube from an M1 Garand? The Plasma TC16/30 can reload from a detachable box magazine, while the M1 Garand could only load from en-bloc clips, so I'm not sure how much of that Phased Plasma gun is derived from the Garand. The "US RIFLE / CAL .30 M1" markings made me think of a Springfield Armory, Inc. M1A rifle first. I think the Muzzlelite MZ14 does look like the V-25, down to the useless front sight too. --Mazryonh (talk) 11:44, 5 May 2020 (EDT)

Well, the M1A wasn't ever adopted by the US military, so it wouldn't be marked like that, not to mention that "US Rifle, Caliber .30, M1" was the Garand's actual designation. And regarding the remarks about the barrel/gas tube being "off", this is what I meant:

M1 Garand - .30-06 Springfield. Note the lack of a space between the barrel and gas tube (which is roughly the same length as the barrel), the single-point gas tube/barrel attachment (with the gas tube not extending past it), the bayonet lug, and the rounded front sight guard.

Mk. 14 Mod 0 EBR - 7.62x51mm NATO. Note the space between the barrel and gas tube (which is roughly the same length as the barrel, not counting the muzzle brake), the 2-point gas tube/barrel attachment (with the gas tube extending past it), the lack of a bayonet lug, and the flat-fronted front sight guard.

Springfield Armory M1A Scout Squad - 7.62x51mm NATO. Note the space between the barrel and gas tube (which is shorter than the barrel, even without the muzzle brake), the single-point gas tube/barrel attachment (with the gas tube extending past it), the lack of a bayonet lug, and the completely different front sight design. 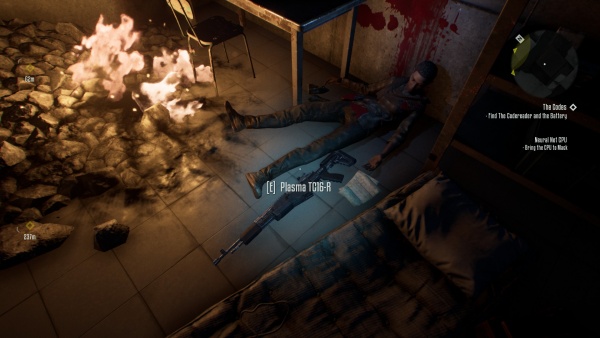 The Plasma TC16-R. Note the space between the barrel and gas tube (which is considerably shorter than the barrel, even without the muzzle brake), the single-point gas tube/barrel attachment (with the gas tube extending past it), the lack of a bayonet lug, and the Garand-style rounded front sight guard not attached to the gas block.

So, some features match the Garand, while others match different M14 variants, and some don't really match anything (e.g. how the portion of the gas tube that extends beyond the gas block is the same diameter as the portion behind it, or how the gas block doesn't protrude above the barrel like it does with the other rifles), though at least a bit of this could be chalked up to polycount reduction. It's a mutt, to be frank, and I wouldn't be entirely confident in calling it anything besides a Garand/M14-ish thing in a Sage stock, but there's probably somebody out there with a better answer. Any takers? Pyr0m4n14c (talk) 13:08, 6 May 2020 (EDT)

Thanks for your input. I suppose we can call the Plasma TC16-R and TC30-V a "M14/M1 Garand Hybrid" for now. But can we say the ingame M1911's weird sights are most likely the result of being modelled on an M1911 that only had its rear sight upgraded with aftermarket ones, not the front sight? The one in H3VR has a three-dot sight system, not only two dots. I think we have enough for the other ballistic weapons to say they were conclusively identified, at least. --Mazryonh (talk) 15:49, 6 May 2020 (EDT)

It is worth noting that this is not without some inadvertent meaning (unless of course it is we taken into account that it should portray something else, and the MP-133 did not exist yet), since the EAA imported quite a lot of IZh-81s (though most of them were variants with feed from a detachable box mags). --Slon95 (talk) 14:12, 9 May 2020 (EDT)

What's the "inadvertent meaning" you're talking about? That coincidentally there were a lot Izhevsk firearms imported into the USA by EAA during the 1990s? --Mazryonh (talk) 21:21, 9 May 2020 (EDT)