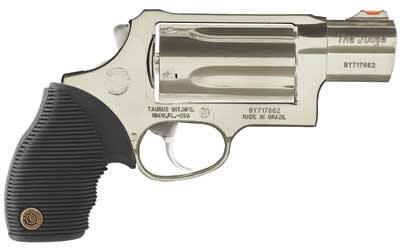 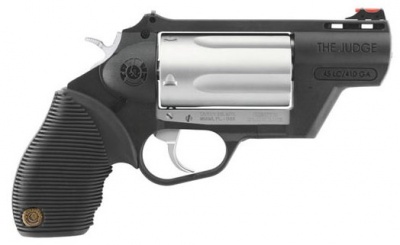 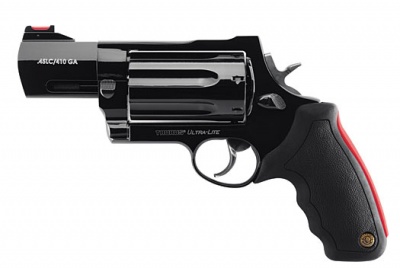 I hate the commercial on the Outdoor Channel in which a lady draws her Taurus Judge from her purse as two muggers close in on her. We hear "Lets get her.", and then see five watermelons blow up and desintegrate when hit by the fearsome 3" Magnum 410 rounds. I promise you guys if I get my hands on a Judge in the future (very likely too, my Dad has a customer ordering one), I'll tape that commercial, and then shoot watermelons with 410 and .45 LC rounds and put this gun in its place (maybe make a youtube video. The best title I can think of is "Jury duty for the JUDGE"). Keep in mind the Thunder 5 offered the same thing 10 years ago and there is a reason no one was impressed or owns them in vast numbers today. Like mentioned in the article, the long cylinder/short barrel makes the .45 LC inaccurate and the rifling spins the shot pattern to give it horrible accuracy poor for more than 10 yards. If for some reason you would want to own this gun as a concealed carry weapon (despite its weight and bulky length), load two 410s in first and then 3 .45 LCs. This way, you can use your scatter shot to fire quickly in the panic of a fire fight, but as you focus, you can hit them with the .45s (which are more powerful). Or you can buy a smaller .45 only revolver and save time, money, and space. - Gunmaster45

So you guys talk disparagingly about the gun in the article because you disliked the commercials? I own a Judge and I have .410 shells with 3 pellets of 000 buck shot in them. At 25 feet all three slugs still keep within about a 9 inch circle. Not only that, but there is plenty of stopping power, without penetration, which could send a 45 slug into my neighbors house. This is perfect for what I want, plinking and home defense. I have shot a watermelon with it, I have the 2.5" (non-magnum) and it does a fine job of sending pieces everywhere. You should give it a try before slamming it. I have no login but I will leave my name as Tom K.

Last month's issue of Guns & Ammo talked about a new .410 round developed with the Judge in mind. It's basically a new take on the old 'buck-and-ball' idea. The round has four disk-shaped mini slugs seated on top of several pellets of BB buck shot. According to the review the round works great in both Judge revolvers and .410 shotguns. -Anonymous

You're totally right Tom K, I hate it when little shits say how much they hate a gun and then say they've never shot one before.

But you are a little shit; you're insulting a firearm you've never used based on its ad campaign, that's little-shit activity right there.

How is insulting Taurus' ad campaign the same as saying the gun sucks? The gun itself is okay but I doubt it will explode a full size watermelon.-S&Wshooter 17:49, 12 December 2009 (UTC)