There is only one scene in this movie that pissed me of(concerning guns). During one of the fighting scenes you can see a K98 getting fired with closed but unlocked bolt. :-( Nevertheless this is a great movie, give it a watch. I think there should be subtitled version on youtube. Another recommandable movie that was made a few years before "Stalingrad" is the Finnish "Talvisota"(winter war), which is also pretty good. Greetings from upper Franconia.

Machine gun on screenshot can be tube. But some tanks fire their machine gun during the battle scene. Unfortunately at this moment i can't give you screenshot to prove it. Bednardos 15:53, 25 June 2012 (EET)

Here is this tank, which fired a hull mounted DT machine gun 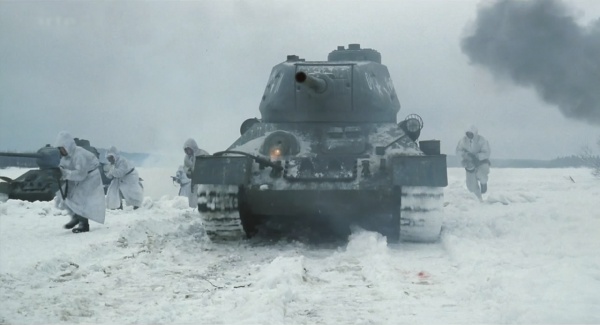 It's usual problem with tank (and aircraft) weapons in war movies: we know what must be there but it is very hard to say if there is really used the proper weapon, or some other weapon, or even a movie prop. There are hundreds of screenshots with T-34s, Tigers, Shermans where only a bit of MG barrel can be seen. So we have to take on trust that the MGs are proper ones or write everywhere that it is supposed to be DT/MG34/M1919 etc. Greg-Z 07:59, 25 June 2012 (CDT) 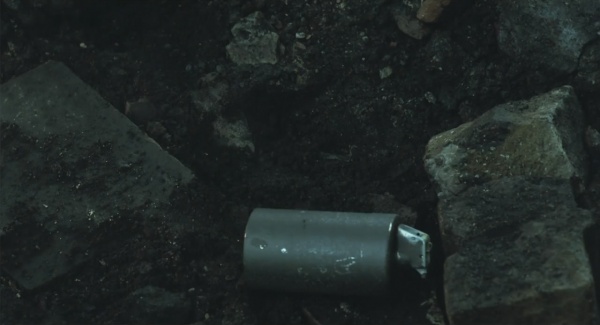 Smoke grenade on the ground 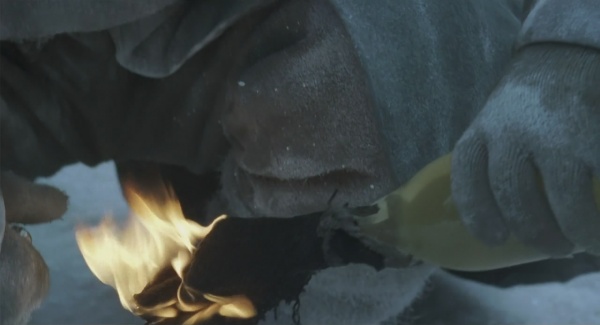 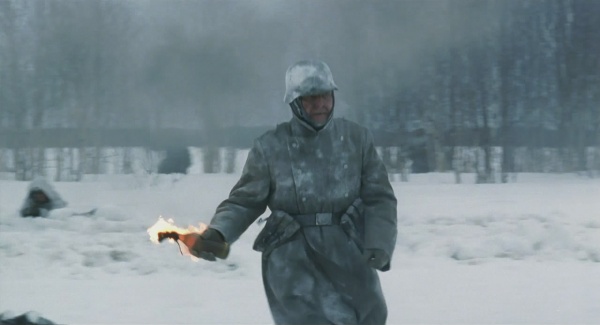 A German soldier attacking a T-34 tank with a Molotov cocktail. 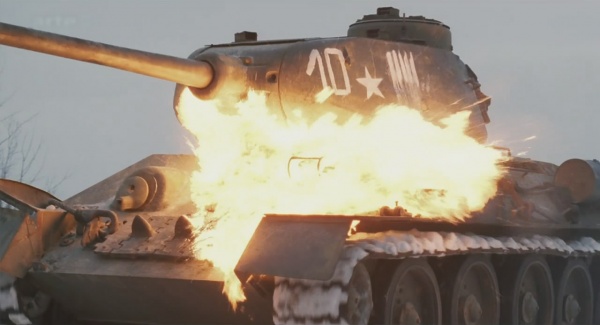 The Molotov cocktail hitting the tank.

Blow up? Probably not, unless the flames hit the shells for the main gun and is allowed to "cook" them for a period of time for it to actually detonate the warhead. (which in this case it doesnt). I'd put this up to hollywood license. The movie "The Winter War" has a better scene with the molotov disabling a Russian tank. Dudester32 (talk) 11:06, 6 July 2016 (EDT)
But in a scene(not this one prezented here)a Molotov falls somwehre on the right side near the turret,explodes on the armor,and the tank suddenly BLOWS UP.Logically explanations?--VLAD M (talk) 18:14, 9 July 2016 (EDT)

I agree with Hchris about it being a PAK 38. Firstly the shield is definitely the more complicated one with the little wings at the end that was used on the PAK 38. Secondly the recoil track on the carriage looks too short for a PAK 40. Thirdly the ammunition has a pronounced shoulder which was on the 5cm PAK 38 ammo but not the 7.5cm PAK 40 ammo. There are other differences, but these ones I can describe without being able to point to stuff. --commando552 (talk) 14:39, 17 September 2013 (EDT)