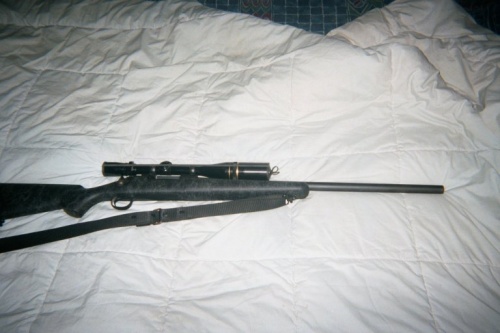 Im not too good with when specific variants were introduced and I cant seem to find a definite date for the 700 BDL, anyone know EXACTLY when it was released?

as Americans we all know the popularity and influencialality of the model 700, for any one confused with whether a rifle is an R700 in an AICS chassis and an Accuracy International Arctic Warfare series, look at the bolt. the AI l96 series uses a ball shape bolt at the end of a round piece of metal while the R700 uses a flat "Tab" bolt handle User:SargeOverkill

Different trigger guard design. The M24A3 has a magazine release paddle-like thing, and its magazine is longer and wider. --bozitojugg3rn4ut 07:14, 13 April 2012 (CDT)

Couldn't tell whether to put this here or on the No More Room In Hell article, decided here because I figured people would actually see it here.

I have screenshots taken and uploaded for the article, but I need a picture of the IRL gun, since none of the pictures on the R700 article and talk page match. I found one picture that looks good, but I want to ask you guys if this picture is okay to upload: http://www.infobarrel.com/media/image/46363.jpg

I had always thought the base rifles were further worked-over a bit at Quantico prior to use and not issued as straight off-the-shelf pieces, mainly in the case of the A1 but also perhaps with the original M40 as well. Could be wrong though. StanTheMan (talk) 16:36, 20 August 2016 (EDT)

So, if any of you watch 60 Minutes, then you'll know about the safety concerns regarding these rifles, being that certain trigger models (more predominantly the recent model- the "X-Mark Pro", if I recall correctly- along with the earlier "Walker" model) have had issues with firing without the trigger being touched. Does anybody have anything to say about this? Comments, questions, concerns? Bueller? Pyr0m4n14c (talk) 18:59, 20 February 2017 (EST)

My personal opinion is if you buy the rifle, just replace the trigger with a quality one, and you're good to go. I don't know if that issue is true or not, but it's probably best to be on the side of caution. --Sasquatch the Reaper (talk) 01:04, 21 February 2017 (EST)

Two things I changed which are weird or wrong. 1) The title is weird. Slash 700? Assume it's missing a P, so added that. 2) PSS stands for "Police Sniper System" per, say, this article from SAR which has as sources: Remington http://www.smallarmsreview.com/display.article.cfm?idarticles=1804. Other tweaks to make it all fit, for accuracy. Do tell if you hate it all though. Shoobe01 (talk) 23:53, 30 March 2018 (EDT)

So, with the recent adoption of the Mk 13 Mod 7 by the Marines, I've been looking into the developmental progression of the Mk 13 SWS and I've been able to identify four versions with certainty: the Mod 0 which had a McMillan A2 stock (this is basically the .300 WinMag rifle described by Chris Kyle in his book and subsequently reproduced for the film adaption, the Mod 5 in an AICS 2.0 chassis as pictured on this page which came about in around 2009, the Mod 6 which was identical to the Mod 5 but had a left-handed action, and the new Mod 7 in an AX chassis. As for a Mod 1, 2, 3, or 4, I either simply can't find any info online or Crane jumped from Mod 0 to Mod 5 for some reason. Spartan198 (talk) 16:47, 12 May 2018 (EDT)