"No one is mainly listed using one more than another because in Vietnam, sooner or later, everyone had to lug the 23lb Pig around on patrol."

Oh, i know what that means. It means that sooner or later every one had to lug the pig because most of the Soldiers/Marines would be dead or wounded, right? I just wanted to be sure.-Oliveira 17:37, 9 June 2009 (UTC)

All these war movies.

My Father was a field medic in Vietnam and He says all these Vietnam War Movies may have great stories, but that if you really talked as loud the actors in these movies, you would be dead. - Kilgore 20:12, 7 August 2010 (UTC)

Well, on a sorta OT note, a few Vietnam Veterans have lambasted Platoon for inaccuracy, claiming that it's offensive to Nam veterans. -- Crackshot 07:17, 5 January 2010

I think it would be inaccurate as in not every Veteran had the same experiences as seen in the film, but the weapons handling, patrols, and other day to day details look authentic. Remember, Oliver Stone is a veteran as well as technical adviser Dale Dye. --Ben41 07:38, 5 January 2011 (UTC)

Yes, veterans praised the movies 'feel' of Vietnam. But apparently most veterans can relate better to Hamburger Hill and We Were Soldiers then Platoon, Full Metal Jacket or Apocalypse Now. Crackshot 08:26, 5 January 2010

When I saw this movie again, I turned it off when Berenger shot that woman in the village. I couldn't stand it because that scene puts into question Veterans of the time and actions they may or may not have done, despite this being a movie. It made me wonder did shit like this really happen. One thing I can't stand to hear is the crying of a little child when her mother just got shot in front of her Excalibur01 (talk) 13:57, 10 September 2012 (EDT)

It really annoys me when people say something like one person in this film gives all Nam vets a bad name. Of course it doesn't. There were possibly individual people like Berenger there for real, but it doesn't mean every Vietnam veteran was a total psycho. 99% of the men serving there were probably decent people in a terrible place, and the way you Americans treated them when they came back was frankly disgusting. Just because you disagree with a war doesn't mean you can pass the blame onto the men who fought in it. In answer to your question about historical accuracy, you'd probably have to ask a real veteran, although Oliver Stone says he based most of the characters in Platoon on people he knew whilst serving there.--Leigh Burne (talk) 03:48, 11 September 2012 (EDT)

I don't see how that's discrediting good vets, there were many war crimes committed by US soldiers in Vietnam and they're well documented, it's pretty accurate really. --Slemke1998 (talk) 10:41, 1 May 2015 (EDT)

Removal of a screenshot

Wouldn't it be better to put a spoiler warning at the top of the page? That's not the only picture that shows spoilers.Kornflakes89 18:56, 19 April 2011 (CDT)

It isn't really a quote actually. In my uncle's platoon he rotated the M60 "Pig" around, so each soldier would have to carry it, just because of it's a pain in the ass to lug around. Nothing about everyone dying...--Ardtanker14 19:14, 9 November 2010 (UTC)

This was posted on an image thumbnail on the main page, but it describes something that isn't actually shown in the image, and in any case, seems more like something to discuss, and so I've moved it here to the discussion page. Apologies if his has caused any problems. StanTheMan (talk) 13:18, 19 September 2014 (EDT)

Original Comment - Sgt Barnes draws the M1911A1 from his cargo pouch during the raid on the village. Why is the gun in that pouch? Was this gun peraphs expected to be used although the LCE wasn't designed for it? Or was it just a trick to be used in case of capture? Charly Driver (talk) The M1911 has a holster he just doesn't carry one. Personal prefernce on how he set up his gear. Just like his t handle blade knife wasn't issue but he carries one. --Jamesmac1801 (talk) 18:46, 1 May 2015 (EDT)jamesmac1801 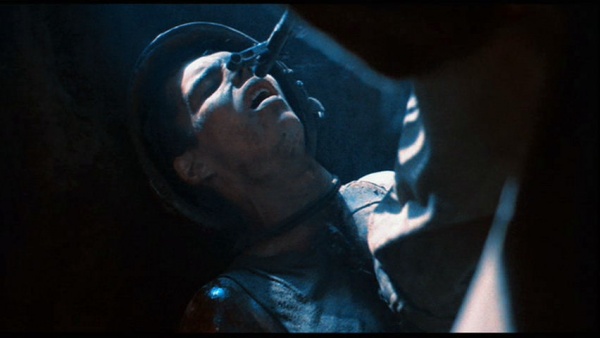 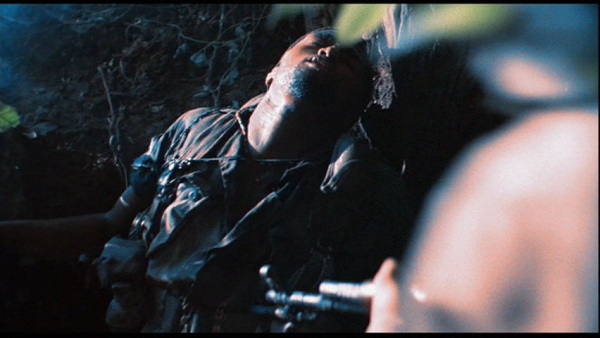 A soldier stabs Pvt. Junior Martin (Reggie Johnson) repeatedly with the bayonet of his Type 56.

I must respectfully disagree that the LMG in the weapons cache is a PK. The handle on the movie weapon is on the right side of the weapon (unlike the PK's left side). The handle is also not squarish like on a PK but is rather round. Also below the barrel you can see the gas regulator portruding which the PK does not have. (at least not at that position). My main problem with it being a FN MAG is that I cant see the charging handle which is on the right side. Dudester32 (talk) 13:05, 6 July 2015 (EDT) 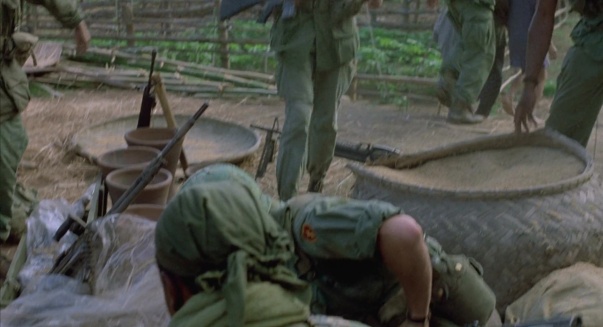 Do a full zoom and check out the handle and the gas regulator.

Oliver Stone, writer and director of Platoon, is a Vietnam vet...And if he did not experience/observe this personally, he got inspiration from this clip for later use in Platoon. Dudester32 (talk) 13:58, 10 July 2015 (EDT)

Why the stainless shotgun trigger guard?

I was wondering if there was a practical or technical reason for the stainless trigger guard on the 870. Is it for something in particular or just for looks? --Caldwellb734 (talk) 01:18, 7 December 2015 (EST)

It isn't stainless, all Remington 870 trigger guards are made of either aluminium or plastic. The aluminium ones are anodised black but this can wear off making it look bad so some people just polish them for aesthetics, there is no practical purpose. --commando552 (talk) 20:11, 7 December 2015 (EST)

So Elias was his first name? I see a few places have him as "Elias Grodin," but was that ever mentioned in the movie? Was it seen on his uniform or his equipment? If not, where did it come from? I'm suspicious because almost no one else is referred to by their Christian name in the film, it's mostly last names and nicknames. We know SSGT Barnes' first name is Bob because he's called that at one point, but I don't recall anyone ever referring to Elias as anything other than Elias, especially since he's an NCO. --Funkychinaman (talk) 00:20, 14 February 2016 (EST)

I too have seen that name listed in spots but I'm not sure myself really. Mainly all I was doing was getting the page a bit more uniform - "Elias Grodin" was already there in a couple places and I was more just trying to get/keep it consistent along with other things (mainly the rank abbreviations - some were correct Army-style, some weren't). On the name though, again, I'm not really sure on way or the other. StanTheMan (talk) 01:28, 14 February 2016 (EST)

I can't find it in the scripts and the transcripts I found online. What's more telling, is that not only would it be odd for his subordinates to refer to any NCO as "Sergeant <First Name>" like he was a camp counselor, his superiors like Wolfe and Captain Harris wouldn't do it either, but that's what they did. I can see Elias getting chummy with his squad, and maybe his platoon leader to the point where they'd refer to him by his first name, but not his company commander, and certain not when he's accusing another NCO of a war crime.

My report sir, will include Lt.Wolfe as being witness to the shooting ...

All right, Elias. Sergeant Barnes, I want a report from you ...

You got it sir - and I can throw in plenty of eye-witnesses if you want sir ...

TL;DR version: The name "Elias Grodin" isn't found in the movie or the scripts, and more importantly, it makes no sense. Since IMDb still has it as "Sgt Elias" as well, I think we should keep it at SGT Elias. --Funkychinaman (talk) 08:38, 14 February 2016 (EST)

Sounds good. Long as ALL the entries for his name on the page say just that all the same and no one else half-ass adds something different, I'm cool. While we're at it, are we sure about the ranks as well? I've seen both characters listed as 'Sergeant' and 'Staff Sergeant' (In one screencap Barnes does look like he has SSG insignia) - May as well get that correct too. StanTheMan (talk) 14:43, 14 February 2016 (EST)

Barnes is definitely a SSG, you can see it here. I can't seem to find any images of Elias with his sleeves rolled down far enough. --Funkychinaman (talk) 17:59, 14 February 2016 (EST)

According to this blog post, it came from the dog tags from the PC game cover. It's also on the Blu-Ray cover. But as the blogger noted, the dog tags also say Elias as a Marine. The blogger also notes that writing on the dog tags on the original posters is illegible, but I haven't confirmed that yet. Given the source of the name and the discrepancies above, I don't think it should be considered canon. --Funkychinaman (talk) 10:32, 15 February 2016 (EST)

Eh, I've seen plenty of covers/etc for stuff with inaccurate/non-featured details on them. I wouldn't consider it much if at all myself either. Frankly I lean to your original reasoning with omitting it per it not being in the actual film or script. Ultimately, I'm good either way as long as the page is consistent. StanTheMan (talk) 14:30, 15 February 2016 (EST)

During the first patrol a brief shot shows a soldier carrying an unidentified rifle, possibly a M14 though some details does not match a standard M14. 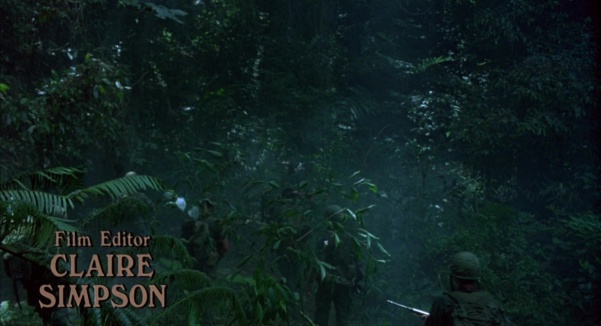 Solder on the right with the unknown rifle. The weapon has got (at least in part) wooden furniture.