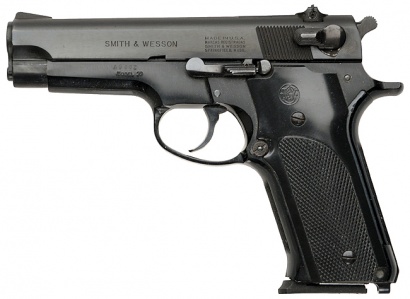 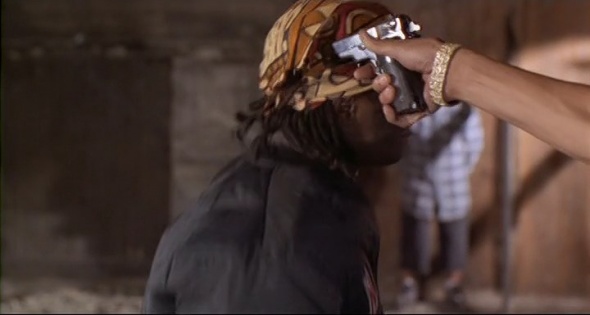 The frame step can be seen here, in the same place as the 59. Also note flat backstrap. 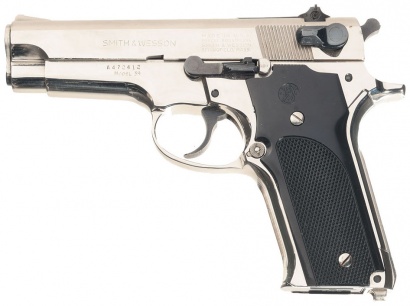 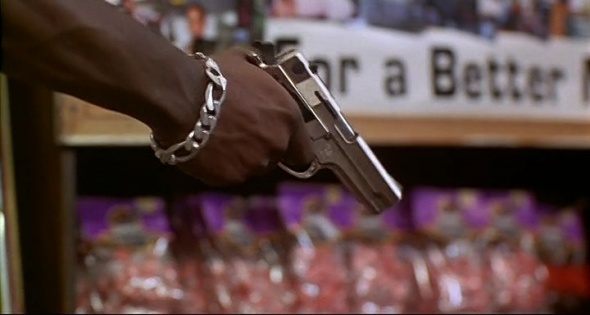 The frame step matches in the same place as a nickel S&W 59, not to mention the same sights (not adjustable). 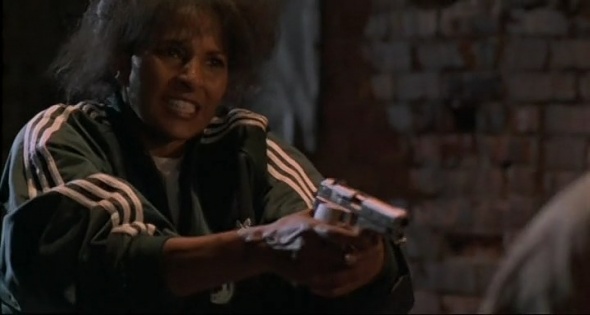 Note the frame step here. This is a Model 59, with pearl grips.

The stainless snub nose looks a bit off for a Model 60, doesn't seem to have a flat end to the shrouded lug as S&W revolvers do. Also might have a symmetrical - that is 6-round - cylinder. In which case this is more likely a 3rd Gen Colt Detective Special. The N-frame also looks a bit small making me think this is a smaller piece. Also - and this is I guess a trivia note as much as IDs, several screenshots show they reused footage from Colors - Specifically the ones with the first and second un-ID'd shotguns (Of which I believe both are pistol-gripped Remington 870s - the second most definitely), with the second shot also having a Beretta (oh yeah, pistols a Beretta), and a revolver in the background which is a Colt Python. The third Micro Uzi shot of course is shared with the 'Un-ID'd shotgun 1' image. In the event, you may perhaps wanna use some of the images from the Colors page, as they are better grabs. StanTheMan (talk) 01:17, 28 September 2017 (EDT)

Thanks! I'll make the appropriate edits. About the supposed N-frame: as it is a smaller gun, then the general outlook matches S&W Model 19, Colt Trooper Mk III or Ruger Security Six (less credible). What do you think? Greg-Z (talk) 03:12, 28 September 2017 (EDT)

Tough to say but.. looks like the revolver has a flat front to the frame (ruling out the Colt which is kinda angled) and doesn't look like it has the 'humps' at the rear behind the cylinder as with Rugers which lean it towards being a S&W Model 19 to me. StanTheMan (talk) 01:08, 29 September 2017 (EDT)