Unknown revolver seen in the trailer. 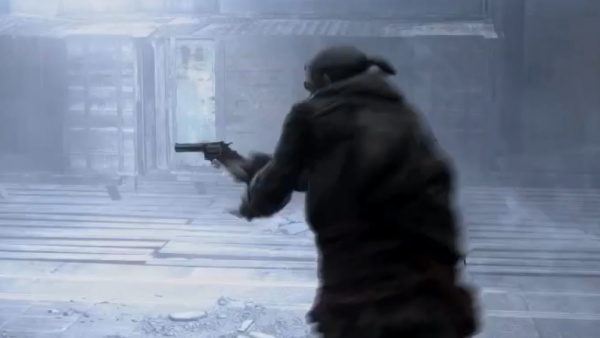 I think it will be some sort of Russian revolver, considering that Metro 2033 did not include American weapons, not like in some games where Russians use US/German/Belgian guns. :) Know what I mean, right? - bozitojugg3rn4ut 06:54, 17 August 2011 (CDT)

Well, Russians don't use Russian revolvers either. Hence MP-412 REX (Revolver intended for EXport). It failed IRL though (popular in games for some reason). And the last revolver that was in Russian service is actually of Belgian design ;)
So yeah, it's very likely that the revolver is Western one (American in particular). --Masterius 10:13, 17 August 2011 (CDT)

You are 100 percent right, however you forgot one important thing. You DO NOT control an enlisted Russian soldier, and there is no military in this game. Still tho, that piece could be from any country, but until more info is revealed I put my vote on that it is from mother Russia. (I could be wrong, tho) - bozitojugg3rn4ut 10:38, 17 August 2011 (CDT)

The Metro Wiki has been updated with articles for some of the new weapons, including screenshots and their own discussion on what they are. I'll provide the links here, since I don't have the time right now to add each picture and update the main page:

Valve: The bolt-action rifle in the Duplet picture on the main article. Also includes a detachable magazine (with a cutaway at the rear for viewing the remaining rounds) on the left side. http://metrovideogame.wikia.com/wiki/Bolt-Action_Rifle

Single shot pistol: Homemade 12 gauge pistol. The barrel swings off to the left side like the swing-out cylinder on a modern revolver for reloading. http://metrovideogame.wikia.com/wiki/Single-Shot_Pistol

Sniper rifle: Some kind of high power bolt-action rifle similar to the PTRS-41 with some bits from a PTRD-41. http://metrovideogame.wikia.com/wiki/Sniper_Rifle

Semi-automatic pistol: Fictional design. Screenshots are bad, but it looks like a Walther P38 with the magazine placement of a Mauser C96. http://metrovideogame.wikia.com/wiki/Semi-Automatic_Pistol

Handheld improvised minigun: Yeah, they actually made one. Chambered in 12.7x108mm. Haven't watched the video, but it apparently needs a spring mechanism wound up before firing. http://metrovideogame.wikia.com/wiki/Hand-Held_Minigun

The Heavy Automatic Shotgun, or "Azbats" returns in Last Light as a DLC weapon, for those who missed wondering how you can sprint with an 80 pound belt-fed shotgun. Atypicaloracle (talk) 04:13, 19 July 2013 (EDT)