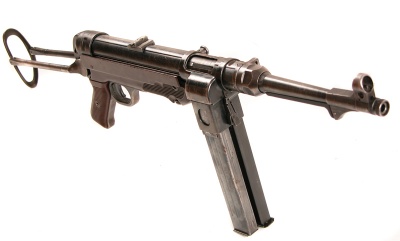 One thing I've noticed from being on this site, is how many MP40s are used in low budget Australian movies. Is the MP40 really that inexpensive? --Jackbel 12:04, 20 December 2010 (UTC)

Given the numbers lurking around from various WW2 movies, I imagine blank-firing MP40s aren't exactly the hardest thing in the world to get hold of. Wikipedia says the Norwegian Army was still using the MP40 in the 70s, there's a German semi-auto version called the BD38, and that Star and Zastava make MP40 clones; in other words, it's not like this is a rare or even really an out-of-production weapon. Evil Tim 01:31, 25 August 2011 (CDT)

I notice that the fire modes section of the specifications are listed as unknown. I'm under the impression that these weapons are full-auto only, but thought I'd ask for confirmation of this before I changed anything. I'm fairly sure I'm correct in regards to the MP-40, but I can't be certain about the MP-38 & MP-41. Jimmoy (talk) 08:47, 9 January 2013 (EST)

Here’s a nice one for MP40 aficionados: in a behind-the-scenes shot from Countdown (Lichnyy nomer), an armorer is playing around with an MP40 that has a picatinny mounted red dot sight. It’s not seen in the actual movie so it is probably something put together just for the fun of it, PeeWee055 (talk) 10:03, 4 December 2013 (EST) 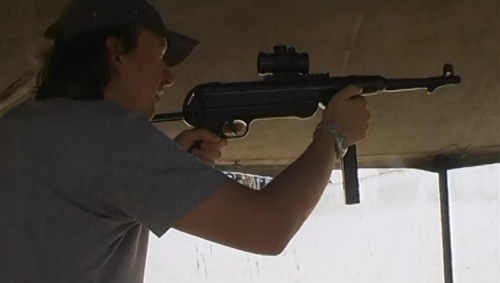 Thanks for sharing, this is very interesting. Wonder what's next; flintlocks with underslung grenade launchers? PeeWee055 (talk) 05:23, 5 December 2013 (EST)

The Madsen pics came up in the forum a few years ago and we were amazed. The M3 sort of makes sense, the Phillippines just don't have that much money for new weapons. As this link states, refurbishing forty old M3s cost the same as a new UMP. What's Brazil's excuse though? --Funkychinaman (talk) 13:04, 5 December 2013 (EST)

There is a whole thread on Militaryphotos.net discussing the use of the Madsen in Brazil. One poster provided this explanation:

I spent some time with the Rio de Janeiro police last year. I asked about the Madsen and even took a couple of pictures. The police are very proud of them. They are extremely well made and therefore extremely reliable. Most of these weapons were originally made in the mid 1930s. The one I played with was stamped 1932. With very little modification and maintenance, besides their rechambering for NATO 7.62x51 ammo, these babies just keep on giving. The police love them because they scare the living **** out of the narcos. They make a lot of noise with their relatively slow rate of fire and shoot right through the typical brick walls that most of the structures are made of. This is a drawback when there are a lot of non-combatants around which limits their use. The biggest drawback is their weight. They are relatively small in size, but most of the parts are precision machined out of high grade steel, so they weigh a lot more than you think. It is a surprise to pick one up for the first time because you are expecting a much lighter weapon. However, they never jam unless fed with defective ammo, and can keep firing as long as you can feed magazines into them. Nobody that I worked with complained about them or wished that they had something else.

A reliable source confirmed to me that until end 1994 security forces at Schiphol, the main international airport here in Holland, were equipped with the M1 Carbine! That year, they switched to the Heckler & Koch MP5A2 which is still in use today, PeeWee055 (talk) 05:45, 11 December 2013 (EST)

Spring failures in other MP 40 variants?

This has been bugging me a while. I know the MP 40 could suffer spring failures if fully loaded, but i haven't seen references to such issues regarding the MP 38 and MP 41. So my question is whether they suffered the same problem or if it was unique to the MP 40?

And if they didn't have those issues then what changes was made to make the MP 40's magazine worse, and why?

On the other hand, if they had the same issues, then i wonder if earlier models with side-mounted magazines, such as the MP 28 and MP 34, had such issues?

Okay, so what's the deal with this thing? Does it feed from both magazines at once? Does the second magazine well simply serve to hold another magazine for quicker reloads? I really don't get it. Pyr0m4n14c (talk) 21:44, 23 April 2017 (EDT)

It works kind of like a KSG or UTS-15 AFAIK, where a tab behind the magwell selects whichever magazine is currently feeding into the gun. At least that's how it works in Red Orchestra 2.--AgentGumby (talk) 23:27, 23 April 2017 (EDT)

Stumbled across this set of photos while doing some browsing; apparently, they're part of a German manual or official document of some description regarding shooting positions for the P08 and MP38. Notably, the soldiers holding the latter seem to be holding it near-exclusively by the magazine well/magazine, indicating that the practice was, to some extent, official (or at least officially accepted). Would this mean that it's not incorrect to hold it like that? I mean, it's obviously wrong to hold the end of the mag, but holding it like this is apparently OK, at least by the standards of the people who issued the thing. Pyr0m4n14c (talk) 23:10, 4 May 2020 (EDT)