If I get some time, I wanted to add just a few (and I mean FEW) caps from the movie, because some really nice closeups were over looked. - Gunmaster45

It may have been selected as the weapon is still (2008) in use and ammunition produced for it; the British Royal Horse Artillery use the cannon, on a conventional carriage mount, for ceremonial purposes such as firing salutes and participating in military "tattoos". However this is mere speculation.

It goes without saying that this weapon was never, in reality, used either by the US Army or by any National Guard unit.

However it's very cool looking and fits the time period. Jcordell 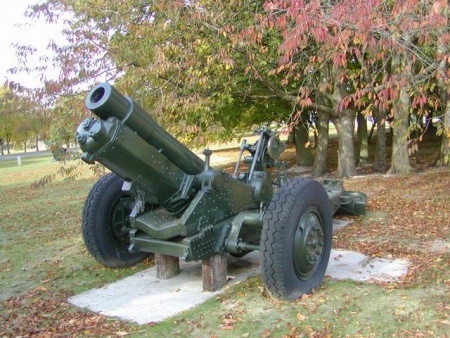 Peter Jackson is not the only one to appear as the gunner. Movie director Frank Darbont and special effects make-up maestro Rick Baker also were. Is this information needful ? --Kloga 13:21, 3 April 2010 (UTC)

I am pretty sure these are not M2 .50 Brownings but rather the Browning AN/M2variant which fires a .30 cal round. I base this on the relative size of the weapon compared to the fuselage of the Curtiss Falcon and, honestly, that when I looked up the aircraft itself the armament mentioned .30 cal guns only...no mention of .50 cals. --Charon68 15:23, 2 May 2010 (UTC)

During and just after the climax of the film, several U.S. Army soldiers gathered around the Empire State Building can be seen holding M1903 Springfield bolt-action rifles.

Actually most of the rifles shown are the similar Model 1917 Enfield bolt-action rifle. This was a First World War improvisation by the US Army to address shortages of the Springfield and lack of manufacturing capacity for that rifle. The M1917 was a modification of the British Enfield Pattern 1914 rifle (itself a copy of the German Mauser Gew 98) for the US .30-06 cartridge. As the P-14 was being manufactured by Winchester and Remington (in the British .303 cartridge) it was far easier to alter production than re-tool to make the Springfield. In fact far more Enfields were manufactured by the end of the war (~2.65 million, in addition to 1.15 million for the United Kingdom) than Springfields.

Three soldiers armed with M1903 Springfields pose for a photo in front of Kong's body.

It's kind of hard to tell, but those are in fact M1903 Springfield Rifles. The Front sights give it away. The sights on a Springfield rifle are a single blade. The M1917 Enfield sights are what I call "the grandpa of the three-prong sights", so I think I might change it if thats okay. - Kilgore 23:42, 8 August 2010 (UTC)

Those are definately Enfields. They have the front sight ears (the "three prong sights" you describe) and the very distinctive potbelly stock and magazine floorplate. - User:Nyles:Nyles

the picture of the thompson drum mags look like they have bullets bigger than .45 ACP. Continuity error or am i just dumb?-User:SargeOverkill

Captain Englehorn about to shoot Kong with a harpoon gun of unknown make or model. Note the use of the chroma screen.

Ann attempts to stop Captain Englehorn from shooting Kong with his harpoon gun.

Someone said that Hayes was carrying a WWI era M1911, but I'm convinced he has a Pre-WWII Commercial M1911A1 because the trigger appears to be too short and I saw the Colt Automatic Caliber .45 markings by the ejection port that wouldn't be on a military pistol. Also the barrel is stainless steel which was only seen on commercial pistols as military ones have blued barrels. He does appear to use a military holster however.--AK107DX 12:50, 12 May 2013