Robert Muldoon (Bob Peck) also appears to carry a pistol in a black leather holster with "US" marked on it, which usually means that he keeps some type of M1911A1 as his sidearm. Muldoon isn't seen pulling this weapon in the film.

Colt M1911A1 Pistol - Commercial Model known as the "Colt Government Model" - .45 ACP. This has a deep Colt factory blued finish, common for commercial variants before and after the war. 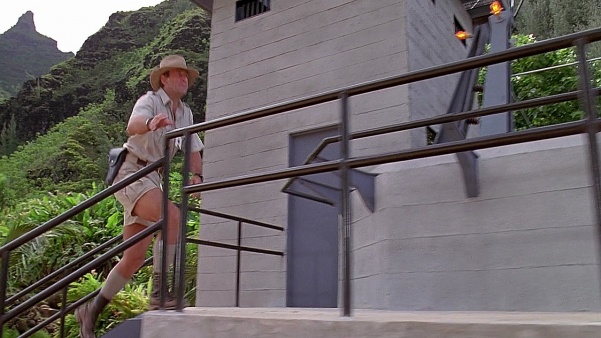 Muldoon seen with a black leather .45 holster at his side.

This movie was the first thing I ever saw the SPAS-12 in and I must say they did a good job of making it look cool. But they also did a good job showing how it's unreliable. Not to mention it's too heavy for a conventional shotgun.

-I really doubt if a shotgun would be sufficient enough against a full grown dinosaur. See, in the novel, Muldoon uses a custom tranquilizer launcher. Topps Comics` adaption of the movie illustrates this by showing Muldoon holding something that looks like a mix between an RPG-7 and a Panzerfaust 3(black RPG launcher w/a Panzerfaust 3 grenade). So why they decided to use a shotgun in the movie is beyond me. ...But it is a cool shotgun!

It would be rational to consider a shotgun when the expected threat--velociraptors or the species they derived the movie velociraptors from (http://en.wikipedia.org/wiki/Deinonychus)--are on the same scale as humans, fast, and probably susceptible to similar levels of energy as humans (or similar sized birds). Against something larger--like a T.Rex--shotgun probably not so useful.--Deathbunny 17:57, 18 March 2011 (CDT)

They probably had different weapons stored in buildings that weren't shown in the movie, I kinda doubt that they'd spend millions creating these creatures, then only buy shotguns and a few M16s to protect themselves in case they ever escaped. Kornflakes89 18:52, 19 April 2011 (CDT)

The books had the lack of weapons explained by Hammond's rather wonky worldview; he didn't want anything around that might harm his precious dinosaurs. Though he did still let Muldoon buy a TOW launcher, but I don't suppose blasting raptors to meaty chunks would get you much of a reputation as a family movie. Evil Tim 06:39, 20 April 2011 (CDT)

Yeah true, but movie Hammond's character was changed quite a bit from his novel character, example, novel Hammond seems to not really care that his grandchildren are in danger, so it's possible that movie Hammond got more weapons, just had them placed only where they'd need to be. Then again I guess it's mostly just speculation, for all we know the dinosaurs could've eaten the other weapons. Kornflakes89 03:30, 21 April 2011 (CDT)