They've also added a Heckler & Kock P2A1 to the game a while ago. -PaperCake

This is cleary not a M45, and I'm not sure what M1911 variant is that. I think it's a Colt Commander, but like I said, I'm not sure. As you can notice, there aren't the usual holes on the trigger and the "Lines" on the slides are different, same for the grips, they are different.

I think it's just a hybrid. Parts mixed with others, because even the Springfield 1911-A1 9x19mm has the original hammer. -James Dalcan

It looks like a M45 with a different trigger and grips and a normal M1911 style safety. And in-game it uses non-tapered magazines so I'm pretty sure it's chambered in 45 ACP. -PaperCake 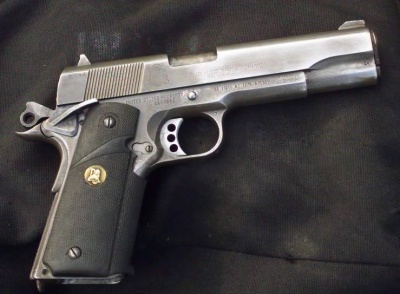 The M1911 Variant in-game with synthetic grips for Security: 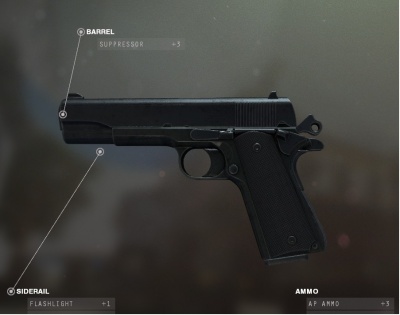 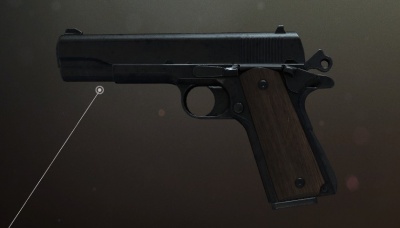 The M1911 Variant has been replaced, and I added it to the page. I still have a quesion mark for the insurgents M1911 variant since it's the old model with the wooden grip and other, if you can help it will be really appreciated! James Dalcan (talk) 10:31, 19 December 2014 (EST)

I honestly think it's a bit asinine we're calling this page Insurgency 2 when even the developers just call it Insurgency. Since the first game was just a Source mod, why not have a page titled Insurgency and another called Insurgency (Source Mod)? I saw this page listed on the FAL page and thought they'd made a sequel.--That's the Way It's Done (talk) 20:08, 30 December 2014 (EST)

IGN isn't what many would call a good source, especially when the devs say something else. I've always felt that the 2 shouldn't be there.--Crazycrankle (talk) 22:18, 13 January 2015 (EST)

Did the DEVs confirmed that is just insurgency? If that so, we can add "(Standalone)" tag near it, otherwise there will be conflicts with the mod title. James Dalcan (talk)

If you're going to change the title, you can differentiate it with the release date. (Insurgency (2012)) --Funkychinaman (talk) 07:14, 15 January 2015 (EST)
Officially i.e. on Steam, the standalone game is called Insurgency while the Source mod is called INSURGENCY: Modern Infantry Combat. That pretty much separates them. amyodov (talk) 23:52, 15 February 2016 (EST)

Is it possible to list the firearms available to download in the workshop? Or just the official ones? James Dalcan (talk)

Big new update has been added to the game and they added like 5-6 weapons. They include a Galil ARM for both teams, which can act as an ersatz LMG with a bipod and drum mag added. A S&W Model 10 was added, can be modified with and without speedloaders. The Insurgent's get a freaking Sterling SMG and the M1A1 is now a post-war M1 Carbine. The Security also get a L1A1 rifle and all grenade launchers get actual sights. Nice touches, especially that M1. PaperCake 18:59, 27 October 2015 (EST)

Yeah, but this isn't one of them. This is the same type of airsoft launcher that appeared in Modern Warfare 2. Look at the mounting system. 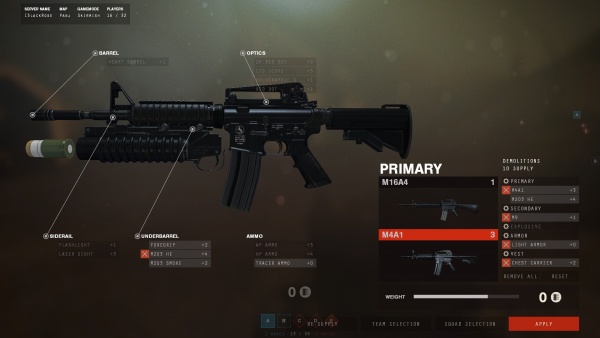 The Colt M4A1 in the customization screen with the M203

So, the WWII game mod for Insurgency, Day of Infamy has been officially released by the devs, so does this mean we can add them to the front page, or can we make like a section within the Discussion tab?

Also, a quick list of new weapons included in the mod:

I'm gonna have to remove some mods for the time being in order to get pictures, but this mod so amazing! Considering there's gonna be a British Forces addon coming up soon, this page is gonna have almost twice the guns it already has...... -- SSgt LuLZ 09:40, 29 January 2016 (GMT)

Born To Kill and Day of Infamy

Alright I think we need to rework this page a bit. Given that Day of Infamy has had a new independent release and page, I think we need to remove its section from this page. At the same time there is also the brand-new Born To Kill mod for the game. It's a Vietnam mod as the name suggests, and has a mix of borrowed weapons and models from Day of Infamy and Insurgency as well as brand-new models for firearms on both sides. Can we add that or does it fall into the same problem as other community made mods? -- --PaperCake 12:15, 3 January 2017 (EST)

I support the idea of removing DOI from this page, but I'd hold off on putting on BTK until it gets some sort of official release, given the current policy on mods (that, or it is both incredibly popular and well-known and makes a major enough change to the game that it gets its own page, like Project Reality). Pyr0m4n14c (talk) 17:45, 3 January 2017 (EST)

I mean the mod has now been given a spot within the Insurgency's quick match system, and it does have some fairly major changes to the base game like customizable characters. It's sitting in a bit of a grey area that Day of Infamy was in, it's a mod fairly distant from the original, but relies on the original engine and play style. I'll leave it up to the admins, but I think it deserves a page. --PaperCake 00:47, 22 January 2017 (EST)

I think we could make a test section here on the discussion page actually now that it seems like a lot of progress has been made on the mod.--AgentGumby (talk) 23:09, 26 February 2017 (EST)

Hey, SeptemberJack. Thanks for renaming pages! One small gripe: "(2014)" part bothers me a bit, but I'm the one to blame for that suggestion. When I said "'Insurgency (2014)' would be a better title and more fitting" in my previous message I meant it by comparison to old page name with number "2", so sorry for confusion. I feel like it's unnecessary part to add since there's no other video game titled "Insurgency" (the mod has subtitle to differ itself) imo. Thanks again. Terramax (talk) 08:46, 28 March 2017 (EDT)

To be honest I really only added the "(2014)" because the page for "Insurgency" redirects to the first page and not this one. I went for the sans-2014 option but it didn't let me do that because of the reason mentioned. I would fix it, but I don't know how. Might wanna ask someone else for help in that respect. -SeptemberJack (talk) 19:17, 28 March 2017 (EDT)