FN FS2000 Tactical with a C-more red dot sight and Monolith Arms rail system and P90-style foregrip - 5.56x45mm NATO. The latter accessory was discontinued when Monolith Arms was bought out by Magpul. 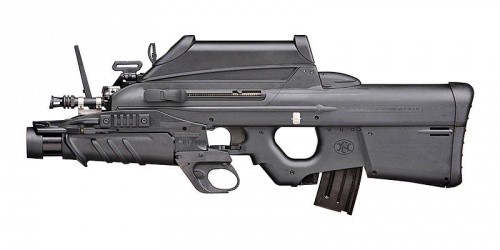 Partially disassembled F2000, showing the Picatinny rail present on the standard F2000. The rail of the F2000 Tactical is longer and raised.

I don't know why, but the gun reminds me of a P90 for some reason or another User:SeanWolf

Ok, so I don't know if anyone watches this guy on YouTube, but in this video here [1], FPSRussia is shooting an FN F2000 at a Justin Bieber poster (LOL, yeah I know it's hilarious) and he's firing the weapon in bursts. But when he gets to the 3rd burst, the gun seems to jam on him (or it's a possible stovepipe), and he racks the cocking handle twice, ejecting both a spent shell and several unfired rounds from the ejection port. While on the bottom of the screen, he comments that it's a "Belgian piece of s***!" Now my question here is, does this sort of thing normally happen with the FN F2000? And if so, is that the reason why some people hate this gun? --ThatoneguyJosh 01:44, 21 December 2011 (CST)

Have heard it is a picky gun. It is very particular about the ammunition it will reliably function with and only seems to like military stuff (SS109). I think the magazines are also an issue, in that using a standard aluminium STANAG (the magazine it comes with) you get double feeds and it is best to switch it out for a stronger steel one. I have shot an F2000 once (only a couple of mags) and I personally did not have any jams, but this was using military ammo. However the trigger was pretty awful, I found it isn't that easy to tell if the magazine is seated correctly and it doesn't fall free from the gun when you release it. In the above video, I imagine the situation wasn't helped by the guys total lack of proper stoppage drills. He didn't even remove the magazine let alone actually look in the action (the rounded part on the top of the gun directly above the magazine is a sprung chamber cover) to see what the problem was. --commando552 06:15, 21 December 2011 (CST)

Not really, the trigger pack is housed right at the rear of the gun in the stock, and the bolt needs to be free to recoil back into the stock. There is a vague possibility that you could make a rifle like this where the stock could be retracted for storage, however it would not be able to fire unless the stock was fully extended. --commando552 (talk) 19:02, 13 December 2015 (EST)