Talk:Dukes of Hazzard, The (TV series)

Since they are on probation, Bo Duke (John Schneider) and Luke Duke (Tom Wopat) are forced to use a Martin Warthog bow and arrow, often with dynamite attached, as their weapon. 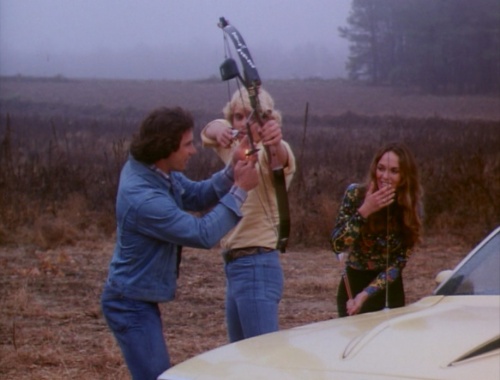 Luke lights the dynamite on Bo's arrow before firing it into a mob syndicate meeting in Episode 2. 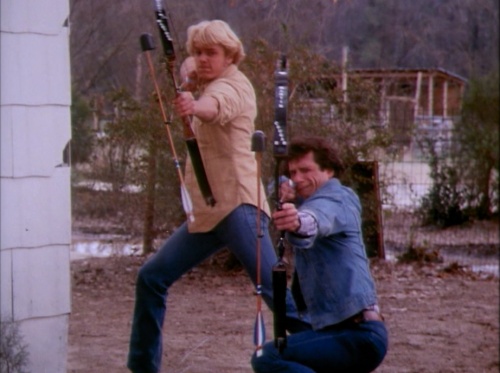 Bo and Luke aim their bows in Episode 3.

In Season 2, Episode 12 - Arrest Jesse Duke - the female car-stripping gang (Carla, Sally, Lil, and Jane) use at least three unknown handguns. In the scene where the Bo, Luke, and Daisy get caught by the female car-stripping gang in the stock room of Dixie Auto Supply, Carla holds them at gunpoint with what looks to be a medium-size-frame revolver of some sort. Carla fires what might be this same revolver at the Dukes during the following car chase scene. In the scene where Carla and Sally hold Boss Hogg and his nephew, Hughie Hogg, at gunpoint, and then rob Boss Hogg's safe, they each have a semi-automatic handgun. Both of them appear to be what I believe are Heckler & Koch P7 pistols. In the final off-road car chase scene, the female passenger of the yellow jeep fires a handgun four times at Bo and Daisy as they are pursuing the yellow jeep in their "General Lee" car. This handgun might also be one of the Heckler & Koch P7's that was used by Carla or Sally in the earlier scene where they robbed Boss Hogg. Kepiblanc (talk) 13:55, 5 August 2013 (EDT)